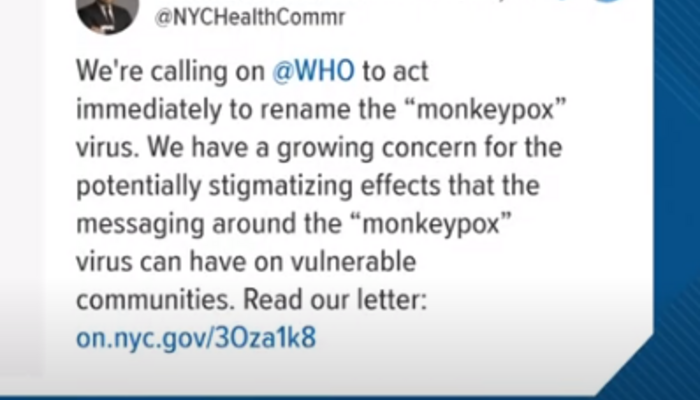 Are monkeys spreading monkeypox to humans?

Researchers say the answer is no. But recently in Brazil, the unfounded fear that monkeys transmit the virus to people has spurred an outbreak of violence against marmosets and capuchin monkeys, leading to the death of at least seven animals, according to Brazilian officials.

Just as the so-called Spanish Flu of 1918 wasn’t born on the Iberian Peninsula, the spread of monkeypox has little to do with monkeys. In fact scientists say that rodents are the most likely animal reservoir for the virus, which is a cousin of smallpox that made its first recorded leap to humans decades ago in the Democratic Republic of Congo. But in 1958, when Danish scientists first identified the virus in a colony of lab monkeys, they decided to bestow the naming honor on their captive primates.

Jacobs worked overtime, reaching back a half century to make “monkeypox” a racist term, even bringing in Ronald Reagan..

Monkeypox is more than just a misnomer. Many experts say the word evokes racist stereotypes, reinforces offensive tropes about Africa as a perilous, pestilence-filled continent and abets the kind of stigmatization that can prevent people from seeking medical care.

Western literature through the ages is replete with ugly comparisons of Black people to primates, and throughout the 19th and early 20th centuries, illustrations rendering African-Americans as having simian features were a staple of popular American newspapers and magazines. Such racist sentiments haven’t entirely faded. President Ronald Reagan, when he was governor of California, was caught on tape calling African diplomats “monkeys.” Over the decades, racist slurs and imagery involving apes have repeatedly been hurled against Black people, including prominent politicians and celebrities.

Jacobs, who covered all the liberal bases by suggesting the name “monkeypox” was both anti-gay and anti-black, was angered that President Trump accurately identified COVID as the “China Virus,” and used dubious crime figures to accuse the president of fomenting violence against Asians.

The naming of diseases has long been contentious and not just in Africa. In the first months after its emergence in China, the illness we call Covid-19 was unofficially dubbed “the Wuhan virus,” a designation that gained currency on social media before finding its way into the mainstream. What happened next was not entirely surprising: Violence against Asians surged in the United States and other countries. Business at Chinese restaurants evaporated. President Donald Trump repeatedly referred to the disease as “the China virus,” long after the W.H.O. had given the disease its current, banal-sounding moniker.

But these so-called best practices for naming new infectious diseases do not affect existing names that critics say have negative associations with actual places and people, like Rift Valley Fever, Middle East respiratory syndrome and Ebola, the hemorrhagic fever named for a river in Africa.

Jacobs made it sound like the names were just drawn out of a hat. Ebola, for instance, is called Ebola because the virus was first identified in the 1970s in a Congolese village near the…Ebola River. Ironically, it was named that because the virologist didn’t want to stigmatize the actual village, Yambuku. No good deed….

Meanwhile, the Times is still calling monkeypox, monkeypox. By his own wacky definition, doesn’t Jacobs’ employer risk having blood on its hands for spreading suck vile language?