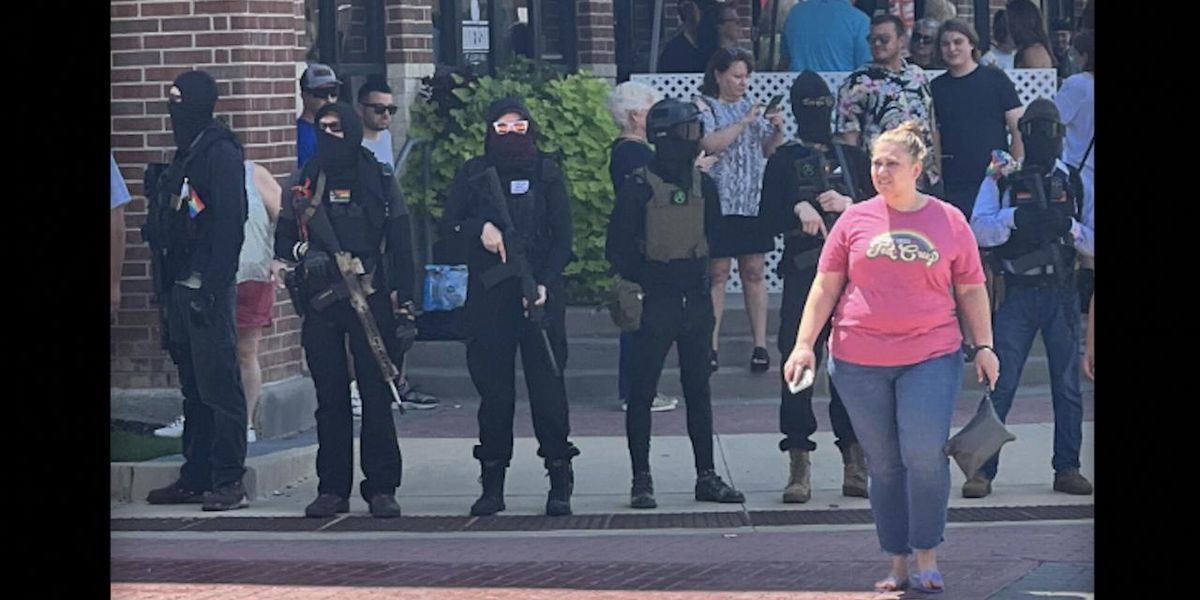 Masked Antifa militants were armed with rifles as they guarded a “kid-friendly” drag show near Dallas over the weekend — and a Texas Republican lawmaker told Fox News Tuesday that the violent leftist group’s intimidation tactics are “alarming.”

The Sunday morning “drag brunch” was held at the at Anderson Distillery and Grill in Roanoke, Fox News said.

BlazeTV host Sara Gonzales and porducer Kris Cruz, as well as independent journalist Tayler Hansen, were there and posted images and videos to Twitter.

u201cI was on the outside and it was wild. #Antifa showed as body guards for the attendees of the event. #Antifa and the staff worked together to provide u201cprotectionu201du201d

Fox News said police were there too amid tense stand-offs between protesters and counter-protesters.

u201cTo my knowledge and I walked both sides of the arguments. The only armed group I saw was #Antifa. #Antifa also posted u201cguardsu201d on each corner and inside the parking lot. They took pictures of all the vehicles that not supported the kids friendly drag show.u201d

About 20 children and multiple self-proclaimed teachers attended the event where drag queens performed and collected dollar bills, Fox News added, citing video from Hansen. For a more detailed account of what happened inside and outside the venue, check out this clip from Hansen and Gonzales.

What did Slaton have to say?

“It’s shocking to a lot of Texans, and we just need to stop it. We need to let children be children and protect them from any sexualization,” Republican state Rep. Bryan Slaton told Ashley Strohmier and Todd Piro of “Fox & Friends First.”

Slaton told the co-hosts that “kid-friendly drag shows” don’t exist, and he said he believes children must be protected in order to have a childhood and must be prevented from being sexualized at a young age.

As for Antifa showing up with weapons to guard the event, Slaton told the Fox News hosts that the radical leftist group’s actions are “alarming,” particularly as protecttion for “grown men wearing ladies’ underwear that have to dance provocatively in front of children.”

“They’re protecting that and trying to intimidate those that were there to speak out against it and bring attention to it that way,” he told Fox News. “But, yes, Antifa apparently is getting involved, and you’ve crossed the line if you want to protect children, and they want to intimidate you.”

Slaton also said it was concerning that law enforcement failed to take action to shut down the event due to it being over capacity according to the local fire code, Fox News added.