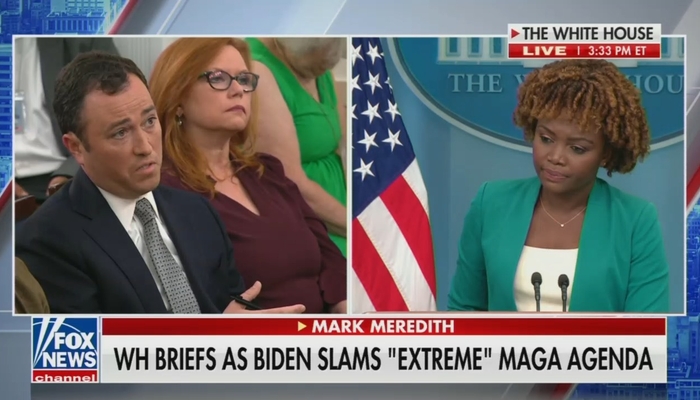 On Thursday afternoon, White House reporters rallied from the embarrassing effort many gave the day prior in lobbying softballs to inept Press Secretary Karine Jean-Pierre and showed skepticism that President Biden’s Thursday night address on how the American right poses a threat to the country wouldn’t be political.

Reuters’s Jeff Mason was one of those reporters who redeemed himself, starting with a short, Doocy-like question: “Is tonight a political speech?”

Jean-Pierre sowed her fate when she immediately show back: “No. It’s not a political speech. This is an opportunity — again for the President to directly have a conversation with the — with the — the American people.”

She added that Biden would “talk about the importance of engagement” and “voter participation” and “why” our system “is worth fighting for.” While that sounds nice, the excerpts released certainly don’t match up.

Mason further redeemed himself by wondering whether there’s “any concerns” that Biden’s “aggressive tone is also stoking the divisiveness that he’s trying to heal.”

Giving away the game, Jean-Pierre snarked that “we understand we hit a nerve” with the American right “trying to hide and we understand that ultra-MAGA officeholders want to play games here and dodge accountability for their extreme proposals and actions, but they’re just telling on themselves.”

She falsely added that Biden has “always squarely targeted his criticism on elected leaders” and he would continue to “not…shy away” from slamming them though Thursday’s “speech…will be optimistic.”

After Jean-Pierre claimed Thursday night’s speech would be about “so much bigger than any one party, any one person” (including Trump) and that “he’s been thinking about this for some time,” CBS’s Christina Ruffini looped back in Mason’s exchange:

But if that includes things that you were saying to one of my colleague’s questions, you know, this concern about this MAGA Republican, this extremist agenda and that’s something he’s going to talk about tonight, how is that not a political speech?

Jean-Pierre disingenuously reiterated that “this is not about one political party” or “one person,” but thankfully other reporters didn’t buy it.

NPR’s Tamara Keith had a great question about students falling behind due to school closures, but she first asked about the speech by wondering how would Biden “deliver an optimistic speech” since “the majority of Americans saying they’re concerned about American democracy and something like 40 percent of Americans saying that they think Civil War could happen in the next ten years.” 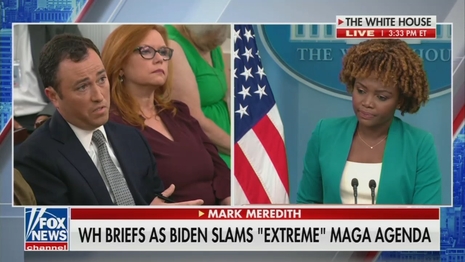 NBC’s Kelly O’Donnell and Fox’s Mark Meredith were most biting and probing to this disconnect between Jean-Pierre’s spin about the speech being a glorified high school civics lessons and the administration’s virulent rhetoric against the millions of Americans who disagree with them.

This led Jean-Pierre to argue it’s only a “very small piece” of the Republican Party (click “expand”):

O’DONNELL: What do think the President message tonight is for Americans who consider themselves Republicans or may still support the former President? Is there something in the speech directed to them?

JEAN-PIERRE: Well, look, the President really does believe that this — that what he’s going to talk about is something that many Americans are going to care about. It doesn’t matter which side of the aisle…you sit at when you think about the possibilities of our democracy, when you think about how we are going to fight for — to protect our rights — right — to protect our democracy. He thinks that’s going to touch a lot of people…[W]hen we talk about the extremism, we’re talking about a very small piece, component of the American public, all right? We’re talking about very small component of — of MAGA Republicans in Congress. That — that is something that they believe, right? But we know and the President believes and is optimistic that there are many — many Americans who want to continue to make sure that we uphold our democracy…He’s going to lay a path forward and — and that’s what matters and that’s why it’s not — he’s not going to focus on a political party’s not going to focus on a political person.

MEREDITH: Going back to tonight’s speech, obviously, you said that the President’s going to be calling out these lawmakers that MAGA lawmakers in Congress, but yet, 74 million people vote for Trump last around. You said it’s a small number of — the White House believes are extremists. Can you give us an idea of — ballpark? Are we talking a million of that 74 million? Are we talking about one percent? 20 percent? What kind of number are we talking about?

MEREDITH: So, if it’s MAGA officeholders, we’ve seen Democratic groups — something like the Democratic Governors Association, boost Trump candidates like Maryland. You think of Dan Cox who just got the nomination. Is that then hypocritical if you’re saying we’ve got to make sure these MAGA supporters are not in office, but you’ve got Democratic groups that are boosting their campaigns in the primary election?

JEAN-PIERRE: I mean, I can’t talk about campaigns and what another — another candidate is doing or a committee is doing, I can’t speak from that from here. Look, I can say this. The President has been on has always been clear. They’re going to be people who disagree with his programs and legislative priorities and that’s what democracy is all about. Like, we understand that — right — but people election and we move forward as a nation — right — but there is a growing number of people who refuse to accept the results of free and fair elections, people who actually openly talking about subverting elections in the future. This is not a speech where he’s going to tell people to vote for one party or the other. That’s not what he’s going to do.

Real Clear Politics’s Philip Wegmann took one piece of the right that have drawn particular ire from the White House and their allies: pro-lifers.

WEGMANN: Returning to our discussion from yesterday, following up on some of the things that you’ve said today. I just want to clarify: Does the President believe that the effort to restrict abortion, to restrict that freedom is semi-fascism?

JEAN-PIERRE: Say that — how is that connected to yesterday? I’m just trying to think.

WEGMANN: So, in terms of extremism — the extremism conversation that we were having yesterday. Does the President believe that the effort to restrict abortion, whether it’s at the local level or the federal level, to restrict that freedom, does he believe it is semi-fascism?

JEAN-PIERRE: I mean, he was very clear. He was very clear that MAGA Republicans in Congress have an agenda that is extreme and that’s what you hear from them of the national ban on abortion is extreme and also it’s not in line where majority of Americans are. It is just not. It is taking away people’s rights. It is taking away people’s freedoms. And you know, he doesn’t, he believes that is an extreme agenda. You’ve heard that from him directly. I don’t even need to confirm that from here. He’s actually talked about how extreme it is when we saw what — what was done with the Dobbs decision on June 24th to take away a right take away a right that people had for 50 years — a constitutional right for 50 years that women had to make a decision for themselves on their health care. And — and so, yeah, we see that as extreme.

WEGMANN: So — but I’m trying to figure out which bucket in particular to put it in because the administration as well as the President has used different language here. There’s extremism and then there’s also semi-fascism moniker that he used. I mean, this is an effort that has been around for a long-time. Does he believe that this movement working through, whether it’s the state legislature, or Congress is in either of those buckets?

WEGMANN: But specifically with regards to limiting these freedoms, I guess my question, is he Supreme Court created this space for the anti-abortion movement at the state level and also perhaps at the federal level to restrict this freedom? Where do they fit into all of this? How would  the President describe them after that decision? Were they just extremists or they, you know, part and parcel of a semi-fascists —

JEAN-PIERRE: Look…[w]e continue to see attacks on people’s fundamental rights…with new abortion laws across the country. And when you have national Republicans…who say that they want to take away the rights, even in case of incest and…in case…of rape…That’s extreme. And — and you know, the President’s going to call that out. He’s going to continue to do everything that he can to make sure that we protect people’s freedoms.