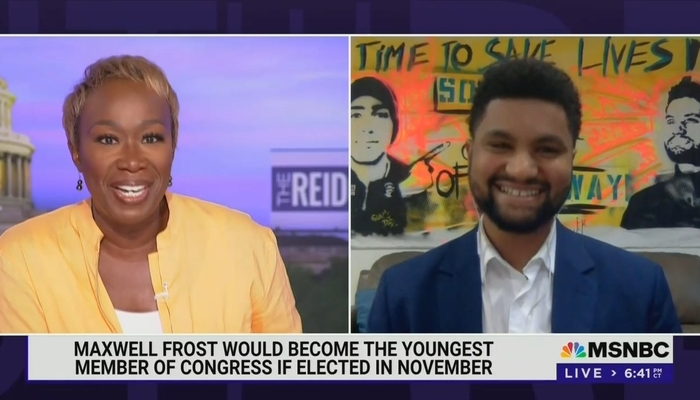 There’s a hot new young socialist Democrat candidate for Congress that the leftist media are heavily promoting, like he’s the Alexandria Ocasio-Cortez of this cycle. It’s Maxwell Frost, a 25-year-old veteran of the gun-grabbing March For Our Lives lobbying group. As one colleague put it to me, “They’re going to put a rocket on this kid’s back.”

Frost might not make the cover of glossy magazines like AOC did, unless he’s like singer Harry Styles and wears a dress to get on the cover of Vogue. But the radical lefties at Teen Vogue were promoting Frost before he even won the primary. Like AOC, he’s a pretty safe bet to win in November. He won the Democrat primary in Florida’s 10th District in Orlando, which went 62 percent for Biden in 2020.

I counted at least eight national TV interviews in the week after he won, five of them on MSNBC. Every interviewer threw him softball questions, as you might expect. No one would take issue with his backing of gun bans, climate crackdowns, “Medicare for All,” and abortion on demand.

It began on The Reidout on August 25, where MSNBC’s Joy Reid gushed “You are an impressive young man. I hope I can hang out with you when I come to Florida.” She ended comically with “Matthew Frost, remember that name, y’all, He’s a star!” Ahem — it’s Maxwell, not Matthew.

On the next day, Frost was celebrated on ABC’s midday news show GMA3: What You Need to Know. After the softball questions, anchor T.J. Holmes concluded with “My man, it is really a pleasure to talk to you! It is so good, and encouraging, and refreshing to see someone like you involved in the process. Good luck to you!”

A few hours later, Nicolle Wallace took a turn on her MSNBC show Deadline: White House and suggested people count out the young voters, and nudged him to explain how they could become more reliable (Democrat) voters.

Frost was also promoted on the PBS news show Washington Week that evening, although he was not interviewed. Black CNN reporter Eva McKend gushed “This is where the energy is in the Democratic Party, with young progressives of color.” She warned “octogenarians in power” should support them and not stand in their way.

CNN reporter Eva McKend touts the far left on PBS: “This is where the energy is in the Democratic party, with young Progressives of color….I think what I am watching is, are the octogenarians in power going to support them, or are they going to stand in the way?” pic.twitter.com/woFZW3Z7mZ

On Saturday, Frost appeared on MSNBC’s American Voices with Alicia Menendez, the daughter of Sen. Bob Menendez (D-N.J.) She asked about his gun activism: “Can you talk for just a little bit about the life experience, the life perspective that brings you to this moment?”

On Sunday, it was MSNBC’s The Sunday Show with Jonathan Capehart, guest-hosted by former RNC chairman Michael Steele, who touted Biden’s move to forgive billions of dollars in student loans. Steele wondered: “Do you think that will help bring more young people to the polls?”

Frost also appeared on the network again that night on The Mehdi Hasan Show.

Frost is Afro-Cuban and fluent in Spanish, so he was dutifully promoted on Spanish-language television. On Sunday, he appeared on Univision’s Al Punto with Jorge Ramos, whose daughter Paola worked for Hillary’s presidential campaign. On Tuesday, he showed up for an interview on Directo USA on CNN En Espanol, where anchor Ione Molinares touted his endorsements from socialists Bernie Sanders and Elizabeth Warren.

Never let liberals lecture about how Fox News is a soft-touch propaganda channel for Republican talking points when you can see how this Generation Z Democrat darling drew only the gush and the mush from the badly named “mainstream media.”

Young Orlando socialist ‘Maxwell Alejandro Frost’ is also ‘Afro-Cuban,’ so he can draw puffball interviews in Spanish, too! Like on CNN En Espanol… pic.twitter.com/m694SCmrTY

‘Kansas doesn’t have a brand’: People sound off after Democratic NYC Mayor Eric Adams says that ‘New York has a brand,’ but Kansas does not
NBC Wonders: Are We in a Recession? Who Cares! It’s Tough Out There!
QUASH! YouTube Removes Future Italian PM’s Speech After It Goes Viral
Video: Mother, teen daughter carjacked in their own driveway after handgun-toting crook apparently waited for them to exit Philly home early in morning
Would Biden Run in 2024 Without Kamala Harris?