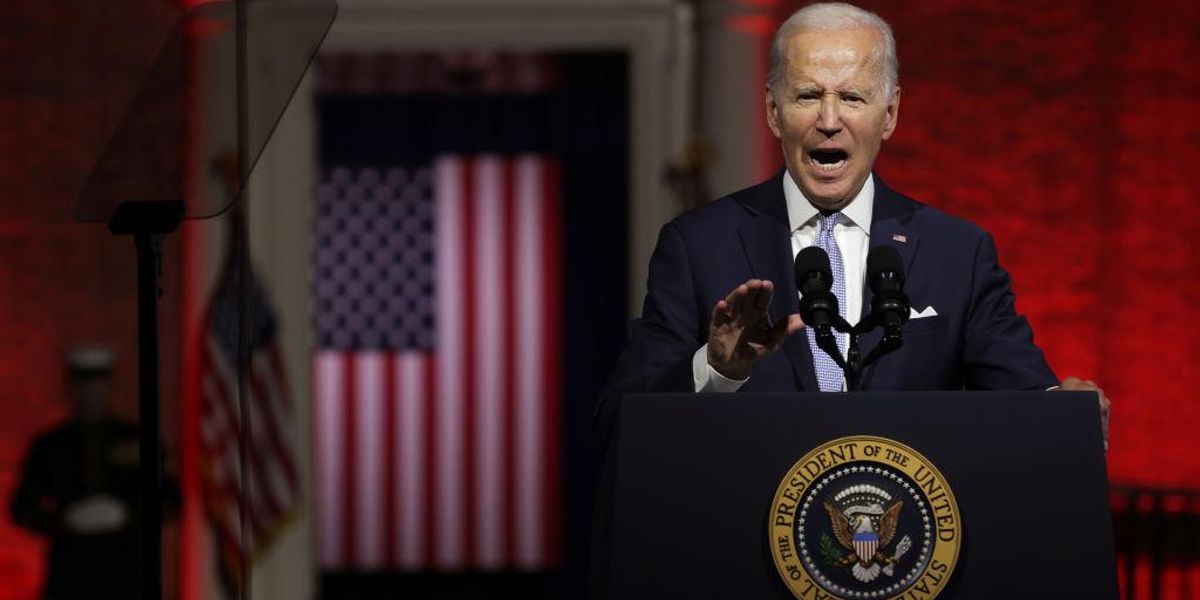 Speaking in front of Independence Hall in Philadelphia, Biden delivered a speech billed as the “Battle for the Soul of the Nation.” Biden claimed that Trump and MAGA Republicans “represent an extremism that threatens the very foundations of our republic.”

“And here, in my view, is what is true: MAGA Republicans do not respect the Constitution,” Biden said. “They do not believe in the rule of law. They do not recognize the will of the people.”

Biden quoted J. Michael Luttig – a former Court of Appeals judge for the Fourth Circuit – who called Trump a “clear and present danger” to American democracy during a Jan. 6 committee hearing in June.

Biden warned Americans that they are now at an “inflection point” and said it is within our power to “stop the assault on American democracy.”

He said MAGA Republicans “embrace anger,” “thrive on chaos,” and “live not in the light of truth but in the shadow of lies.”

President Biden declared, “We’re all called, by duty and conscience, to confront extremists who will put their own pursuit of power above all else.”

“The speech last night to me sounded like a president delivering a wartime address,” Robinson said during a Friday morning appearance on MSNBC’s “Morning Joe.”

“To me, the significant thing was, yes, he called out Donald Trump — but he also called out the MAGA Republicans, the MAGA Republican officials and followers, who, you know, for whatever motive, under whatever delusion, are going down this authoritarian path, this undemocratic path and trying to take the nation with them,” Robinson continued.

“And he framed this as an emergency, as something that we as a nation need to bond together and to stop, and to reverse, and to return to our democratic principles and our democratic practices,” Robinson added. “And to me, it was an urgent wartime address.”

u201cWATCH: WaPo columnist Eugene Robinson says Biden’s unhinged attack on Republicans last night was a “wartime address.”nnThe left really thinks anyone who disagrees with them is the enemy.u201d

Writer Pradheep J. Shanker: “Do you guys hear yourselves?”

Conservative activist Daniel Garza: “Wartime? Stop. This is foolish, dangerous rhetoric by President Biden & Co. You don’t ask Americans to forsake own family, neighbors or friends over politics. And to do so in order to favor a side they vehemently disagree with. It won’t go the way you think it will.”

Conservative commentator Sean Davis: “Who is the Biden regime at war with and how will the regime win this war? Be specific.”

Conservative activist William Ruger: “Did I miss a speech on Syria or Iraq or anything else allegedly covered by an Authorization for Use of Military Force?”

Conservative commentator Kurt Schlichter: “You idiot. If it ever is wartime, you’ll know it.”

Conservative activist Michael Quinn Sullivan: “‘Wartime address’… So, at least the Democrats admit they are at war with the rest of the nation. It is a shame Republicans won’t admit it.”

Earlier this week, President Biden mocked “brave right-wing” Americans by telling them they will need more than guns to fight back against the government.

“For those brave right-wing Americans who say it’s all about keeping America, keeping America independent and safe, if you want to fight against the country, you need an F-15. You need something a little more than a gun,” Biden stated.

u201cJoe Biden:nn”For those brave right-wing Americans who say it’s all about keeping Americans independent and safe, if you want to fight against a country you need an F-15. You need something a little more than a gun.”u201d