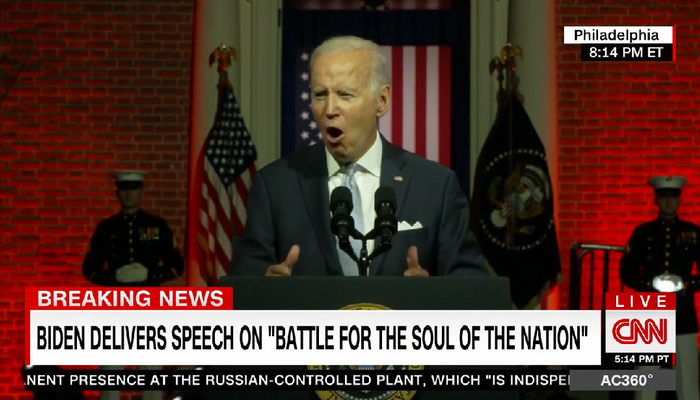 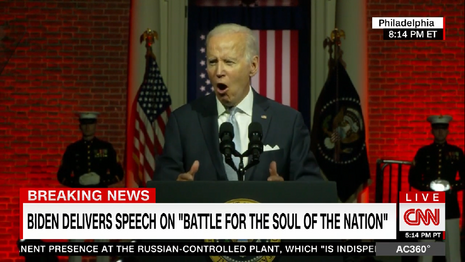 As a reflection of just how poorly Joe Biden’s dark speech in Philadelphia on Thursday about what he labeled as MAGA extremism was received, even a number of liberals criticized it.

Among those who panned Biden’s speech was Washington Post columnist James Hohmann who is usually reliably liberal. However, in an analysis immediately following Biden’s speech, Hohmann was strongly critical about what he heard and saw.

It was a mish-mash. It was two different speeches merged into one. It sounded strident. It sounded quite partisan including the “Vote! Vote! Vote!” there. It was not what the White House previewed in that respect. And I think part of it is that those hecklers and protestors got into the President’s head. He was angry. He was yelling. The lighting in the backdrop was bad. I think what happened is that the White House advance team had the American flag red, white, and blue but all you could see on the camera shots at home for anyone watching was the red which was quite an ominous color.

I thought the most powerful moment of the speech was when Biden went off-script to engage with the hecklers to say this is democracy, this is what they are entitled to do, you should be able to do it, and then said these folks have never suffered from having manners. That was the kind of authenticity, rawness that is quintessentially Joe Biden, but this was not one of the President’s best speeches.

Yes, pretty strong criticism considering the source despite the slight relapse at the end when Hohmann praises Biden’s “authenticity” for acknowledging that the hecklers had a right to disagree despite simultaneously smearing them as a danger to the country. Unfortunately, for Hohmann even that caveat might not be enough to save him from shunning by his fellow liberals.

A few minutes later, Hohmann sounded a more positive note, that “if Biden can make the midterms a referendum on MAGA ideology, Democrats will far outperform expectations.” That’s apparently the hope among Democrats, to make this about the last president and not how badly the current president is failing the country. But Hohmann dialed it back a little to note “the more traditional liberal planks in Biden’s agenda” still risk turning off independent voters and more moderate Republicans.

Am I The Only One Who Remembers When Dictionaries Were the Authority on Words?
The MRC at 35: Imagine If Reagan Had a Conservative Media Like Today’s
9th Circuit Court strikes down California law that would have forced ICE to move migrant detainees to other states
No Matter What Happens in Iran, the Women Have Already Won
Trending Search in Russia: ‘How to Break Your Arm at Home’