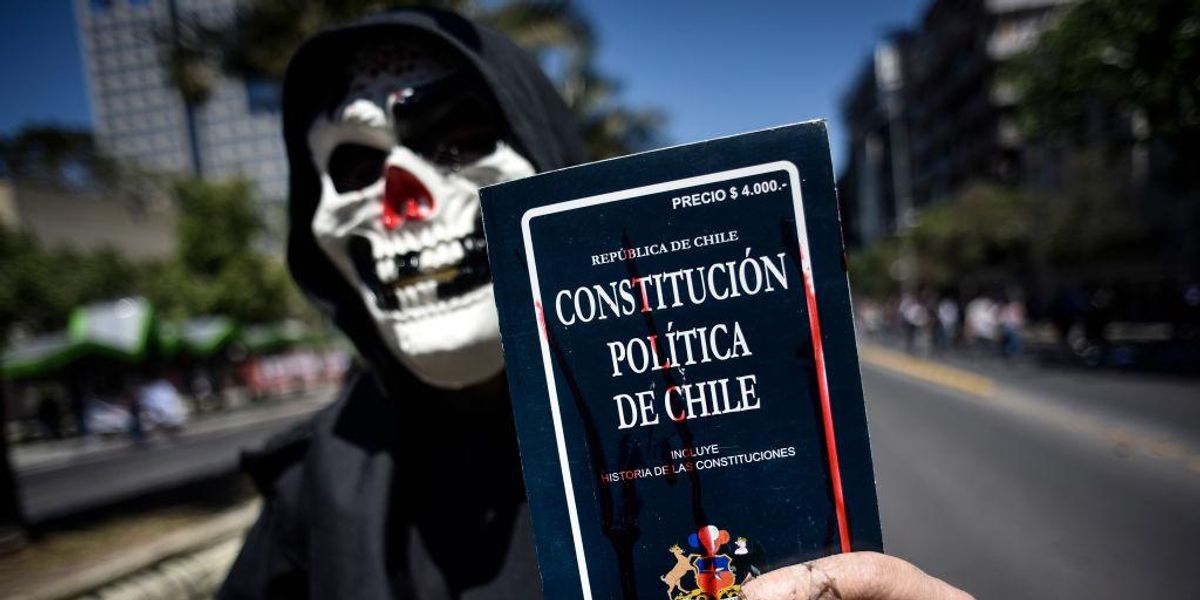 On September 4, Chileans had a referendum on whether to accept the leftist government’s proposed new constitution: a 170-page document containing 388 articles, which would enshrine 100 rights including the right to: a “nutritionally complete” diet; “leisure”; “neurodiversity”; equality for “sexual and gender diversities and dissidences, both in the public and private spheres”; housing; sex parity in all public institutions; and to free education.

Every single one of the nation’s 16 regions voted “no.”

In the mandatory vote, approximately 62% of Chile’s 19 million residents rejected the constitution, which was written by a convention composed equally of men and women.

The proposed constitution would have greatly increased the size, scope, and power of the government.

According to Javier Couso, professor at Diego Portales University, it would also have made the country a “less business-friendly environment than what the Chilean entrepreneurs are used to.” The government could seize mines and other properties, but instead of paying the owners the market value, the government would only have to pay a “fair price” set by one of its judges.

Article 64 of the proposed constitution stated, “Every person has the right to the free development and full recognition of their identity, in all its dimensions and manifestations, including sexual characteristics, gender identities and expressions, and sex-affective orientations.” Extra to conferring this right, the state would guarantee the exercise of “identity” through “laws, affirmative actions and procedures.”

Also required by the document (under Article 6): Women must compose over 50% of all public institutions’ members. While women could compose a supermajority in a given ministry or on a semi-public board, and men but a sliver minority, the reverse would be illegal.

The referendum result presents a major setback to Gabriel Boric, the country’s 36-year-old president and leader of the leftist Social Convergence party, who had been a cheerleader for the constitution-rewriting process.

On July 4, Boric said “Once more, it will be the people who have the final say on their destiny.” Since prior to this defeat, his approval rating was 38%, the destiny of Chile’s president is now in question.

Mauricio Morales, a professor of political science at the Universidad de Talca, indicated this “is a very significant political, ideological and strategic defeat for President Boric.” Morales suggested the rejection of the proposed constitution will “inevitably fracture the governing coalition.”

After having the document he lobbied hard to advance fail by a 24-point margin, Boric said the results indicate that the Chilean people “were not satisfied with the constitutional proposal that the convention presented to Chile.”

Boric suggested that the process to amend his government’s substitute for Augusto Pinochet’s 1980 constitution would continue in hopes of crafting a charter “that unites us as a country.”

To the drawing board

The push to replace General Augusto Pinochet’s 1980 constitution was largely a response to the student- and anarchist-led riots that kicked off in 2019, triggered in part by a rise in metro transit fares. Dozens of deaths were reported in the clashes between police and rioters. Millions subsequently took to the streets in Santiago, demanding political change.

In an October 2020 plebiscite, 78% of Chileans voted to change the country’s constitution. Even Sebastián Piñera, who was the Chilean president at the time, suggested the inevitability of a constitutional overhaul, noting the vote’s results signaled “the beginning of a path that we must all walk together.”

In 2021, Chileans elected delegates to a constitutional convention. The resultant 155-member assembly was composed primarily of leftists (i.e. socialists, communists, and progressives) and independents.

One conservative delegate, Arturo Zúñiga, anticipated that the leftist skew would produce a result the nation would be unhappy with: “The proposal is radical because it represents only one sector of the left, which is obviously not what our country wants.”

A spokesman for the Citizens’ House for Rejection, Carlos Salinas, said after Sunday’s vote: “Today we’re consolidating a great majority of Chileans who saw rejection as a path of hope.”

NPR Roots Against the NFL, Like It’s a Uniquely American Sickness
CROWDER breaks down why Russians seemingly turned on Putin
Texas man hit and killed a pedestrian but didn’t realize it until he found the body later on the roof of his car, police said
Study reveals hiring bias at US universities; most professors come from small number of programs
Kamala Harris to Visit DMZ Thursday