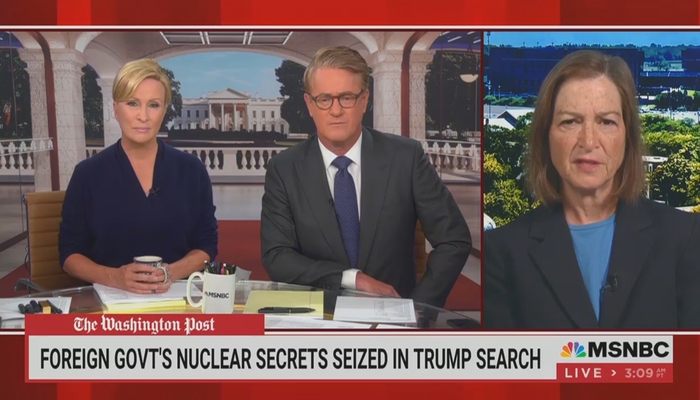 Forget about measuring the Oval Office drapes, Donald Trump! Time to start measuring you for the proverbial orange jumpsuit! Because your indictment on serious federal charges is a certainty. How do we know? Because Morning Joe has proclaimed it!

On Wednesday’s show, former US Attorney Barbara McQuade first said it would be “almost impossible” for the DOJ to decline to bring charges against the former President for his handling of national security documents. But moments later, McQuade revised her remarks, dropping the qualifier and saying flat out that it would be “impossible” for DOJ not to indict Trump.

After the logorrhea-afflicted Scarborough—finally—finished what even he admitted was “a very long windup,” he got around to saying:

“At this point, as Barbara said, a very long windup here just to say, I agree with Barbara. Donald Trump has given Merrick Garland no choice but to bring charges against him in this case.”

So there you have it. Done deal. Merrick Garland has been issued his marching orders. An indictment of Donald Trump is inevitably to follow.

The only suspense: will Trump be busted COPS-style, warming the cockles of Tiffany Cross‘s heart?

Note: The late, great, Rush Limbaugh coined “Gorbasm” to describe the liberal media’s infatuation with the recently-late former Soviet leader. But even those moments of ecstasy would pale should Morning Joe‘s prediction of a Trump indictment come to pass.

But Scarborough and his buddies should be—very— careful about what they wish for. A Trump indictment could backfire against liberals in various ways. The conservative backlash could propel Trump to the Republican presidential nomination, and potential election. Alternatively, should Trump decide to sit 2024 out to fight the charges, it could clear the way for a Republican nominee with all of the appeal of Trump and none of the baggage.

On Morning Joe, Joe Scarborough agreeing with MSNBC legal analyst Barbara McQuade that it is “impossible” for the Justice Department not to bring criminal charges against Donald Trump was sponsored in part by 4Imprint, Publishers Clearing House, and GlaxoSmithKline, maker of Trelegy.

JOE SCARBOROUGH: Barbara, break this, break this down for us. If the Washington Post reporting plays out correctly, what are the consequences of having top secret documents that even people, some of the most highest ranking people inside of his White House, and in the national security apparatus would not have clearance to see these documents.

BARBARA MCQUADE: Well, Joe, I think there are two things about this that are very significant. One is, regardless of classification level, it is clear now that this relates to national defense information. And that’s the language of the espionage act.

And so, Donald Trump can claim to have declassified documents all day. He might even have been successful, and that would be no defense to this claim.

The other thing that I think is significant about this is, it makes it almost impossible for the Justice Department to decline to bring criminal charges. You know, we talk about how they exercise discretion, sometimes there are technical violations but unless there are aggravating factors sometimes they’ll decline and just get their documents back and be on their way.

I think with something that is as egregious as this, it would really be impossible for them to decline.

JOE SCARBOROUGH: Well, as Barbara said, there are, are — despite the fact there are many of us, and I count myself as, as, as one of those, though I know many people watching would disagree with me, who I count myself as one of those deeply, deeply disturbed by past presidents being indicted. Past presidents being tried. I do think despite all of Richard Nixon’s crimes, that Gerald Ford did the right thing [in pardoning Nixon.]

We get to a point, though, in this case, and Jonathan Lemire, we get to that point where there is starting, at least among legal experts, for there to be a consistency on the right, the center and the left. That what was done was so egregious, was such a violation of what presidents have done in the past.

SCARBOROUGH: And was so unprecedented, that there does seem to be a consensus coming from the right. I’ve read op-eds saying Donald Trump is going to be convicted because it’s an obvious case, from the New York Post, Andy Mccarthy. From Andrew Napolitano in the Washington Times. I’ve heard it from Karl Rove on Fox News. We’ve now heard it from Bill Barr on Fox News several times, that this is pretty much an open-and-shut case.

And maybe, just maybe, that is the consensus, at least among legal experts on both sides of the ideological divide that makes this — makes this a little more possible for the Justice Department to move forward with charges, without them being blasted as being political by both sides — by one side or the other.

At this point, as Barbara said—a very long windup here just to say, I agree with Barbara. Donald Trump has given Merrick Garland no choice but to bring charges against him in this case.