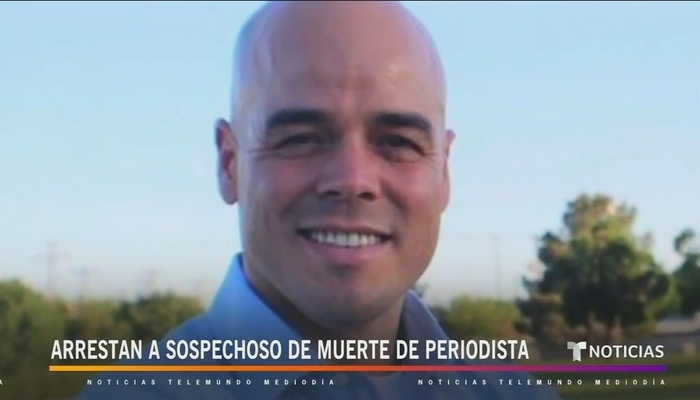 Univision and Telemundo gave a master class today on how to omit inconvenient news during their reports on the arrest of Las Vegas Clark County Public Administrator Robert Telles- taken into custody in connection with the murder of investigative journalist Jeff German. Both networks called him a politician, a civil servant, the suspect, and public administrator, WITHOUT mentioning once that he is an elected Democrat.

The decision to omit the key (D)detail from their reports of the murder confirms the lengths to which the main sources of news for Spanish-speaking audiences in the nation go in their shared mission of sanctifying Democrats.

Take a look at something that you will never see on Latino media when the news involves a Republican:

Both reports began with a brief description of the events leading to the stabbing of the investigative reporter from the Las Vegas Review-Journal, who had brought to light supposed irregularities in the office of the “suspect”.

Univision reported that “since last May, Telles had been the focus of several investigations led by the reporter (German) who had brought to light a series of accusations about intimidation and reprisals, as well as emotional stress and favoritism within the office of the official. It is presumed that thanks to these accusations he lost his candidacy for re-election in the June primaries, which generated great tension between the two and led the police to start this investigation.” As you can see, information about the re-election, including for which political party, was left out of the air.

Same at Telemundo: “The investigative reporter published a broad story about corruption that affected the career of Telles, and due to it, German lost the last election.” Again, details about the election didn’t make the cut.

It is hard to imagine Republicans getting the same deference from Latino-interest media. Such is the bias that passes for reporting at the nation’s leading Spanish-speaking corporate media.

Help the MRC fight against bias in the media. Follow this link for more information.