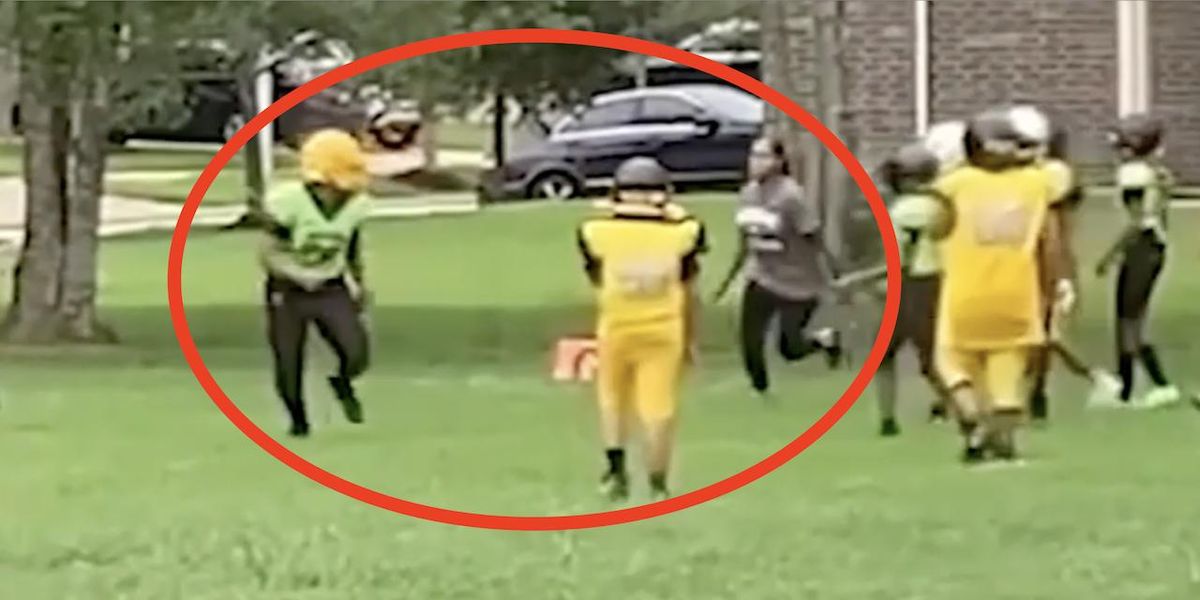 A mother chased and allegedly threatened to slap a 12-year-old youth football player who tackled her son during a recent game, KTRK-TV reported.

Video caught the moment the incident occurred during the first game of the season earlier this month between the Southside Ravens and the Northwest Gorillas of the Youth Football and Cheerleading Federation in Houston, the station said.

The clip shows the 12-year-old player in a green jersey and yellow helmet making a tackle near the sideline, then getting up and pointing back toward where he made the tackle.

The mother in question then runs on the field and chases the 12-year-old tackler, who in turn runs from her with his hands in the air.

Here are some looks at cellphone video of what went down:

Witnesses said the woman was upset the 12-year-old tackled her child, KTRK reported, adding that the game was cut short because of the incident.

While the woman never touched the 12-year-old player, the station said the victim’s mother filed a police report.

The youth league said the parent in question was a substantial threat and violated multiple conduct policies, KTRK reported.

This was an incident that could have ended much worse than it did. A parent running onto the game field after an opposing team player can have a counter-effect of the child’s parent(s) responding in kind in defense of their own child, not to mention potential reactions of the staff members of both teams. Fortunately, the staff of both teams were able to get things under control and did not allow the incident to escalate. An assigned on-site police officer further de-escalated things by escorting the offending party out of the facility. This particular facility does not afford itself to our standard access control policies since it is basically an open field with multiple entry points, and has no barriers between spectators and the game field.”

Hart added to KTRK that the woman who chased the player has been permanently banned from all league events and activities — and the rest of her family and children have been similarly banned.

What’s more, the woman was fined $200, and her son’s former team — the Northwest Gorillas — was fined $500, accused of not controlling the sideline, the station said.

The mother of the chased player told KTRK no one has personally apologized to her or her family but added that she’s glad the league took action to keep the children safe.

The station said it wasn’t able to speak to the woman who chased the player, but KTRK added that her son’s team, the Northwest Gorillas, issued an apology on social media, which also noted in part that “our parents felt their children were not safe due to the level of aggression displayed by players and opposing parents” and “despite the behavior that was displayed by the opponent team, there was no reason that it escalated to that degree or manner. We are sincerely regretful on how this has affected everyone in and outside of our organization.”