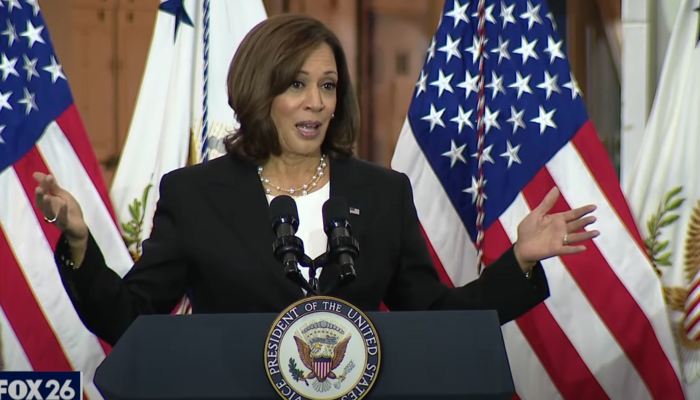 The gaffes, blunders and embarrassing moments keep piling up for Kamala – yet the broadcast evening newscasts keep covering up the Vice President’s mistakes. It happened again this weekend when there was ZERO evening newscast coverage of Harris’s “the border is secure” error.

It’s a point NewsBusters made back in January – If a Republican Vice President (think Mike Pence, Dick Cheney and Dan Quayle) had put up as many “L’s” Harris has, you’d better believe the Big Three network (ABC, CBS, NBC) evening news broadcasts would have flooded their shows with stories about the bumbling VP.

But because the network evening news shows are so in the tank for the Joe Biden administration, they’ve almost COMPLETELY ignored some of Vice President Harris’s most embarrassing mishaps.

Harris Declares Border is “Secure,” Despite Thousands of Illegals Flooding Through It

On September 12, FoxNews.com reported the following:

Vice President Kamala Harris twice declared the U.S. southern border is “secure” during an interview Sunday, despite the tens of thousands of illegal immigrants who routinely cross into the country every month.

During an interview on “Meet the Press” aired during the 21st anniversary of the Sept. 11, 2001, terrorist attacks, Harris was asked by NBC News anchor Chuck Todd whether the border is secure. The vice president responded that the immigration system was “broken” under the Trump administration and still “needs to be fixed.”

“I think that there is no question that we have to do what the president and I asked Congress to do, the first request we made: pass a bill to create a pathway to citizenship,” Harris said. “The border is secure, but we also have a broken immigration system, in particular, over the last four years before we came in, and it needs to be fixed.”

Todd pushed back against Harris’ claim about the border being secure.

“We’re going to have two million people cross this border for the first time ever. You’re confident this border’s secure?” Todd asked. “We have a secure border in that that is a priority for any nation, including ours and our administration,” Harris replied.

Out of Solidarity with Labor Activists, Harris Falsely Claimed She Didn’t Eat a Grape Until Her 20’s

On September 5, the New York Post reported the following:

Vice President Kamala Harris claimed in an interview for Labor Day that she first tried grapes in her 20s because she would “never cross a picket line” — but a review of dates involved reveals problems with the account.

Eating table grapes was shunned by labor activists from the time Harris was 19 to 36 — meaning Harris would have indeed flouted a picket line if her story is true.

“This sounds quaint, and so I’m reluctant to say it, but, you know, I didn’t eat a grape until I was in my 20s,” Harris told The Nation in an interview published Monday.

“Like, literally, had never had a grape. I remember the first time I had a grape, I went, ‘Wow! This is quite tasty.’ It was absolutely ingrained so deeply in me: Never cross a picket line.”

But Harris’ story is inconsistent with the timeline of the three major grape boycotts spearheaded by the Cesar Chavez-led United Farm Workers. The UFW launched its third and longest California grape boycott in June 1984, just over four months before Harris’ 20th birthday, and it lasted until 2000 when Harris was 36.

The vice president’s office did not immediately respond to The Post’s request for comment on the discrepancy.

It’s not the first story told by Harris to raise eyebrows and during the 2020 campaign then-President Donald Trump and his allies attacked Harris as an unprincipled “phony.” Detractors say that Harris lied in a 2019 radio interview about smoking pot in college while listening to Tupac and Snoop Dogg.

Way Too PC: Harris Feels the Need to Add “Womankind” to Statement

On August 29, the Daily Mail reported the following:

Vice President Kamala Harris got off to a politically correct start when she landed in Orlando Sunday ahead of Monday’s planned Artemis I rocket launch.

“The Artemis program is the beginning of the next era of what we have a history and a tradition of doing – of providing vision and inspiring innovation – in a way that is going to benefit all mankind and womankind,” Harris told reporters.

On Monday, however, the Artemis I launch got scrubbed due to a temperature issue with one of the engines.

As The Daily Wire’s Ben Shapiro pointed out, there was no need to add “womankind:”

“I hate to break it to people who don’t know etymology. The word mankind includes women. They’re talking about the species.”

On March 18, The Business Insider reported the following:

That’s the party’s newest message to voters as the November midterm elections approach. But there’s a big catch for the Democratic leaders who are touting one of their most significant economic accomplishments during the Biden era via a particular talking point that’s coming up over and over again.

The American Rescue Plan resulted in “children out of poverty,” House Speaker Nancy Pelosi said on Thursday. “People out of poverty, we’ve done a great job.”

“Poverty for all children, including Black children, Hispanic children, were at the lowest levels ever recorded in our first year,” President Joe Biden told members of the Democratic National Committee at a winter meeting on March 10.

That big catch? The policy that Democrats keep boasting about to pull off this feat actually expired late last year, plunging millions of children around the country back into poverty.

Harris Announces Her Pronouns, Adds: “I Am a Woman”

On July 26, the Daily Mail reported the following:

Kamala Harris opened up a roundtable meeting Tuesday afternoon with disability advocates by announcing her name, sex, gender identity and what she was wearing.

“I am Kamala Harris, my pronouns are she and her, I am a woman sitting at the table wearing a blue suit,” the vice president said at the top of the meeting.

The event was to mark the 32nd anniversary of the enactment of the Americans with Disabilities Act.
…

Self description of her attire was for the benefit of any participants who are visually impaired, but her gender identification led to criticism from Republicans.

“Okay…but what is a woman?” Colorado Representative Lauren Boebert tweeted in response to a clip of the comments. Georgia Representative Andrew Clyde shared the exact same question in his own tweet.

Both lawmakers are referencing new Supreme Court Justice Ketanji Brown Jackson claiming during her confirmation hearings that she could not define “woman” since she is not a biologist. This line has become a frequent right-wing attack against Democrats and the LBGTQ community.

On July 18, The Washington Times reported the following:

Vice President Kamala Harris told the annual NAACP convention Monday that the Supreme Court’s ruling overturning abortion rights is reminiscent of the era of slavery in the U.S. because women no longer have the right to control their bodies.

Speaking to the 113th convention of the civil-rights group in Atlantic City, New Jersey, Ms. Harris said the ruling last month by the conservative-majority high court “took a constitutional right that had been recognized from the people of America, from the women of America.”

“We know, NAACP, that our country has a history of claiming ownership over human bodies,” Ms. Harris said. “And today, extremist so-called leaders are criminalizing doctors and punishing women from making healthcare decisions for themselves.”

She said pro-life elected officials want abortion to be left to the states to decide.

“But at this moment, many of those same so-called leaders are the same ones who are passing laws to restrict the ability of people to vote,” she said in a reference to mostly southern states.

On March 10, the New York Post reported the following:

Vice President Kamala Harris was slammed Thursday for breaking into inappropriate laughter after she was asked whether the US will take in Ukrainian refugees — leading Ukraine President Volodymyr Zelensky’s former press secretary to say it would be a “tragedy” if she ever became president.

The awkward moment took place during a joint press conference with Harris and Polish President Andrzej Duda in Warsaw.

The two leaders had been asked about the US accepting Ukrainian refugees or otherwise easing pressure on Poland’s strained humanitarian resources. When the reporter stopped speaking, Harris and Duda looked at each other as if each expected the other to respond first.

“OK,” Harris finally said, drawing a chuckle from Duda and the assembled reporters.

“A friend in need is a friend indeed,” the veep added before laughing loudly at her own line. After the merriment died down, Duda confirmed that he had asked Harris to help speed up the consular process so Ukrainian refugees with family in the US could stay with them.

Critics lined up to hammer the vice president on Twitter, saying the topic was “no laughing matter.”

“It would be a tragedy if this woman won the presidency,” Iuliia Mendel, a former Zelensky spokesperson, said in a quote tweet responding to a video of the interaction. She later deleted the post after backlash.

Not included in this list are blunders that could be blamed on speechwriters and event planners like the misspelling of Louisiana or Harris’s “word salads.” Of course if she was a Republican, the liberal press would’ve made fun of those too. For the record there has been no evening newscast coverage of the Louisiana misspell or the speech fumbles.