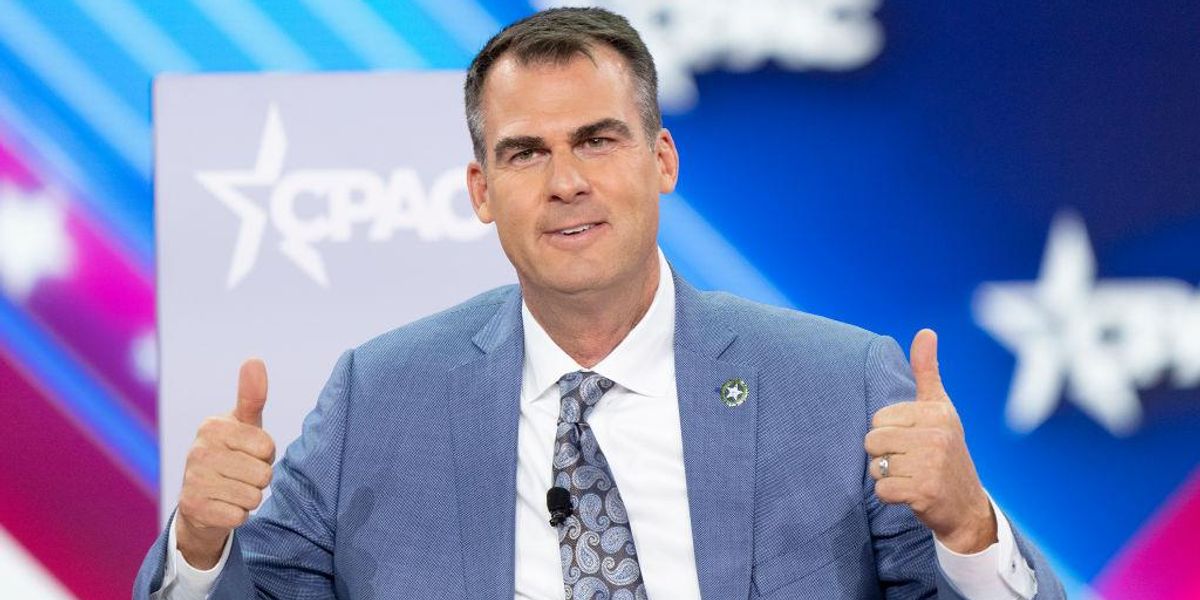 If Democrats are akin to voracious wolves seeking to turn the American sheep into a carcass, the Republicans are the vultures seeking to cash in by feasting on that carcass rather than calling in the lions to battle the wolves and protect the American sheep. Nowhere is this more evident than with Oklahoma Governor Kevin Stitt signing on to the green energy “Agenda 2030” plan to replace cars with electric vehicles in supposedly conservative Oklahoma. Except, unlike most other Republicans, he should get points for honesty, providing us with a full understanding of why Republicans will never fight for us on an issue that matters. The reason? The money and “investments” are always on the side of tyranny.

It should now be abundantly obvious to any thinking person that the weather tyranny and green energy agenda aren’t just cute or even annoying; they will quite literally kill millions of people with starvation and lack of access to vital goods and services. They are coming for our food and fuel the same way they came for ivermectin and hydroxychloroquine during the pandemic. Thus, any promotion of green energy, with its officious regime of government mandates and subsidies, will necessarily ease the death of energy that actually works. So we are all on the same page as conservatives that green energy must be shunned, right?

Wrong! When Jennifer Granholm, Biden’s energy secretary, said recently that “California is in the lead” on energy and “can show the rest of the nation how it is done,” she could have said the same thing about Oklahoma. During a confab of the Western Governors Association in Oklahoma City, Governor Stitt bragged about installing carbon-neutral green energy into the Oklahoma electricity grid and how “the number of charging stations spread out along highways can serve thousands of electric vehicles and a plan to create a new hydrogen energy hub will help the nation move away from fossil fuels,” according to the Oklahoman.

In an interview with the prominent local paper after the event, Stitt let the cat out of the bag as to why he is all in on green energy, revealing the likely culprit for why Republicans betray us on almost every other important issue. “Most Republican governors would not tackle that, but as a business person … you’re looking at where the investments are heading,” said Stitt.

Points for honesty! And Stitt is not wrong. All the money is indeed with the bad guys. The money is with the Great Reset, open borders, pro-criminal policies, corporate welfare, biomedical tyranny, and green energy. Thus, if you ever wondered why Republicans refuse to hold Democrats accountable – even when their policies are so destructive and unpopular – follow the money. Or as Stitt would say, the “investments.”

At a time when we are confronted with an intractable fight for our way of life and need an opposing party to break the paradigm of the federal government working with the ESG “sustainable growth” and “Agenda 2030,” governors like Stitt believe in the old adage “if you can’t beat ’em, join ’em.” Yet the only reason we can’t beat them is because Stitt and other GOP governors have already decided to join the bad guys.

The Oklahoman explains Stitt’s feelings based on their interview as follows:

For Stitt, the growing electric car market is one he wants Oklahoma to tap into.

Stitt has pushed for the state to spend billions of dollars in tax incentives for the electric vehicle industry, including nearly $700 million the governor got lawmakers to approve this year in hopes that Pansonic would bring an electric vehicle battery plant.

In other words, the very corporate welfare that has allowed government to artificially promote expensive and ineffective energy policies that now leave us with a crisis of our way of life is fully embraced in Oklahoma, just like in California.

Stitt will defend himself by saying that unlike in California, he still supports oil and gas alongside fake energy. But the problem with this “all of the above approach” is that given that Democrats are artificially imposing blocks on oil and gas and spurs on electric cars, wind power, and solar power, any tendentious treatment of green energy by Stitt will only help grease the skids of the “Net Zero” carbon agenda.

Perhaps if Stitt were in charge of the world, the green energy subsidies wouldn’t be as much of a threat to energy that actually works. But given that he is enabling an illusory replacement of fossil fuels, it will allow the globalists to more easily destroy the fossil fuel industry altogether, while making us reliant on wind and solar, which aren’t reliable, and electric cars, which are not only more expensive, but dependent on so many natural resources that have become scarce and expensive as a result of the Great Reset. The shortage of lithium, cobalt, and magnesium will make electric vehicles impractical, and the relative scarcity of copper and aluminum needed for the wind turbines will also make wind an expensive boondoggle for the little energy it produces. Oh, and let’s not forgot all the oil and gas needed to produce the supply chain of most of these “alternative” energy products.

Stitt brags about Oklahoma getting 35% of its electricity from wind, but the free market did not drive that outcome and never would have. Transitioning to green energy will further ease the left’s plan to destroy fossil fuels and leave us with unreliable energy. Would he celebrate a grid built upon 100% wind power? What will that look like when the air is calm, the sun goes down, but the illusion of the transition allowed the left to wipe fossil fuels off the map?

While Stitt brags about wind energy, he refuses to learn the lesson from south of his border when Texas’ grid failed thanks to that transition to “new technology,” as Stitt fondly refers to solar and wind. Rather than spending the money on energy that actually works, “red” Texas invested $66 billion in solar and wind to each compensate for each other’s failures (solar during dead wind and wind during the night). Texas became the leader of green energy long before California. Yet that did nothing for Texans during the Great Texas Blackout of February 2021, which cost billions of dollars and nearly 200 lives. This past summer, according to Bloomberg, the Texas grid had to operate “at a historic pace, often forcing them to put off maintenance to keep cranking out electricity.” Imagine if a fraction of the $66 billion had been invested in energy that actually energizes the world rather than in sources than need help from other energy to produce a fraction of the output at a higher cost.

Thus, boasting about shifting reliance from fossil fuels or nuclear energy to green energy is akin to making someone more reliant on a bike than a car for transportation. Which is exactly what they want to do. The more they use a carrot-and-stick approach to prop up fake energy, the more they box out real energy in a circuitous cycle of failure, dependency, higher prices, and scarcity of product, which feeds on itself in perpetuity.

To add insult to injury, Stitt wants to follow the California example of weakening the grid with ineffective energy sources and then further straining it buy promoting electric vehicles, which drive up the demand for electricity, thereby ensuring that the only cars on the road in his dystopian vision won’t be able to reliably run, even after paying a fortune for the purchase.

There’s a broader lesson not just in the fact that a prominent Republican governor has embraced the green energy Agenda 2030 but in the reason why he has embraced it. Stitt believes that we must “invest” in the strong players on the block. Well, the strong players on the block are not the forces of freedom that respect life, liberty, property, and the continuity of the human species in the way we understand it. The strong players are those who want us without cars, without detached homes, without abundant food and medicine, and completely reliant upon government for basic needs while eating bugs, groveling for rationed food, energy, and medicine, and having our bodies, minds, and souls constantly surveilled, if not downright controlled. This is where the money is. This is the “wave of the future.”

Kevin Stitt reflects the prevailing sentiment among nearly all GOP senators and governors. It’s not so much that all of them are inherent leftists, but that they support whatever the current corporate class does at the given time. We happen to be living in a time when the corporatists are all propped up by government manipulation and support more radical and destructive ideas than the traditional left-wing organizations of yesteryear. So, do the GOP governors ideologically support transhumanism, the biomedical security state, and “sustainable growth” in energy and food? Perhaps not, but the outcome is the same. Rather than confronting the money and power with equal and opposing force, they will seek to co-opt it, leaving us just as disenfranchised as under Democrat control.

Grandfather charged after forgetting toddler in hot vehicle for 7 hours. Returns to truck 3 times without noticing the 2-year-old
3 Massachusetts police officers are accused of sexually abusing girl in youth program. She later committed suicide while pregnant.
‘She was 12 and I was 30’: Biden baffles with bizarre statement during union speech
RED SHIFT: 162 Scientists who used to work for a top US nuclear research base now work for the CCP
‘The most outrageous intimidation effort in history’: Mark Levin’s electoral deep dive