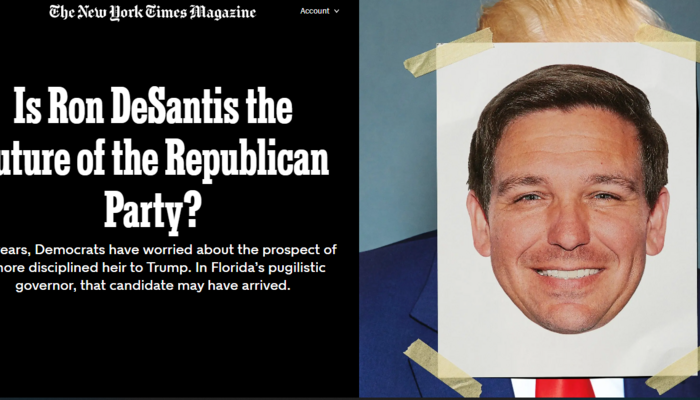 Another day, another Ron DeSantis hit piece in a major newspaper. “Is Ron DeSantis the Future of the Republican Party?” by New York Times reporter Matt Flegenheimer is set to appear in the September 18 Sunday Magazine, posing the question: Will Florida’s governor throw his hat in the ring for president, even if Donald Trump runs as well?

After some preamble, Flegenheimer sets the scene for his long analysis, in which DeSantis comes off perversely well, despite the reporter’s attempt to paint him as a right-wing strongman.

….He has for years merrily shunned the perspectives of moderating influences and gentle dissenters and found himself validated at every turn, his recent history a whir of nominally risky choices — expert-snubbing Covid policies, an uppercut at one of his state’s largest private employers, a long-shot bid for the office he holds — transmogrified to pure political upside as he seeks to position himself as his party’s rightful heir.

Flegenheimer claimed DeSantis “has steered his state to the vanguard of right-wing social causes” and painted DeSantis as a strongman, even though his policy decisions defend both individual rights (against vaccine mandates) and the rule of law (the overturn of Roe v. Wade).

Yet what distinguishes DeSantis, elevating him for now above the Cruzes and Cottons and Mikes Pompeo and Pence, is a central insight into where the party is and where it is headed. If a DeSantis campaign would be a referendum on which parts of Trumpism voters value most — the burn-it-all fury at elites? The perpetual grievances? The blunt-force magnetism of Trump himself? — DeSantis’s read is that the signal trait worth emulating, and then heightening, is more elemental. It is about projecting the political fearlessness to crush adversaries with administrative precision.

Perhaps no current officeholder has been more single-minded about turning the gears of state against specific targets. Trump groused about local Democrats who defied him; DeSantis dug up a 1930s precedent in suspending an elected prosecutor who, amid the overturning of Roe v. Wade and a state crackdown on providing gender-affirming treatment to minors, vowed not to criminalize abortion or transgender care….

Flegenhmer made DeSantis’s fight with Disney, the left’s new favorite corporate behemoth, sound unfair, characterizing it as “executive vengeance-seeking” against Disney’s public stand against the Parental Rights in Education Act, which banned teaching on sexual orientation and gender identity in the early grades.

With his early bet on reopening and his concede-nothing posture, DeSantis has plainly won the political argument on Covid. The economic advantages and day-to-day freedoms of his hands-off approach were undeniable, and state-to-state virus statistics are rarely as clean as his opponents would like….

Yet somehow, the governor of Florida, a state which as of mid-September 2022 sits right at the national average of vaccination, according to the Times’ own figures, is responsible for deaths for being a “vaccine skeptic,” while dismissing the vital issue of children’s education in a five-word sentence.

Some health authorities do offer qualified praise for key DeSantis decisions. Unlike New York, Florida refused to send discharged Covid patients to long-term care facilities. Federal officials pointed approvingly to the state’s walk-up testing sites. Schools reopened with single-minded drive. But many scientists still hold the governor responsible for a large fraction of Florida’s more than 80,000 Covid deaths, especially as he progressed from lockdown-lifter to apparent vaccine skeptic, aligning himself with a segment of the Republican base that jeered even Trump late last year when he told a crowd in Dallas about getting a booster.

Kyrie Irving: I Had to Turn Down $100 Million Extension Because I Was Unvaccinated
Wuhan Institute of Virology vice-director EXPOSED as CCP official overseeing biosafety
Politico Founding Editor Wants to Rewrite Constitution Because of Trump
Backbiting Women: The View Bashes Sinema for McConnell Partnership
Video: NYC man stabbed to death in dispute over not saying ‘thank you’