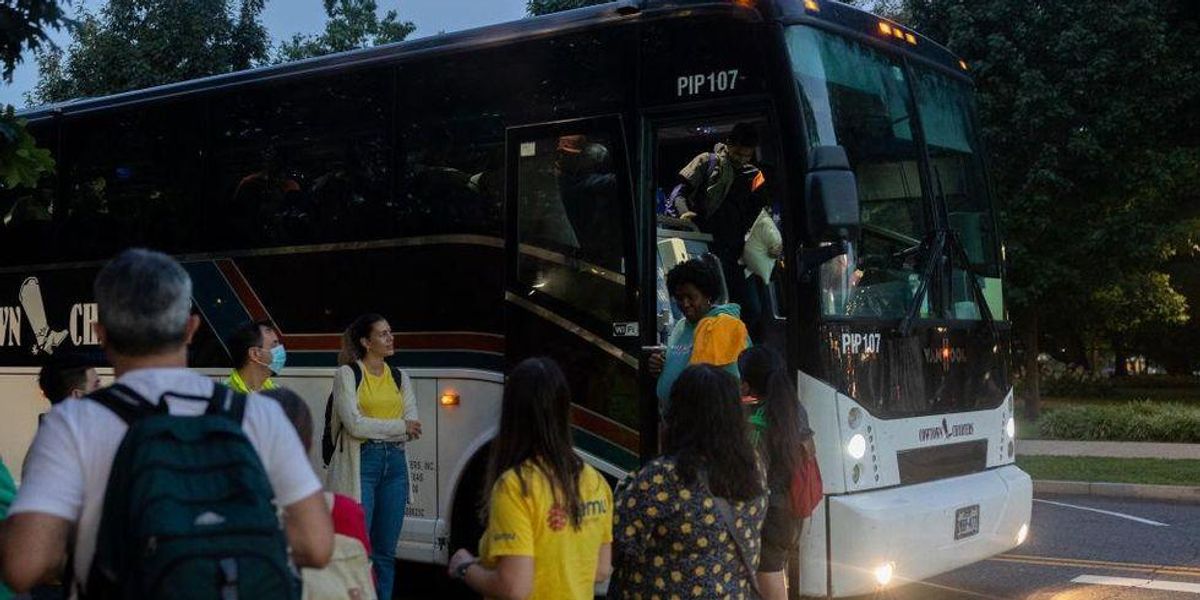 For all the righteous indignation from the left over Florida Gov. Ron DeSantis (R) sending about 50 illegal immigrants to Martha’s Vineyard, Massachusetts, there has been far less outcry over the Democrats’ actions. They have for years sent migrants all over the country to places that lacked the resources to care for them.

DeSantis has now been accused of “kidnapping” and “trafficking” the migrants he sent to the liberal enclave and sanctuary city of Martha’s Vineyard and has even been threatened with criminal prosecution. The White House has claimed GOP governors like DeSantis and Texas Gov. Greg Abbott, who for months has given migrants voluntary passage to New York City and Washington, D.C., are using illegal immigrants as “political pawns” and accused them of cruelty. Mainstream news reports have celebrated Martha’s Vineyard communities donating and volunteering to supply the migrants with food, clothing, and other resources while vilifying the Florida governor for allegedly stoking “outrage’ and “confusion,” suggesting there are cynical motivations to his actions.

What the critics have failed to reckon with is that giving foreign asylum-seekers and other migrants free passage across the United States is not a new policy and it is not unique to Republican governors. For years now, President Joe Biden’s administration has been transporting migrants all across the country because immigration facilities at the southwest border have been overwhelmed by the record high numbers of illegal border crossings.

Both U.S. immigration and Customs Enforcement and the Department of Health and Human Services regularly fly illegal immigrants to different locations in the United States, as the Washington Post has reported. ICE transports adults to different detention centers, while HHS carries unaccompanied children to stay with family members or sponsors already in the country.

NBC News reported in June that the Department of Homeland Security planned to transport migrants awaiting immigration proceedings from U.S. cities along the southern border to Los Angeles, Albuquerque, Houston, Dallas, and other cities. The government used federal funds to send migrants to shelters in these locations, from whence they could depart wherever they wished as they awaited their court hearings. DHS officials reportedly referred to the plan as the “Abbott plan,” making a joking reference to Texas Gov. Greg Abbott’s policy to bus migrants to New York and Washington, D.C.

PBS noted, regarding this program, that DHS was responding to the stress placed on the system by, increasingly, dropping migrants in small, rural communities that had absolutely no resources to help these migrants, and certainly less personal wealth than the residents of Martha’s Vineyard. As the report noted, migrants were frequently dropped off in very small towns without even being told how to find a hotel, a bus station, or any potentially available housing.

Biden was never accused of kidnapping or trafficking these migrants. There was no outrage over this plan from the left. Nor was there backlash in August 2021, when “buses full of migrant families from Laredo and Del Rio” were transported to Dallas, Texas, to alleviate overflowing border towns, as the Dallas Morning News reported. These migrants arrived in Dallas via buses that were chartered by the Democrat mayor of Laredo, who was not accused of engaging in “human trafficking” by outraged liberals.

In March 2021, the Kay Bailey Hutchison Convention Center in Dallas was converted into an emergency intake facility where unaccompanied minors who crossed the border illegally were taken for processing before being sent to live with relatives or sponsors. Abbott raised concerns about the overwhelming volume of migrants crossing the border, but Democrats were not incensed that the government was carrying illegal immigrants to Dallas. Nor was there outrage when federal officials released illegal immigrants at bus stations in Shreveport, Louisiana, without offering any help finding housing or support services.

But these policies are not even unique to the Biden administration. ICE and HHS also transported migrants around the country under President Donald Trump, as well as President Barack Obama.

During the 2014 migrant crisis, Obama’s DHS flew an unknown number of migrants from the Rio Grande Valley in Texas to Arizona, where they were dropped off and told to wait for immigration proceedings. The Obama administration also sent migrants to California, causing a showdown in the small town of Murrieta where protesters demanded the migrants be turned back and deported.

It wasn’t until 2022 that fed up border state governors decided to relieve overrun border communities by giving illegal immigrants free passage to sanctuary city jurisdictions where Democrats claim immigrants are welcome. But even then those Democrat-run cities didn’t want them. Chicago Mayor Lori Lightfoot, for example, quietly relocated migrants bused to her city to nearby suburbs, much to the frustration of local officials who were not given warning. Mayor Lightfoot was not accused of “human trafficking” by outraged liberals.

As for the 50 migrants sent to Martha’s Vineyard, on Friday they were relocated to a military base on Cape Cod, Massachusetts, after Gov. Charlie Baker (R) activated the national guard. Authorities have not said where they will go next or how they will get there.

Here’s the lesson from this week’s outrage: When Republicans send migrants to liberal cities, it’s political theater and inhumane. When the Democrats and the federal government do it to border communities for decades, that’s just the status quo.

Gavin McInnes admits arrest hoax was a prank gone DISASTROUSLY wrong: ‘This was a $10,000 joke’
Wuhan Institute of Virology vice-director EXPOSED as CCP official overseeing biosafety
ANALYSIS: Europe to become “ECONOMIC WASTELAND” as industry dies, banks fail and food production plunges
Gavin Newsom vetoes bill that would have given illegal aliens unemployment benefits in California
Why Are New Vaccines the Only Solution to Illness Elites Talk About?