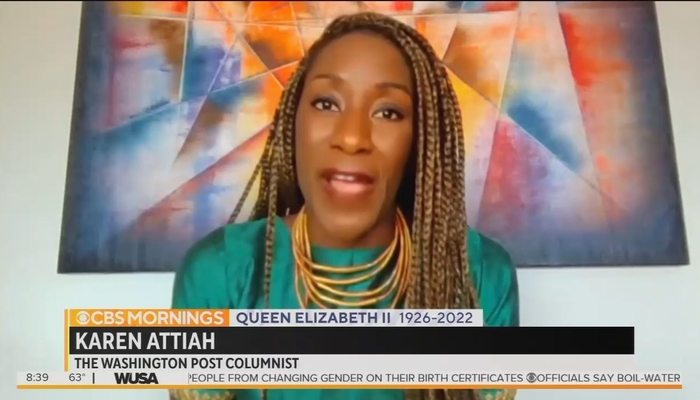 It’s become expected for some on the left to use Queen Elizabeth’s death to lament the injustices of Great Britain’s colonial past or to call for the dissolution of the British monarchy. But the Washington Post’s Karen Attiah decided to approach the problem from a new angle in a piece titled “What Queen Elizabeth meant for White Christianity,” seeing the queen as a symbol for racist white conservative Christians the world over.

While Attiah couldn’t help but note that, for some people, “the queen and her family are symbols of the rapaciousness of the British Empire,” she brought up another dimension of the queen’s life which had special significance for her, because, “As a former evangelical, though, I’ve also been thinking about the religious symbolism of Elizabeth.”

This symbolism is, of course, completely negative, as Attiah gripes:

The religiously devoted queen was “Defender of the Faith” and the Supreme Governor of the Church of England. According to Tablet Magazine, a Vatican official called Elizabeth “the last Christian monarch.” Historically, monarchies like the United Kingdom’s have not just been symbols of empire — they have been symbols of a White, Christian global empire, with the divine right to help spread the kingdom of God to the “darkest” corners of the Earth.

Among the queen’s many sins, “She developed a close relationship with the late fundamentalist pastor Billy Graham, who was known for his revival style of preaching and was one of the most important religious figures of our time. Graham is widely credited with merging White evangelicalism with politics beginning in the 1950s and ’60s.”

Attiah is trying to trick readers into equating Billy Graham’s brand of evangelical Christianity with her “White Christian Nationalist” bogeyman. But Graham was a personal friend of Martin Luther King Jr. and was one of the first white Christian pastors to desegregate his prayer rallies.

She also misinterprets the queen’s lack of input in the day-to-day affairs of the British government as a holdover of a stereotypical 1950s housewife mentality:

Considering the rise of authoritarianism and Christian nationalism, and increasing restrictions on women’s bodies, it’s no surprise that to many far-right American evangelicals, Elizabeth was the perfect woman — a symbol of Christian imperial power who stayed largely quiet on politics and was deferential to men who did the “dirty work” of running the government.

One must wonder if Attiah knows how the British constitutional monarchy works. The British monarchy is a largely symbolic institution with very little real power; its true power lies as a force for unity and stability within British culture, conserving the essential elements even while so much else around it changes. Queen Elizabeth’s role had nothing at all to do with her gender, and she was only able to fulfill that unitary role by staying above much of the fray.

Attiah concludes her op-ed by saying the queen’s legacy continues as, “evangelical, right-wing groups are attempting to install the Kingdom of God in America by influencing school board races, eliminating discussions of racism and LGBTQ issues from schools, and outlawing abortion.”

And Queen Elizabeth was the one leading the charge on these issues? The Queen who signed the 1967 Abortion Act? Give us a break.

If Queen Elizabeth was a culture warrior for anything but the British Commonwealth, she fought that battle quietly, but apparently even the most tepid resistance to the cult of Woke or respect for millennia-old institutions is enough for the media class to label you a white Christian nationalist.