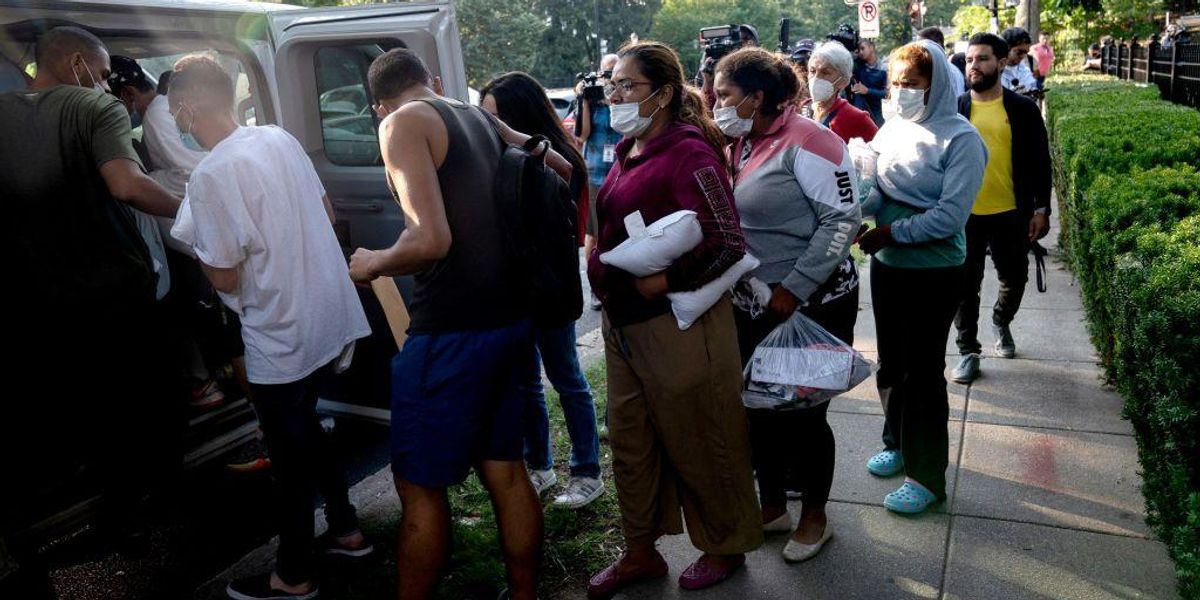 On Saturday morning, another bus carrying illegal immigrants arrived near the Washington, D.C., residence of Vice President Kamala Harris. This is in addition to the two buses of migrants that were dropped off outside the Naval Observatory in the nation’s capital on Thursday.

NBC News reporter Gary Grumbach shared a video of the illegal immigrants arriving near the D.C. home of Harris around 7 a.m. on Saturday. Grumbach wrote on Twitter, “We’re told they’re from Venezuela and Nicaragua. Men, women, children – even newborns.”

u201cMinutes ago, a bus of migrants sent from Texas arrived outside the Naval Observatory in Washington DC. Weu2019re told theyu2019re from Venezuela and Nicaragua. Men, women, children – even newborns. This is the second bus to arrive outside of the VPu2019s residence this week. @NBCNewsu201d

On Thursday morning, two busloads containing more than 100 migrants were sent from Texas to the vice president’s home. Texas Gov. Greg Abbott sent the migrants to Harris because she recently promised that the U.S. southern border is “secure.”

Illegal immigrant encounters at the border exceeded 2 million this fiscal year – the most ever.

Abbott said on Thursday, “The Biden-Harris Administration continues ignoring and denying the historic crisis at our southern border, which has endangered and overwhelmed Texas communities for almost two years.”

He then tore into Harris over the border crisis, “Our supposed Border Czar, Vice President Kamala Harris, has yet to even visit the border to see firsthand the impact of the open border policies she has helped implement, even going so far as to claim the border is ‘secure.’ Texas will continue sending migrants to sanctuary cities like Washington, D.C. until President Biden and Border Czar Harris step up and do their jobs to secure the border.”

Abbott also sent three buses of illegal immigrants to New York City on Saturday morning, according to Fox News. Abbott sent migrants to the Big Apple because it is a self-declared sanctuary city.

New York City Mayor Eric Adams said the relocation of illegal immigrants has caused the city’s social services to near their “breaking point.”

“In the last few months, we have experienced an unprecedented surge of asylum seekers arriving from the southern border,” Adams said on Wednesday. “In this new and unforeseen reality, where we expect thousands more to arrive every week going forward, the city’s system is nearing its breaking point. As a result, the city’s prior practices, which never contemplated the bussing of thousands of people into New York City, must be reassessed.”

Abbott said 10,000 migrants have been transported to sanctuary cities since the spring, adding that the move has provided “much-needed relief to Texas’ overwhelmed border communities.”

Harris told Vice News that the relocation of migrants are “political stunts.”

Harris said of Abbott and DeSantis, “I think it is the height of irresponsibility… frankly, a dereliction of duty, when you are an elected leader, to play those kinds of games with human life.”