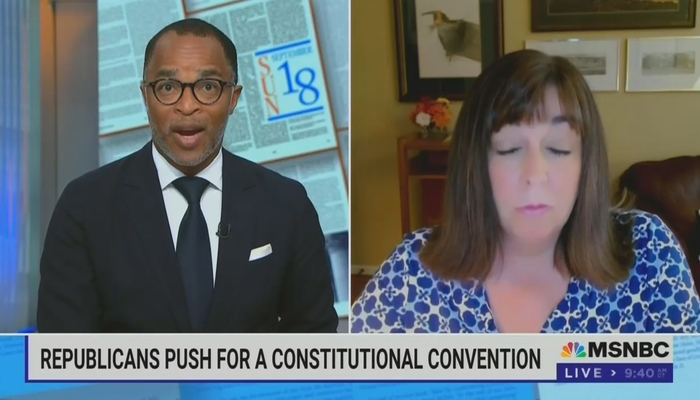 This was liberal paranoia on steroids. On his Sunday Show on MSNBC this week, saying that the prospect of a constitutional convention, something advocated by many conservatives and Republicans, “scared the hell out of me,” and really “blew my mind,” Jonathan Capehart actually expressed this concern:

“The one thing that folks need to understand is any rights that have been granted under the Constitution, even as an amendment, such as granting full U.S. citizenship to the former slaves, would be up for grabs in a constitutional convention!

“And with the way folks [i.e., conservatives] are acting right now, I wouldn’t put it past them during the constitutional convention to go back to calling me three-fifths of a person.”

Capehart might want to read up on his American history. He’d learn that at the time of the original constitutional convention in 1787 [emphasis added]:

“Delegates from the Northern states sought to make representation dependent on the size of a state’s free population. Southern delegates, on the other hand, threatened to abandon the convention if enslaved individuals were not counted. Eventually, the framers agreed on a compromise that called for representation in the House of Representatives to be apportioned on the basis of a state’s free population plus three-fifths of its enslaved population. This agreement came to be known as the three-fifths compromise.”

Got that, Jonathan? The Southern slaveholders wanted all slaves counted as people. It was the Northerners who wanted only free people to count! This was because the Northerners didn’t want the slave states to have a larger representation in Congress by counting their “property.”

Capehart’s guest was Karen Hobert Flynn, president of Common Cause, which fraudulently bills itself as a nonpartisan organization. The group is leading the fight against a constitutional convention. “If enough states require their electors to vote for the winner of the popular vote in all 50 states (rather than the state’s own popular vote), we can fix the problems of the Electoral College without needing to amend the Constitution.”

Talk about destroying constitutional rights! This would mean that states would disregard the will of their residents, and instead be bound by a popular vote distorted by the outsized populations of liberal states like California and New York! This is the Democrats’ cherished dream, and there is supposedly “nonpartisan” Common Cause, pushing it!

On his Sunday Show on MSNBC, Jonathan Capehart fretting that a second constitutional convention could result in him being reclassified as three-fifths of a person was sponsored by Subway, Salonpas, Safelite, Walgreens, and Amazon.

JOE BIDEN: MAGA Republicans do not respect the Constitution. They do not believe in the rule of law. They do not recognize the will of the people.

JONATHAN CAPEHART: Not only do MAGA Republicans not respect the Constitution but, for years, some mainstream Republicans have been pushing to change it with a second constitutional convention. As written in Article V, only 34 states need to support a call for a convention. So far, at least 19 states have officially signed on.

But a constitutional convention is a threat to democracy that is closer to reality than you think. Joining me now is president of Common Cause and the Common Cause Education Fund, Karen Hobert Flynn. Karen, it is great to see you again. Thank you for coming to the Sunday Show.

You were the first one to bring this to my attention about four years ago! Today—and you scared the hell out of me, today, former Democratic Senator Russ Feingold has a forthcoming book about the dangers of a constitutional convention. What’s the key danger?

KAREN HOBERT FLYNN: The key danger is that, first, it could put all of our constitutional rights up for grabs. The right is doing this under the radar, and we need to be pay attention, because the risks are profound.

CAPEHART: When you and I talked about this before, the thing that blew my mind was, while there are rules that you have to follow to call the convention, once the convention is called, and, folks have been saying for years, we need to have a constitutional convention to add in a balanced budget amendment.

So, you could use that as the reason for calling the convention. But once the convention is called, as you said, all of our rights are then on the table!
. . .

The one thing, Karen, that folks need to understand is, any rights that have been granted under the Constitution, even as an amendment, such as granting full U.S. citizenship to the former slaves, would be up for grabs in a constitutional convention!

CAPEHART: And with the way folks are acting right now, I wouldn’t put it past them during the constitutional convention to go back to calling me three-fifths of a person.