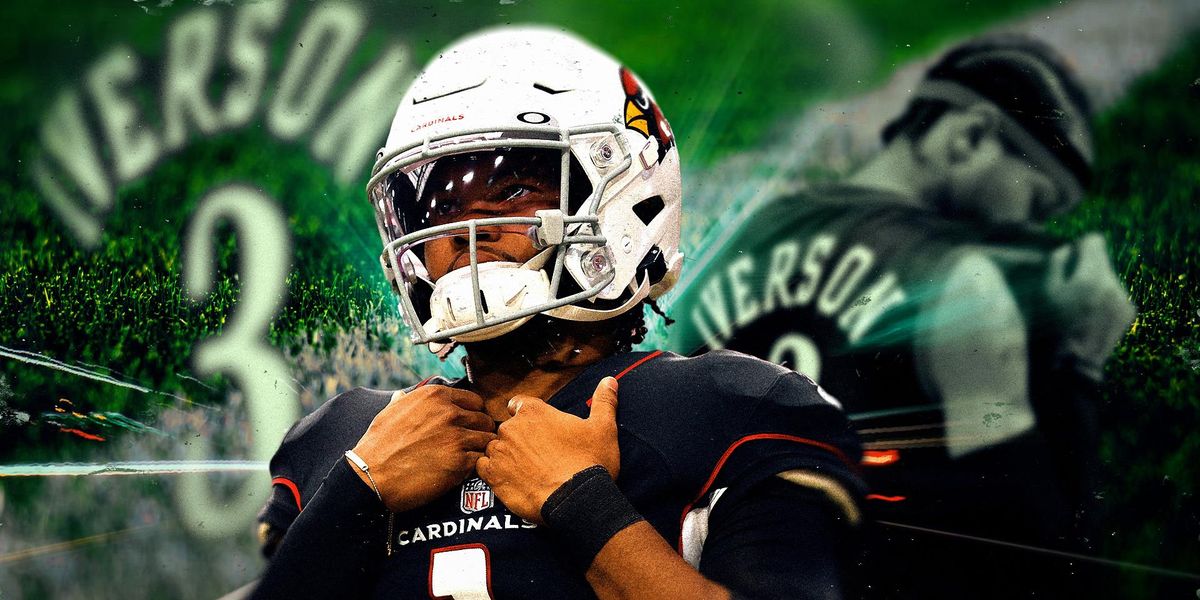 Right now, Kyler Murray is football’s Allen Iverson. You might read that analogy as high praise. It’s not.

It’s recognition of Murray’s dynamic skill, diminutive size, and uncanny ability to answer the problems he creates for the Arizona Cardinals.

A week after an embarrassing performance in the season opener, Murray added two more quarters of uninspiring play to his 2022 resume. At halftime on Sunday, his Cardinals had a real problem. They trailed the Las Vegas Raiders 20-0.

The pint-sized QB with a 2XL contract was a social media laughingstock around 2:30 pm Sunday. Twitter memes blamed Murray’s lackluster performance on a beta test of a new video game. Ninety minutes later, Murray was the toast of the NFL.

He razzled, dazzled, and rallied Arizona to a 29-23 overtime victory. Numbers don’t tell the Murray story. You had to see it to believe it and appreciate it. In a game of giants, the 5-foot-9, 205-pounder made would-be tacklers look like level-one ghosts chasing an elite Pac-Man video game player.

The two-point conversion run Murray converted early in the fourth quarter couldn’t be pulled off in a game of “Madden.” Later in the fourth, on a play that will be forgotten, Murray escaped a sack, danced around in the backfield, and forced a holding call on Las Vegas that converted a fourth and four. Four plays later, Arizona tied the game with a Murray touchdown run and a two-point, seeing-eye laser to receiver A.J. Green.

Kyler Murray is the answer.

You couldn’t take your eyes off Allen Iverson on the basketball court. The undersized point guard captured your attention and imagination. You marveled at his skill and fearless approach. You were so impressed with his ability to dominate men twice his size, you overlooked his propensity to create his own problems. Iverson was an underdog. Who doesn’t love rooting for an underdog?

My problem with Iverson was he could’ve been Isiah Thomas. I’d rather be Isiah Thomas than Allen Iverson. Thomas was the solution, not the answer. Answers are temporary and change depending on the question.

Thomas had a better career than Iverson. Thomas isn’t given the credit his accomplishments deserve. Winning two championships in an era when the NBA was heavily invested in promoting Jordan, Magic, and Bird is one of the most impressive feats in modern team sports.

I enjoy watching Kyler Murray. I don’t envision him winning a Super Bowl. He’s too inconsistent. His decision-making is too erratic. He doesn’t care about preparation. That’s why the Cardinals tried to impose a film-study clause in his contract.

Like Iverson, one day Murray will be captured in an interview mocking the discussion of practice.

“We talking ‘bout practice. Not a game.”

Murray’s career will feature a long list of highlights and Pro Bowl appearances. He might even win MVP one season. Being football’s Allen Iverson will make Murray memorable.

But Iverson isn’t remembered as a winner or champion.

We live in a time when many athletes and fans would prefer Iverson’s legacy over Thomas’. Many people prefer style over substance.

I’m not one of those people. Iverson underachieved. Kyler Murray is headed down the same path.

Think the Pro-Transgender Crowd Is in the Majority? Guess Again
Why Can’t All Republicans Be More Like Ron DeSantis?
Chinese communist-fueled opioid crisis cost U.S. $1.47 trillion in 2020
Asked whether Biden should seek reelection, Pelosi declines to answer, says she will not get into the politics of the issue
NY Times: ‘Failing’ Jewish Schools, But Memorizing Koran ‘the Way to Heaven’