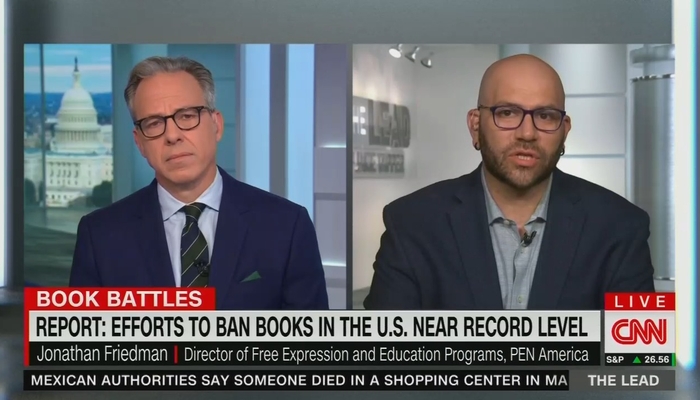 Unsurprisingly, CNN is promoting left-wing “anti-censorship” groups raging against conservative parents who object to precocious pornographic indoctrination. On The Lead with Jake Tapper, the CNN host interviewed Jonathan Friedman, the “director of free expression and education programs” at PEN America, pitched merely as a “nonprofit literary advocacy organization.” They advocate for literature, not for a cultural revolution.

Their latest report boils over at alleged racism and homophobia in parental objections in education. They assert most “book bans” are about “works with LGBTQ+ characters, protagonists of color, about race and racism, or with sexual content.”

At least Tapper began the interview by noting “obviously the devil’s advocate argument might be to a parent out there, hey, I don’t want my first grader reading anything having to do with sexuality, much less LGBTQ or heterosexual or anything.”

Raise an eyebrow at this being the “devil’s” position. Friedman complained that the book removals are too knee-jerk, and “you can’t run schools that way.”

What the Left wants is a system where the “experts” – educators and librarians – select all the books, and the “non-experts” – parents – shut up and accept them.

The Times explained how this book entered libraries across America. In 2020, Gender Queer won an Alex Award, a prize given by the American Library Association (ALA) to books written for adults that hold “special appeal to young adults, ages 12 through 18.” Librarians across the country look to awards like this when ordering new books, so high schools and some middle school libraries around the country began stocking it.

So the ALA promotes the book, and then goes on a “free speech” crusade when it’s challenged. Jonathan Friedman is quoted in the Times alleging “There’s definitely an element of anti LGBTQ+ backlash.” You can’t object without being the bigoted “backlash,” and not a part of “free expression.”

By the way, the 2022 Alex Awards include a book titled Light from Uncommon Stars. The plot?  “The lives of a young transgender runaway, a violin teacher who’s sold her soul to the devil, and a refugee alien starship commander twine together in a story full of music, found family, and donuts.”

Tapper also asked his guest if censorship is just a right-wing thing. But the “expert” librarians get to pick some books and exclude others. Ryan Anderson’s book When Harry Became Sally was removed from sale by Amazon. Does anyone think the ALA rose up and insisted that it had to be included in high-school libraries? Or in that trans-critical category, what about Abigail Shrier’s Irreversible Damage? Would we find these books in schools, or are they nowhere to be found?

The “anti-censorship” groups promoted by the liberal media have the same ideological sensibilities as their friends in the “news” business and the Big Tech sector. They all claim they’re saviors of “democracy,” but they don’t act like it. Their “free expression” credentials are just as easily questioned. They all tend to “censor” the specifics of what makes books objectionable. They aren’t good at debate. They’re good at squelching debate.