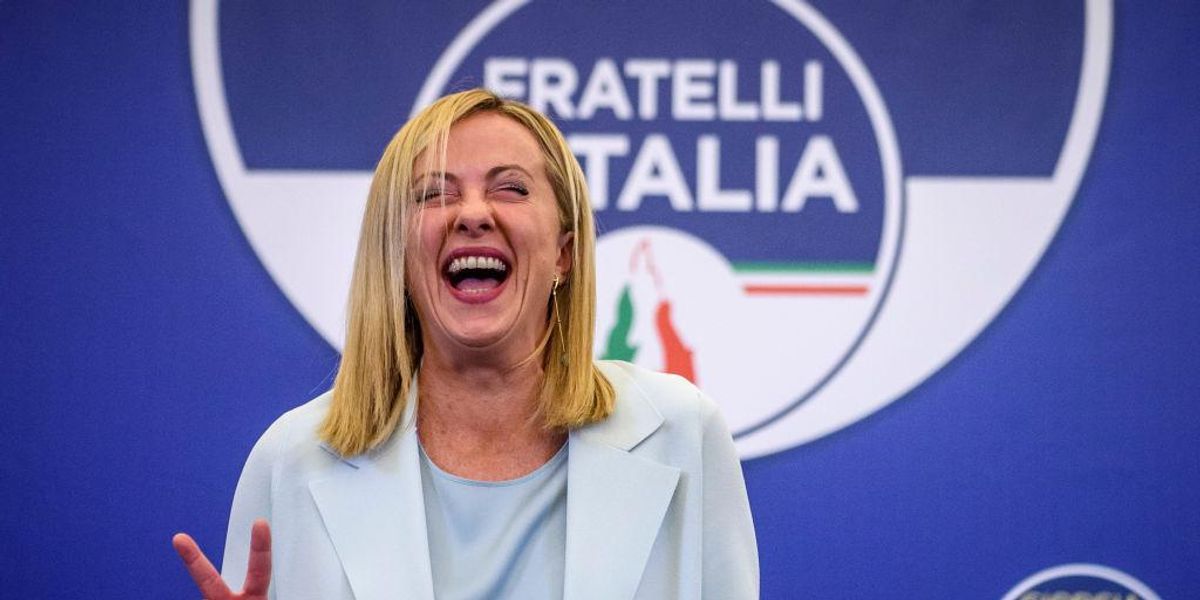 Giorgia Meloni is set to become Italy’s first female prime minister, with early official results confirming exit poll suggestions that her national conservative coalition, known as Centro Destra, has won enough seats to gain a parliamentary majority. The Fratelli d’Italia, which Meloni founded in 2012, won just 4.4% of the vote in the 2018 election. It is now Italy’s largest party, with over 26%. The coalition to which it belongs received over 43% of the vote in Sunday’s election.

Upon learning of her victory, Meloni told supporters that “Italy has chosen us, and we won’t betray her” and that her party will “govern for everyone.”

This victory comes just weeks after the rightist Sweden Democrats made substantial gains in the Nordic country’s national elections with the second-largest share of the vote.

According to Giovanni Capoccia, professor of politics at the University of Oxford, although Meloni’s coalition lacks a supermajority to change Italy’s constitution unilaterally, it does hold a majority in both Italy’s Senate and the Chamber of Deputies.

Rosa Balfour, director of Carnegie Europe, suggested on the BBC that the three keywords best used to describe what Meloni stands for are “ultraconservative values, anti-immigration and nationalism.”

In 2019, Meloni gave a speech to supporters in Rome, declaring: “I’m Giorgia, I’m a woman, I’m a mother, I’m Italian, I’m Christian! You won’t take that away from me!”

Meloni has previously stated she:

Luca Tomini, a political scientist at Free Brussels University, told EuroNews that “what we need to expect is a more Eurosceptic position of the Italian government on several issues. There will be probably a realignment of Italy along with the government of Poland especially.”

The European Union has a fraught relationship with Hungary and Poland, particularly as the eastern European nations have pushed back against Brussels’ LGBT policies and emphasized the priority of their own laws and sovereignty.

Earlier this month, European Commission President Ursula von der Leyen, when asked about the Italian election, claimed, “If things go in a difficult direction — and I’ve spoken about Hungary and Poland — we have the tools,” intimating Brussels could financially penalize EU governments that are regarded as in violation of central policy.

Polish Prime Minister Mateusz Morawiecki responded, calling Leyen’s claims “scandalous,” suggesting, “She said Brussels had the tools to discipline Italy if it created a government that would not be in favor of Brussels. … Is this the Europe we want? … The Eurocrats in Brussels dictate what the government should be?”

At the 2020 National Conservatism conference in Rome, in a speech she dedicated to Pope John Paul II and former President Ronald Reagan, Meloni stated that one of the great challenges “facing us today is defending national identity and the very existence of nation-states as the sole means of safeguarding peoples’ sovereignty and freedom.”

“We did not fight against, and defeat, communism in order to replace it with a new internationalist regime,” said Meloni, “but to permit independent nation-states once again to defend the freedom, identity, and sovereignty of their peoples.”

Although Meloni and her coalition have been characterized as fascistic, she suggests they are guardians of democracy. “Whether the false democrats like it or not,” she said, “national conservatives in every latitude are actually the only real democrats, because it is only defending the nation-state that we defend the political sovereignty that belongs to the citizens of that state.”

As with the implications of the Swedish election, the results of Sunday’s Italian election have not been well received by the European and international left.

Enrico Letta, the leader of Italy’s leftist Democratic Party, described the success enjoyed by Meloni’s alliance as a “sad day for Italy and Europe.” Letta indicated he will now seek continued leadership of the party as of its next congress.

Pietro Castelli Gattinara, associate professor of political communication at Université Libre de Bruxelles, told Vox that the rise of popular rightist movements in Europe is “not that different from what we have been seeing in the U.S. with the radicalization of the Republican Party, what we are seeing in India with President [Narendra] Modi, what we have seen with Jair Bolsonaro in Brazil.”

Gattinara suggested such political gains are, in part, connected to and resultant of a “mainstreaming of far-right ideas, especially with respect to some topics such as ethnic diversity, immigration, and gender issues.”

Meloni as prime minister will, said Gattinara, “be a reboot of the Berlusconi years … but with a much stronger attention to some of the issues that are at the core of our far-right ideologies, I think, in particular, in terms of gender equality, in terms of civil rights, abortion rights, in terms of migration, in terms of religion.”

Some have already taken to social media to urge resistance to the new democratically elected government.

Italian writer Roberto Saviano wrote: “I read #Saviano in trend because the voters of Meloni ‘invite’ me to leave the country. These are warnings. This is Italy that awaits us. They are already drawing up a first black list of enemies of the homeland, in spite of those who said that Fascism is something else.”

Whereas some have claimed that the conservative victory in Italy signals “the elected return of Fascism,” others, including Sara Gonzales, BlazeTV host of “The News and Why It Matters,” have indicated that this is instead part of a trend of “People all over the world … waking up!”

u201cThis is what a red wave in Italy looks like. People all over the world are waking up!nhttps://t.co/FwjxasTj0pu201d

James Cameron — yes, the guy who directed ‘The Terminator’ — now says testosterone is a ‘TOXIN’
Texas girl, 7, who went missing is found dead; FedEx driver arrested for murder, kidnapping
Felon with 8 prior convictions allegedly stabs man to death while out on bond for another charge: ‘These judges need to be held accountable’
Tom Hanks is selling coffee for a good cause
‘Bad ass black trans’ activist fired from own LGBTQ center for allegedly diverting funds to ‘unknown’ bank accounts