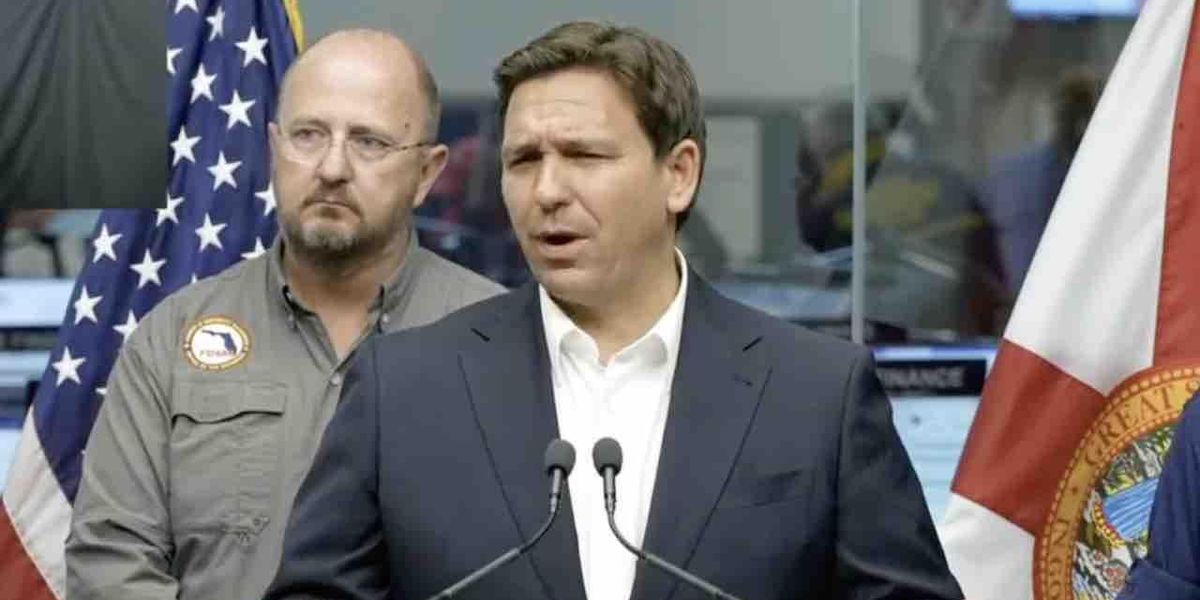 The tongue-lashing from DeSantis came on the heels of the White House earlier in the day dodging questions about why President Joe Biden hadn’t called DeSantis — a Republican running for reelection in November — about the storm, yet calling mayors in the state, the Daily Wire said.

The reporter said, “FEMA Administrator [Deanne] Criswell said today that she acknowledged concerns that … Florida, as was said, lacks response to the storm so far and that —” before DeSantis cut him off.

“Whoa, whoa, whoa! Give me a break! That is nonsense! Stop politicizing, okay? Stop it,” the governor barked. “We declared a state of emergency when this thing wasn’t even formed. We’ve had people in here, you’ve had counties doing … a lot of hard work, and honestly, you’re trying to attack me, I get, but like you’re attacking these other people who’ve worked very hard. And so that’s just totally false. I don’t think we’ve ever, certainly since I’ve been governor, declared a state of emergency this early. We made sure that we were very inclusive with it. We said that there was a lot of uncertainty, and then we’ve worked to make sure the preparations that have been done … you talk to the people at the counties, when they’ve needed something, stuff gets there very quickly …”

u201cThe media can’t help themselves – everything must be politicized. No opportunity to smear opponents is too low. This reporter misrepresented FEMA Director’s wordsnn@RonDeSantisFL won’t accept it. He’ll always stand up for Florida & our world class emergency response professionalsu201d

‘We don’t have time for pettiness’

DeSantis amid his remarks appeared to criticize Biden over the no-phone-call flap, saying that “we don’t have time for pettiness,” the Daily Wire reported.

“So I have not personally spoken with the president, but FEMA has approved our pre-landfall request,” DeSantis noted, the outlet said.

“We feel like we have a good relationship with FEMA,” the governor continued, according to the Daily Wire. “You know, I’m happy to brief the president if he’s interested in hearing what we’re doing in Florida, you know, my view on all this is like you got people’s lives at stake, you got their property at stake, and we don’t have time for pettiness. We got to work together to make sure we’re doing the best job for them.”

“So, my phone — my phone line is open,” DeSantis added, the outlet said. “But we are — we do appreciate the quick approval of the pre-landfall declaration.”

Politicization from the left seems to be the name of the game when it comes to Hurricane Ian:

A Wednesday morning report from the Orlando Sentinel said Hurricane Ian was exhibiting “dangerous winds near Category 5 status” and “has begun to make landfall” and was “expected to barrel its way up toward Orlando tonight.”

The Sentinel, citing the National Hurricane Center, said at 11 a.m. Wednesday the center of Ian was about 45 miles west-northwest of Naples. Gusts of 190 miles per hour are predicted when it makes landfall around 2 p.m., the paper said, citing the NHC.