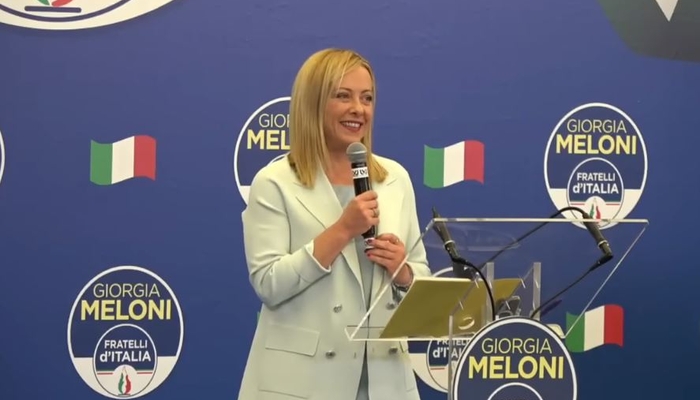 YouTube suspiciously censored a 2019 speech by future Italian Prime Minister Giorgia Meloni just days after she was elected and the clip went viral. Coincidence? Likely not. Meloni made quite the splash this week when clips of a 2019 speech she gave at a World Congress of Families event went viral. “We will defend God, country and family,” she said during the speech, according to subtitles provided by the poster. But YouTube on Tuesday removed the original video that most of the viral clips came from, according to Legal Insurrection.

A YouTube channel called “Cassius” translated videos of European politicians from languages like German, French, Swedish into English. Cassius posted the video of Meloni speaking at the event in April 2019, according to an archived version of the video. YouTube allowed Meloni’s speech to remain on its platform for nearly three and a half years before deciding to censor it after it went viral.

Users attempting to view the video instead find a notice that reads “This video has been removed for violating YouTube’s Community Guidelines.”

It’s unclear exactly why the platform removed the video. The platform’s “hate speech policy” prohibits “content promoting violence or hatred against individuals or groups” based on attributes like “Gender Identity and Expression,” “Sex/Gender” and “Sexual orientation.” Meloni did openly speak out against the LGBT ideology.

“They said it’s scandalous for people to defend the natural family founded on marriage… to say no to gender ideology,” she said. Meloni later added: “I say the embarrassing ones are not us. The embarrassing ones are those who support practices like ‘womb for rent,’ abortion at nine months, and blocking the development of children with drugs at 11 years of age.”

This is not the first time YouTube censored one of Meloni’s speeches. In February, the platform removed two whole days of the American Conservative Union’s live-streamed videos from the 2022 Conservative Political Action Conference (CPAC) in Orlando, including Meloni’s speech. The platform removed the videos nearly a month after they were posted for allegedly violating its “election integrity policy.”

At the time, Meloni tweeted: “Google removed two full days of speeches from the YouTube channel of @CPAC, the largest conference of American conservatives. An unacceptable censorship. Solidarity with the organizers and all those present: this is not the free world we are fighting for!”

YouTube did not provide MRC Free Speech America a comment by publication time.
Conservatives are under attack. Contact your local representative and demand that Big Tech be held to account to mirror the First Amendment while providing transparency, clarity on “hate speech” and equal footing for conservatives. If you have been censored, contact us using CensorTrack’s contact form, and help us hold Big Tech accountable.