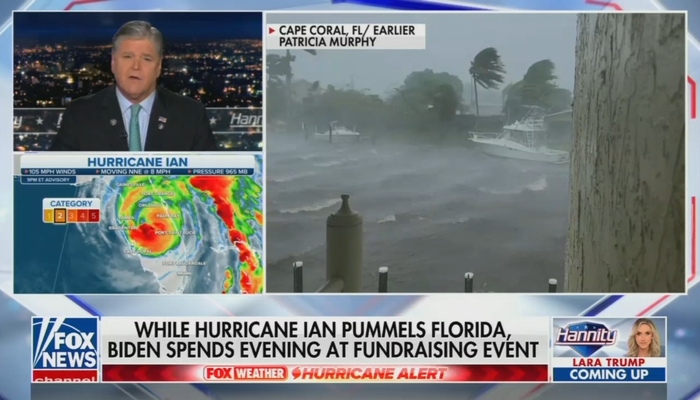 Hurricane Ian has, for good reason, consumed the news cycles this week in light of its record devastation across southwest Florida, but in the midst of their substantial coverage, the broadcast networks of ABC, CBS, and NBC have refused to mention President Biden chose to attend a Democratic Governors Association (DGA) fundraiser on Wednesday night as billions of dollars in damage were being inflicted, lives lost, and storm surge inundated the region.

In contrast, at least five Fox News Channel shows cared to mention Biden’s decision to spend time raising money to put Florida Governor Ron DeSantis (R) out of office as his state faces one of the worst hurricanes to strike the country.

Wednesday’s Special Report was first to bring it up thanks to White House correspondent Jacqui Heinrich:

As this potentially devastating hurricane bears down on the state of Florida, President Biden is attending a political fundraiser to help elect Democratic governors. But, he did reach across the aisle to offer Florida’s Republican governor storm support last night.

Biden’s priorities came up twice in primetime, first with host Sean Hannity noting that, “as millions from Florida are suffering from the devastating impact of Hurricane Ian, the President of the United States, well, he’s enjoying a lavish Democratic fundraiser.”

An hour later, Ingraham Angle host Laura Ingraham lamented that “it does seem off” that, while Biden finally called DeSantis after days of inaction, “he also declined to cancel a fundraiser tonight to help more, you know, obviously Democrats get elected governor.”

Congressman Jim Jordan hit the nail on the head with his response:

[I]f President Trump did that you can imagine what the left would say and you’re exactly right. Leadership matters…[W]hat’s Joe Biden doing? Raising money for himself and for the Democrats[.]

Fast-forward to Thursday’s Faulkner Focus and host Harris Faulkner asked Democratic strategist José Aristimuno why Jean-Pierre insisted that there wouldn’t be any changes to Biden’s schedule on Wednesday.

“At 7:00 eastern last night, let me you what was going on. Well, we all know what was going on. Hurricane Ian was whipping 155 mile-per-hour winds on southwest Florida. Biden went to the Democratic Governors Association in D.C.,” she added.

After Aristimuno insisted “he’s able to do two things at the same time,” Republican strategist Matt Gorman slammed the tone deafness: “If this were Donald Trump or a Republican president going to a fundraiser or not calling a Democratic governor of Florida, the media and Democrats would be howling. It’s really hypocrisy [sic] they didn’t [cancel] it.”

HEGSETH: At the same time, that’s the easiest reschedule I’ve ever seen. You know this type of — you know it’s coming. You see it coming. It’s going to be catastrophic and the visual of what a president does in this moment does count and, certainly, you can think of the flip side, had it been Donald Trump, had it been someone else, the level of hysteria that would have been, you know, palling around with rich folks in Washington while this happens. So, yes, you can do two things — he’s got people capable of that and they’ve said there’s maximum coordination. But someone — someone in the White House should have seen this and said not happening tonight.

FAULKNER: Well, look, when the press secretary was asked about it, Karine Jean-Pierre said there are no changes to his schedule.

MCENANY: [T]he timing of it happening exactly when the hurricane damage is happening and the rhetoric he used. According to notes he said, this is not your father’s Republican Party, Biden spoke to MAGA Republicans, tore them down, many of the people whose homes were destroyed — I know this area well — are MAGA Republicans and he’s tearing them down at a fundraiser —

MCENANY: — as they’re incurring this horrific storm damage. So, if you choose a political event, choose wisely your words and certainly on the heels of a really painful gaffe, like the one that you mentioned.

Instead of taking time to mention this, they covered things like this.

Not surprisingly, this followed suit from September 2012 when, just two days after four Americans were killed in the terror attack on the U.S. Embassy in Libya, then-President Obama jetted to Las Vegas for a reelection rally.

Prior to the rally on September 13, 2012, then-ABC correspondent Jake Tapper footnoted the occasion without criticism on Good Morning America:

Even as he deals with the fallout from the attack in Libya, the President obviously feels that the campaign must go on. So overnight, he hit Las Vegas in battleground state Nevada, though he took a moment to honor the four fallen Americans.

CBS This Morning and correspondent Jan Crawford did the same, mentioning that Obama had just sat for a 60 Minutes interview: “The President was on his way to a fund-raiser in Las Vegas, and he did an interview with Steve Kroft.”

To see the relevant transcripts from September 28 and 29, click here.