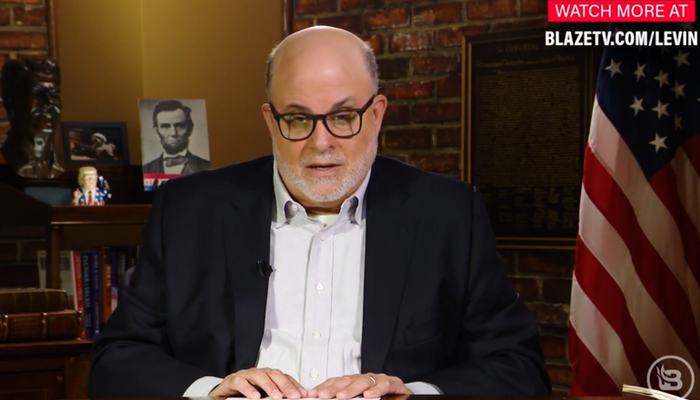 The Great One ripped Biden’s United Nations speech where the president was “lecturing about climate change” while drooling over his supposed green achievements like the $369 billion in climate spending he signed under the misleadingly named “Inflation Reduction Act.” Levin wasted no time mocking Biden for his phony display of eco-expertise in his speech during a recent LevinTV segment: “[Biden’s a] scientist. He’s a climatologist, a meteorologist, a physicist, an astrologist. He’s got all of this in his background and I’m sure he plagiarized his way right through all of it. He doesn’t know anything.” Levin called Biden’s eco-extremist agenda “national suicide.”

Levin played a clip of Biden recounting his climate accolades. “From the day I came to office, we’ve led with a bold climate agenda, we rejoined the Paris Agreement, convened a major climate summits [sic], helped deliver critical agreements on the COP26,” Biden pontificated. Levin had enough, cut the video and skewered Biden for advancing policies that have evaporated America’s energy independence:

Thank you! So, Europe is going to freeze now. Thank you! The energy prices in America are going up. Thank you! And China is getting the upper hand when it comes to energy. Thank you, dummy! We were energy-independent. And we could be providing the world with much-needed oil and gas right now, as well as coal, if it wasn’t for him!

Levin is right on target. The Wall Street Journal reported Sept. 4 that Biden “leased fewer acres for oil-and-gas drilling offshore and on federal land than any other administration in its early stages dating back to the end of World War II.”

The U.S. Energy Information Administration projected in February that the U.S. would become “a net importer of petroleum in 2022.” Oilprice.com defines a net petroleum importer as “a country that imports more crude oil and refined products than the crude and products it exports.” In addition, NPR released a story Sept. 13 headlined: “Soaring electricity bills are the latest inflation flashpoint.”

Bloomberg News also reported Sept. 27 that China invested $32 billion in coal and steel production in the first half of 2022 alone, which dwarfs the entire market value of the U.S. coal mining industry — $18.3 billion — as of July 2021.

Levin tore apart Biden’s pipe dream of limiting the amount of global warming to 1.5°C. “Tell me, mister, what do you mean by 1.5 degrees celsius? What is that? He has no friggin’ idea. No idea whatsoever! What is the exact temperature the globe should be? Nobody knows. Like we can control it,” Levin quipped. “You know what’s up there, ladies and gentleman? You ever look up in the sky and see that big yellow thing? It’s called the sun. The sun determines the climate on earth. Almost nothing else. The sun – it’s very, very, very powerful.”