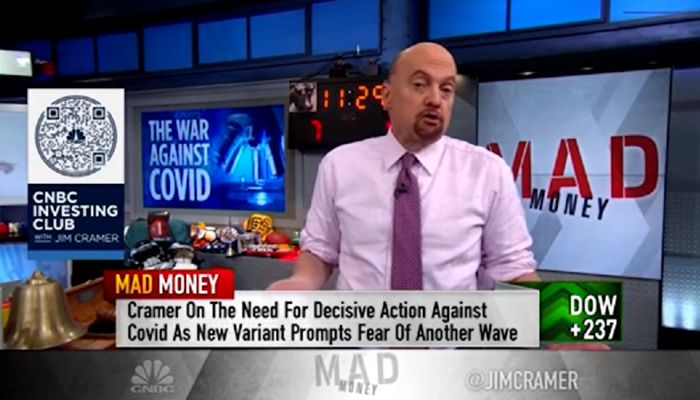 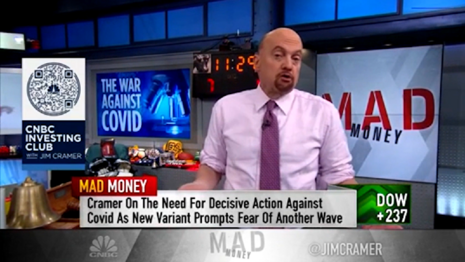 This is a tale of two very different Jim Cramers separated by only a year. In November 2021 Cramer went full authoritarian as chronicled here by Joseph Vazquez in “Did Someone Break CNBC’s Jim Cramer? Host Calls for Military-Run Universal Vax Mandate.”

CNBC host Jim Cramer went on an unhinged rant against unvaccinated Americans and called for the federal government to impose a national COVID-19 vaccine mandate enforced by the U.S. military.

Cramer took precious airtime during Monday’s edition of CNBC’s Mad Money to express his fury at Americans who won’t get the jab: “It’s time to admit that we have to go to war against COVID.” Then came Cramer’s dip into absurdity: “Require vaccination universally. Have the military run it. If you don’t want to get vaccinated, you better be ready to prove your conscientious objector status in court.”

…Cramer chose to kick off his bumbling segment by fearmongering over the omicron COVID-19 variant: “How do we finally put an end to this pandemic? How do we save lives and get business back to normal so everybody can put dinner on the table?” Here was his idea: “Simple. The federal government needs to require vaccines, including booster shots, for everyone in America by, say, Jan. 1.”

WHEW! And from that very Orwellian Jim Cramer we have a no big deal Jim Cramer of almost exactly a year later in which he compares COVID-19 to the measles while talking about the problems of Xi Jinping in China over his zero COVID policy:

It’s just outright confusing. Almost as if that he wants the economy to shrink. And you know he doesn’t. That’s why I told Becky, don’t try to game this thing because it is an irrational strategy. There is no zero Covid. You can’t — no one has immunity to Covid. There is no natural immunity. So if you’re with someone — it’s like people — maybe they aren’t old enough, but the measles, like, one kid would come to class with the measles, and then the next day everybody had the measles. We don’t have anything like that anymore, but that’s — you know, Covid is the measles.

Apparently Cramer suddenly woke up and realized that going full authoritarian on COVID as they have done in China is not a good look, so he has done a full flip-flop away from the mandatory vaccine or else Jim Cramer of a year ago to this year’s “Covid is the measles.”

SCOTUS Did Not Disclose Financial Relationship With ‘Independent’ Expert Hired to Validate Leak Probe
Diversity Day: Journos Lobby for Minority Chief of Staff, Cops Having ‘Comfort’ With Violence
REPORT: A Surprising Number Of Antifa Members Are White Children Of Privilege
Armed thug picks wrong man to rob on Chicago train — a concealed carrier who pulls out his own gun and shoots suspect
Lead actress of ‘Home Improvement’ defends Tim Allen over resurfaced clip showing him lifting kilt on set