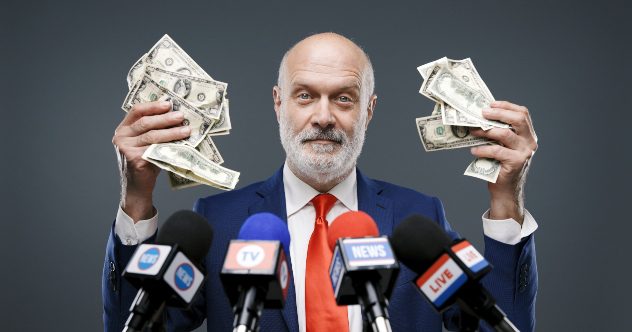 The most common phrase used by regular people and politicians to refer to politics is “it’s a dirty game.” True to this phrase, politics can indeed be a dirty game. Besides the specific skills like leadership, integrity, and speaking well that a political career demands, it’s an unfortunate fact that a politician needs to be crafty and willing to bend (if not break) the law to climb the political ladder.

A politician also needs to be emotionally and psychologically strong because, in most cases, political ambitions and controversy go hand in hand. Fortunately, some have been steadfast, wading through the murky waters of politics, and have something to show for it. Massive wealth.

The one factor that makes political positions desirable is the proximity to power. By being a politician, one has the means to access the rich and the mighty and close multiple deals that help one amass wealth—people whose sole wealth can be attributed to their life in politics. Here are ten politicians that made all their money in politics.

The infamous Robert Mugabe was the president of Zimbabwe from 1980 to 2017. Even though Mugabe came from a relatively low-income family, he was fortunate to receive a quality education and earn a Bachelor of Education in 1953.

Mugabe’s introduction to politics happened in 1960 after he was elected public secretary of the National Democratic Party. He quickly organized military youth groups to spread the message of independence of Southern Rhodesia (now Zimbabwe), a move that propelled him to popularity. In 1963, the British arrested Mugabe for his involvement in the resistance movement. He remained in custody for over a decade until his escape.

After becoming president in 1980, Mugabe started amassing a fortune by overseeing massive corruption and plunder of state corporations and national resources. His corruption instigated the economic collapse of Zimbabwe, which is yet to return to its former glory.

Leaked Wikileaks publications point to massive wealth hidden in huge farms and luxury properties. Before his death, Robert Mugabe was worth at least $1.45 billion.

Saddam Hussein was a writer, party leader, politician, and Iraq’s fifth president. He was formally recognized as the Iraqi president in 1979 despite serving as its de facto leader years before. He served as its leader from 1979 until he died in 2003, when his estimated net worth was $2 billion.

The west widely condemned Hussein for his brutal rule, dismissal of human rights, and suppression of movements that threatened his rule. Before the U.S. invaded Iraq, Iraqi soldiers sent in military trucks withdrew about $1 billion from the Central Bank of Iraq. Later it was discovered that Hussein had been selling Iraq’s fuel to countries like Syria and Turkey through the black market and keeping a share of the profits.

Military forces also discovered hundreds of boxes containing approximately $4 million in cash in several of Hussein’s properties. It was later revealed that this was the money previously siphoned from the Central Bank.

Other investigations also led to the discovery of thousands of wire transfers siphoning money from the Iraqi government to foreign accounts. The money stashed in these accounts was estimated to be $5-$10 billion.

While his reputation as the German Nazi leader who instrumented the Holocaust precedes him, the less-known fact about Adolf Hitler is that he was a billionaire. Having been born into a low-income family living in an Austrian village on its border with Germany, it’s clear that Adolf Hitler accumulated all his riches during his tenure in German politics.

After his career as an artist failed, and consequently, his rejection by the Vienna School of Fine Arts, Hitler volunteered as a German soldier for World War I. After the end of the war, Hitler began his political career by forming the Nazi Party, which quickly gained popularity. He rose to the position of chancellor of Germany after his Nazi party won several elections.

During his tenure, Adolf Hitler was determined to accumulate wealth by all means possible, a factor many attributes to his poor background. Much of his money came from corporate “donations” and government projects. Later he adopted a more creative approach to siphoning money from the government by ordering them to purchase his book to gift state newlyweds. This one move saw him earn millions in royalties.

Hitler was worth 1.1 billion reichsmarks at his peak, about $6.5 billion today.

Ibrahim Babangida, former Nigeria President, is reportedly worth at least $50 billion, most of which was made during his presidency from 1985 to 1993. He’s possibly Nigeria’s richest politician yet. Babangida’s background is primarily in the military, having held various positions like Chief of Army Staff, Lieutenant Colonel, Major General, and General.

Babangida reportedly stole over $14 million during his tenure, most of it from the Gulf War oil windfall in 1992. His fortunes compounded after overseas investments in multi corporations, telecommunication industries, local and international real estate investments, and other avenues.

He also owns several real estate investments in Nigeria; chief among them is his palatial home, a fleet of top-rated vehicles, and other expensive assets.

Ferdinand Marcos, the Philippine president between 1965 and 1986, was a lawyer, politician, and dictator who gained popularity by claiming to be the “most decorated war hero” in Philippine history. During his tenure as president, he pursued several developmental and infrastructural programs funded by foreign debt that, due to mismanagement, led to the loss of lives, extreme poverty, and a crippling debt crisis.

He also oversaw several outright dictatorial policies that led to constitutional revision, media silencing, and violence and oppression against the people of the Philippines in an attempt to silence government critics. During his third term between 1981 and 1985, Marcos’s leadership began its decline partly due to the economic crisis his policies had triggered and the unrest over the assassination of an opposition leader.

Another factor that contributed to Marcos’s decline was the discovery of financial documents detailing Marcos’s hidden fortunes. According to these documents, Marcos and his family had siphoned $6-$10 billion from the Central Bank of the Philippines. His wife, Imelda Marcos, also lived a life of excesses funded by the taxes of the Philippine people.

For decades, the Marcos family held the Guinness World Record for the most significant government theft until recently, when Guinness removed the record from their list. Their children, Ferdinand Marcos Jr. and Imee Marcos, are still active Philippine politicians.

As we’ve established through this article, most politicians who amassed extensive wealth were Presidents of their nations. Another factor contributing to their deep pockets is that most were long-term leaders, having mostly abolished rules that challenged their presidency. This gave them enough time to plant the seeds of their greed and siphon millions of dollars from their fragile economies. And, as you’ll learn, Suharto was no different.

Local and international observers widely considered Suharto a dictator, and he was Indonesia’s president from 1967 until he resigned in 1998.

During his 31 years as president of Indonesia, Suharto’s net worth rose to $55 billion. Opponents of his leadership named his years in government as full of “corruption, nepotism, and collusion.” To paint the picture of just how much Suharto must have plundered during his years in politics, Transparency International named Suharto as the most corrupt president of the last 20 years in 2004.

If there’s one thing that remains true, most politicians who’ve accumulated wealth through state capture and deceit don’t die in biblically shameful ways. Instead, they live long, mostly healthy lives and enjoy their loot well into their sunset years. This is also true for Egypt’s former leader, who died in 2020 at 91.

Hosni Mubarak was born in 1928 in Monufia, Egypt. He had a decorated military career after earning a Bachelor’s Degree in military sciences and later a B.A. in Aviation Sciences. Mubarak’s political career began in 1975 after President Anwar Sadat appointed him vice president. Mubarak later rose to become Egypt’s president after Anwar Sadat died at the hands of jihadists.

Mubarak’s rule was marked by extensive killings, invasion of privacy, corruption, and state capture, leading to several failed assassination attempts. At his political peak, Mubarak was worth at least $40 billion, all accumulated through corrupt dealings during his tenure as president. This figure was revised to $70 billion after an investigative report discovered billions stashed away in foreign accounts and others invested in overseas properties.

Mubarak was ousted as Egypt’s leader in 2011.

If there’s one thing you will learn, if you haven’t already, it is that politics itself doesn’t pay. If political leaders were to serve as intended, they’d give more than they earn. This is also true for Yemen’s political leader Ali Abdullah Saleh who was the president from 1990 to 2012.

Saleh is accused of accumulating a consolidated wealth of $40 to $70 billion. He made most of this wealth in politics, particularly from corrupt dealings and contracts in the country’s oil and gas sectors.

This wealth was transferred to foreign accounts and hidden in overseas assets and properties. Saleh resigned as Yemen’s president in 2012 after a Yemeni Revolution threatened to oust him.

There’s no way to speak about wealthy politicians who made all their political riches without mentioning the slain Libyan leader, Muammar Gaddafi. To have a clearer picture of just how much Gaddafi had amassed over the years, he was twice as rich as Mexican business magnate, philanthropist, and investor Carlos Slim and ten times richer than the late King Abdullah of Saudi Arabia.

Gaddafi was born in Sirte, Libya, to a low-income family. He, however, was a clever student and managed to graduate from the University of Libya in 1963. Afterward, he joined the military academy and graduated in 1965. Gaddafi’s rise to power came in late 1969 after he successfully overthrew the then-Libyan leader King Idris to take control of the country and become its Commander in Chief.

This began his forty-year spell of massive plunder, seizure of the country’s assets, and downright suppression of democratic rule, which, along with earning a terrorist sympathizer title, led to an estimated $200 billion fortune.

At his political peak in the late 2000s, Gaddafi’s estimated worth was about $70 billion. But, after he died in 2011, reports that he could have a fortune of as much as $150 billion stashed in overseas accounts. Cumulatively, Gaddafi’s political riches not only placed him as the richest politician in the world but as the wealthiest man alive by a long shot.

This is another one of the long-term politicians—Russia’s President, whose total wealth experts have been speculating is more than what is currently reported. Before his political debut in early 1990, Putin served as a high-ranking KGB officer for 15 years. He held positions like Lieutenant Colonel and Second Chief Directorate, among others.

On paper, President Vladimir Putin makes a modest salary of $140,000, which is low compared to countries on Russia’s level. But his massive wealth speaks about a man who certainly earns more than that. Among his top-dollar assets are a $1.8 billion mansion along the Black Sea, aircraft, helicopters, and cars. Besides his extensive collection of houses and 700 cars, his helicopter and aircraft collection is estimated at $716 million.

Much of Putin’s wealth is attributed to his high-handed method of dealing with rich Russian politicians with tax evasion cases or other controversial issues. Through blackmail, crafty deals, and takeover of state-owned corporations.

Whatever the case, the truth is that Vladimir Putin amassed his wealth during his time in politics. And if the $200 billion speculation is anything to go by, it makes him not just the richest politician but one of the wealthiest men in the world.