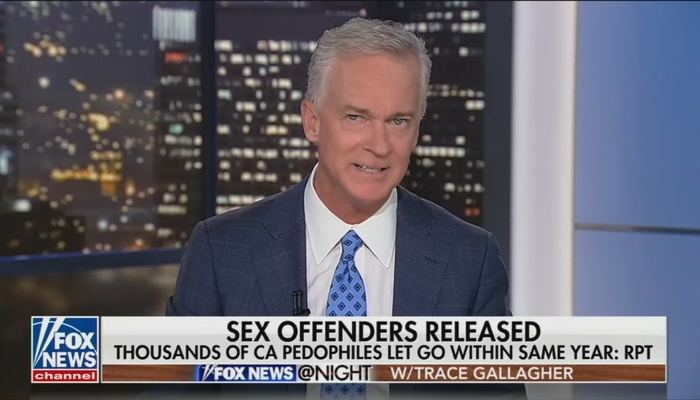 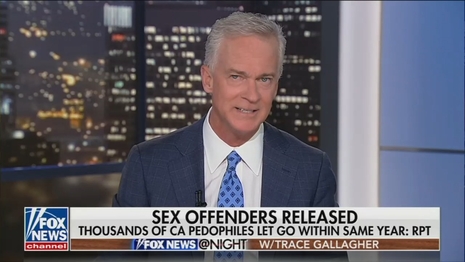 The Daily Mail uncorked a blockbuster investigation Monday into California’s database under Megan’s Law and found that, in a state where Golden State voters have chosen time and again to devalue law and order, “[m]ore than 7,000 sex offenders” that “were convicted of ‘lewd or lascivious acts with a child under 14 years of age’” have been “let out of prison the same year they were incarcerated.”

Of course, because of California’s status as a deep blue utopia led by Governor Gavin Newsom (D), the “big three” networks of ABC, CBS, and NBC and lefty cable networks CNN and MSNBC have completed ignored this sickening development.

Meanwhile, the Fox News Channel has given it repeated attention with segments on at least five shows over Tuesday and Wednesday totaling over 15 and a half minutes on the piece, “‘It’s frightening for society.” Thousands of convicted pedophiles in California are being released from prison in less than a year for horrific acts, including rape, sodomy and sexual abuse of kids under 14, DailyMail.com investigation reveals.”

Reporter Josh Boswell began by noting that “[p]edophiles are getting less than a year prison time after a range of horrific acts, including raping kids under 14,” as per an “[a]nalysis…despite sentencing guidelines”

Within the 7,000 sex offenders released, Boswell explained that includes “365 pedophiles convicted of continuous sexual abuse of a child who spent less than 12 months in prison, 39 cases of sodomy with a child under 16, and three cases of kidnapping a child under 14 ‘with intent to commit lewd or lascivious acts’”.

This startling statistic about sex offenders in the country’s largest state flew in the face of the fact that “[a]ccording” to “the US Justice Department, sex offenders are at least four times more likely than other criminals to be rearrested for a sex crime.”

Worse yet, Boswell’s numbers didn’t go beyond 2019 because, in a convenient turn of events, “the California Department of Justice has added digital blocks on its website to prevent new data being gathered and analyzed.”

As for why it’s happening, Boswell explained it’d stem from Proposition 57 (click “expand”);

One child abuse prosecutor in the Los Angeles District Attorney’s Office told DailyMail.com the situation was ‘a disgrace’.

Deputy District Attorney Jon Hatami added that the problem of short prison time for pedophiles was getting worse, not better. He blamed Proposition 57, a 2016 bill allowing early parole for nonviolent felons which was supported by his boss, LA DA George Gascón.

‘Thousands of child victims are being denied justice and George Gascón and his group of radical prosecutors can care less,’ Hatami said.

‘The CDCR [California Department of Corrections and Rehabilitation] is not even notifying the child victims and their families of these early releases. It’s shameful.

‘Furthermore, most of these sex offenders who are released early have not been rehabilitated whatsoever. This will clearly endanger our future generation of children and our entire community.

‘It’s a disgrace that the state of CA is not prioritizing the safety and well being of our children.’

“Remember, this is the same state where voters and 2014 reduced penalties for property and drug crimes. And when I say reduced, I really mean got rid of…Maybe we don’t have the resources to protect all the CVSs and Target stores in California. But Common Sense would ask: What about our kids,” Gallagher stated.

Boswell made two appearances on Tuesday’s Tucker Carlson Tonight and Wednesday’s Hannity. On the former, Boswell explained the lengths he had to go to chart the release of convicts using the database and two examples of monsters let out (click “expand”):

BOSWELL: So there is a database in the State of California that allows people to look up at sex offenders, people who live near to them maybe. But what you can’t do is look at the database en masse to look at the statistics from it. So I wrote a bit of code to pull down some of that public information, have a look at it, and what we found was, there are over 7,000 pedophiles who have been convicted of lewd and lascivious acts against an under 14-year- old, who spent less than a year in prison or in jail, which was quite shocking and some of the examples really stuck out to me, So we’re looking at someone like Noah Holt, who we highlighted in the story from Santa Cruz County. He was convicted of those lewd and lascivious acts with an under 14, child porn, indecent exposure, and he pled no contest in 2013. He was out with a job in 2014. You’ve got similar examples, Carlos Nehue, continuous sexual abuse of a child he was convicted of in 2015. He spent two days in jail and he now lives one block from a daycare according to the database, which is in California, run by the California Department of Justice. We asked them to give us the data but they refused, and so I had to write this script to put this all together so that I could show the public this information.

CARLSON: So just to be clear, these are not technical sex crimes. This is not a 17-year-old and an 18-year-old getting frisky at the prom and getting arrested. This is child molestation. This is molesting little kids, prepubescent kids.

Boswell added that, upon reaching out to the office of California’s Attorney General, “what they were telling me is…this isn’t their problem. It’s the Courts. It’s the local DAs, but really, this is a problem for the whole State of California, and prosecutors I spoke to said that this could be partly a result of wanting to release prisoners early from prison…to…reduce the prison population.”

Hannity was told something similar as they also reached out to the AG’s office as well as Team Newsom. The latter told them that there’s “a lack of understanding of the role of the state versus the role of local prosecutors and judges.”

And on Wednesday’s Gutfeld!, host Greg Gutfeld stated the obvious that “no normal human being can be okay with this stuff,” but you’re “only hearing about it here on Fox News and nowhere else on legacy media” since their side has one-party rule over the Golden State.

Instead of even giving this a news brief, the networks decided other things were more notable, such as celebrating the 20th anniversary of the movie Love, Actually (on Tuesday’s edition of ABC’s Good Morning America), previewing Rockefeller Center Christmas tree lighting (on Wednesday’s NBC Nightly News), and salivating over the latest act of narcissism from Prince Harry and wife Meghan Markle in the form of a trailer for their Netflix series (on Thursday’s CBS Mornings).

‘Crazed’ man intentionally rams car into mom pushing baby stroller in Walmart parting lot then attacks bystander with a crowbar, police say
Charles Koch Is Jumping Back Into National Politics in a Big Way
College Board admits defeat at the hands of Ron DeSantis, and liberals are outraged: ‘A win for fascist intimidation’
UH-OH: Fox News Is #1, While ‘CNN Just Suffered Its Worst Ratings Week in 9 Years’
MSNBC: Omar Removed For ‘Criticism Of Israel,’ GOP Is Hypocritical