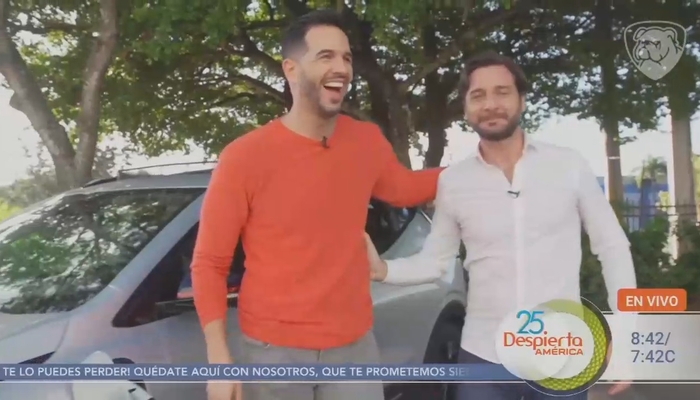 Univision’s relentless promotion of the green agenda via in-show infomercial for the Chevy Bolt spontaneously combusted when Despierta America’s Chef Yisus inadvertently wrote the electric vehicle off as a “chick car” by saying it was “maybe not for me”, but definitely for his wife!

“You sold it to me, brother, you sold it to me. Well, maybe not for me, but for my wife, for sure”, Yisus quipped at Univision’s car guru, Jaime Gabaldoni, after three-and-a-half minutes of hard-sell pitches for the vehicle’s “unique” features.

The failed attempt at pushing the progressive´s green agenda to Univision’s audiences via an “affordable”, $28K e-car, included references about charging the car overnight. However, this particular detail was addressed in a recall memo issued by the National Highway Traffic Safety Administration (NHTSA) for the model year 2017-2022 Chevrolet Bolt vehicles..

“All Chevrolet Bolt electric vehicles are now recalled due to the risk of the high-voltage battery pack catching fire. At this time, GM is asking all Chevrolet Bolt vehicle owners to park their vehicles outside and away from structures, and to not charge the vehicles overnight.”

Of course, Univision´s infomercial had all the markings of an image campaign designed to counter the negative publicity of Chevrolet Bolt´s battery catching fire; an opportunity missed by Chef Yisus’ blooper of ´thanks but no thanks´. We can only hope that the issue- undisclosed by Univision- has been solved for their 2023 model line-up

At MRC Latino we look forward to seeing how the network makes good for Chevrolet´s advertising investment, and for Yesus´heartfelt display of masculine toxicity that figuratively blew the 2023 Chevrolet Bolt EUV into a million pieces.

Press on Expand to view the complete transcript of the segment mentioned above, as aired on Univision´s Despierta America, on Friday, December 2, 2022.

SATCHA PRETTO: We go on to you dear Yisus; you have a surprise for us on wheels. Let’s see, show us.

CHEF YISUS: That’s right, my dear Satcha. Look, we’re here to introduce the 2023 Chevrolet Bolt EUV. This is the most economical electric car on the market available to everyone. And to introduce it to us, let me shake hands with none other than our automotive expert Jaime Gabaldoni. Hey, look. If you are telling me that this is the cheapest thing on the market, let’s start with the price. How much does this car cost?

CHEF YISUS: No, but there are no electric cars at that price. Tell me, well, about their advantages. Let’s start here.

GABALDONI: The charger. This is the charger that the car comes with, ok? First, the car gives you 250 miles. How much do you drive on a daily basis?

CHEF YISUS: So that lasts for the whole week.

GABALDONI: And to charge it with the charger that the car comes with, you don’t have to invest in a charger – a thousand dollars in a charger. Four miles per hour, that means that through the night you can recover your 40 miles.

GABALDONI: Ok, perfect. If we want to go to Orlando, you put it in the navigator – go to Orlando. The system will help you plan the route indicating the location of electric chargers through the… So, there are more than 44,000 stations with which this car can be connected across the country.

GABALDONI: Exactly, the “frunk”. They call it the “frunk”, don’t they? So here’s what you have… have you ever seen an electric motor?

CHEF YISUS: Never. Ah, no, but this seems (unintelligible)

GABALDONI: So, what they have done, in this case we do not have the “frunk”, because all the electrical and electronic components of this car have been moved to the front. You know why? To free up space inside the cabin. So this car probably works pretty well for everyday use. Be careful with your hands.

CHEF YISUS: I mean, then, sure, it’s an SUV and it looks pretty compact, but let me sit inside and see how it goes. Because of course, you see it from the outside, it looks very small, to be an SUV.

GABALDONI: What do you think?

GABALDONI: And that, you’re great.

CHEF YISUS: Enough space…. Here you go…. The back, what do you say? It´s spacious…

CHEF YISUS: I’m interested in knowing if this is economical, because of my wife, but the girls have to fit too.

GABALDONI: Also. Look, back here, too, a lot of space. But what matters most to me, talking about long trips, is that the girls are comfortable, that there is a lot of space here in the back. Normally in this type of truck, in electric cars, they sacrifice a lot of space.

CHEF YISUS: It pays off. It yields…

GABALDONI: Look at the space. And besides, you have a second space here.

GABALDONI: … And the internal combustion cars, the normal ones, have the gas tank here. So they don’t have that much space.

CHEF YISUS: Let me sit back here and see how this is, right? Let’s see how it goes. Enough space. Hey. Look. And just in case… Perfectly brother.

GABALDONI: This car… 200 horsepower, 266 pound-feet of torque. You can drive up to little less than 100 miles per hour and they have limited it, but who drives more than sixty miles per hour?

CHEF YISUS: That’s what I’m telling you, Jaime. There are no electric cars at this price. It’s perfectly fine. What you save on gas is impressive. What you bring there is… It serves in any socket at home?

GABALDONI: Any home socket. The number I have given you. Four miles for every hour of charging, in your home´s socket. Next week we’re going to talk more about the different electric chargers, so that´s coming. We are going to give all the details because electric cars are here to stay.

CHEF YISUS: You sold it to me, brother, you sold it to me. No—maybe not for me, but for my wife, for sure. We go back to the guys there in the studio. Hey. Take note. Chevrolet Bolt EUV

CHEF YISUS: Come on Rauli, I know you liked it buddy.

RAÚL: Spectacular, and above all… If I’m going to save gas, if it’s going to benefit me in every aspect, welcome…