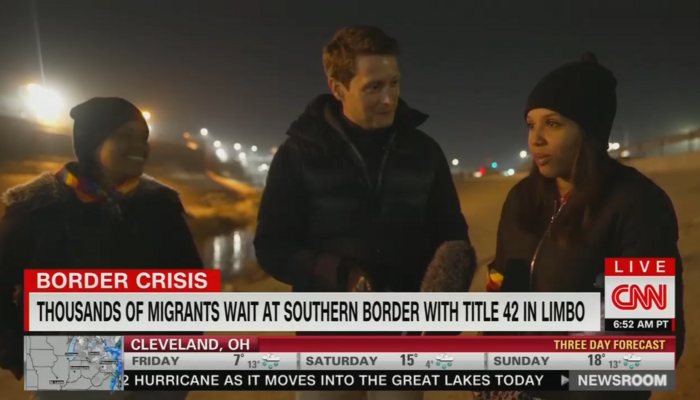 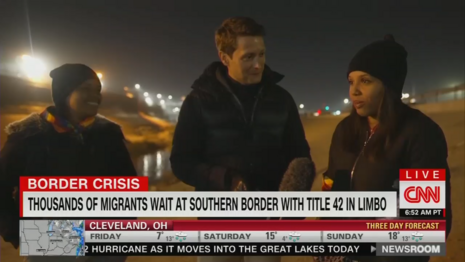 In between obligatory hourly segments about Trump and the weather, CNN hosts spent Friday morning  engaging in outright open-borders activism. The network aired multiple reports emphasizing the plight of illegal aliens, all of which started from the premise that anyone attempting to enter ought to be allowed in.

During the 6 a.m. Eastern hour of CNN This Morning, co-host Don Lemon repeatedly teased a report by correspondent David Culver about the state of the southern border:

“Migrants packing into shelters on the border, waiting for the end of Title 42 and the opportunity to cross into the U.S.”

“CNN correspondent David Culver speaking with to migrants who were stuck at the border after making a dangerous journey. Their incredible story is ahead.”

“Desperate migrants braving dangerously cold temperatures for the chance to cross into the U.S.”

That report by David Culver was essentially a mini-documentary about the plight of would-be illegal aliens. Culver had managed to find a pair of protagonists that checked a dizzying number of diversity boxes: a lesbian couple from Venezuela, one of whom was the mother of a young child.

So close to their final destination, until policy and this halt their journey. Before sunrise Tuesday, we watch as Texas law enforcement mobilize, sealing off this popular access point to American soil, one of the state’s efforts to stop the flow of migrants.”

During the following hour, CNN aired a similar report by national correspondent Camilla Bernal. This one sounded even less like an objective news report than Culver’s piece, if that’s even possible:

They have already spent months trying to get to this country, and all they want is to be here even if it’s freezing.

Neither of these lengthy segments spared even a moment to ask whether the U.S. ought to be allowed to decide whom to let in. Nor did viewers hear hear from any border patrol agents managing the detention centers, which have long since been packed to capacity.

In the eyes of journalists like Culver and Bernal, the American immigration system is a humanitarian aid program, and its purpose is to admit as many people as possible.

Homeless man molested 12-year-old at Georgia park after giving her liquid that made her dizzy, police said
How Hollywood Helped Create, and Destroy, Time’s Up
CNN anchor wastes no time grilling Schiff over claims that got him booted from committee: ‘That turned out not to be true’
BuzzFeed, Internet Dumpster Fire, to Use AI For Article Content
Rhode Island assistant principal asks for donations to help student pay off ‘coyote’ who smuggled him into the US