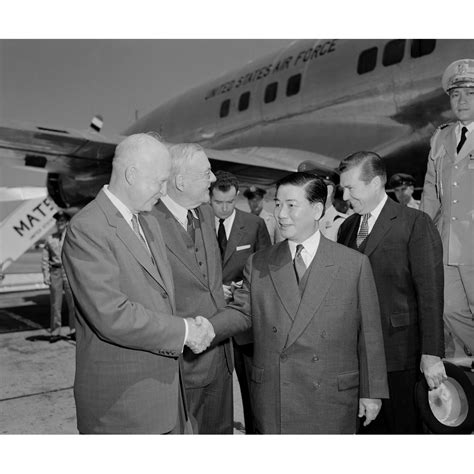 If you think that Volodomyr Zelensky is the first leader in the throes of a civil war (yes, I know, Russia invaded, but the war in Ukraine at its roots is a civil war) to visit Washington, DC and speak to Congress and be compared with Winston Churchill, think again.

I thank my friend, Helmholtz Smith, for noting this historical precedent and finding the relevant video.

While I am sure Zelensky is flattered to be described as a modern day Churchill, he was not the first accorded that honor. Did you know that Ngo Dinh Diem also was the Vietnamese Winston Churchill?

In May 1961, U.S. Vice President Lyndon B. Johnson visited Saigon and enthusiastically declared Diệm the “Winston Churchill of Asia”. Asked why he had made the comment, Johnson replied, “Diệm’s the only boy we got out there.” Johnson assured Diệm of more aid in molding a fighting force that could resist the communists.

Diem learned the hard way that once your U.S. backers anoint you as the next Churchill, your days are numbered. Diem was murdered as a consequence of a U.S. engineered coup.

Zelensky’s Wednesday appearance in Washington, D.C. and the accompanying accolades equating him with Winston Churchill is prima facie evidence that most pundits and news readers in America are certifiable ignoramuses. For starters, Churchill, notwithstanding his love affair with imperialism, was a towering intellect. He authored scholarly books and established himself as one of the greatest rhetoricians of all times. He had a knack for turning a phrase and creating iconic moments.

Zelensky? I challenge anyone to recite one memorable moment from Zelensky’s snooze fest before the U.S. Congress. Banality thy name is Volodomyr. But Zelensky can do something that Churchill never did — he can play the piano with his penis. Gives new meaning to the phrase, “banging out a tune.”

Now, set aside the levity. Remember this week as another watershed moment in U.S. history. At the very moment that Washington embraced a malevolent dictator masquerading as a Nazified version of Fidel Castro, Russia sent an unmistakable message to the United States and Europe — Russia acknowledged that a state of war exists, pitting Russia against NATO and the United States, and it is building up its conventional and nuclear forces in anticipation of a future clash.

The question that continues to nag me, Larry, is most basic. What is the Ukraine-Russia War’s endgame? What do we see as a Ukraine win? Russia’s withdrawal? What does Ukraine see as a win – old borders restored, Russia minds its own business, etc.? What does Russia see as a win – total or partial domination of Ukraine? A western border pushback to NATO’s backyard? Then fortify it (build a f*cking wall)? I don’t see focused discussion of the endgame.  No one seems to be asking or answering the endgame question. It appears we (the US) are dumping $$ billions into Ukraine’s defense without telling the taxpayers what the money is expected to achieve – the endgame.

So what do you think? What is the endgame in Ukraine?