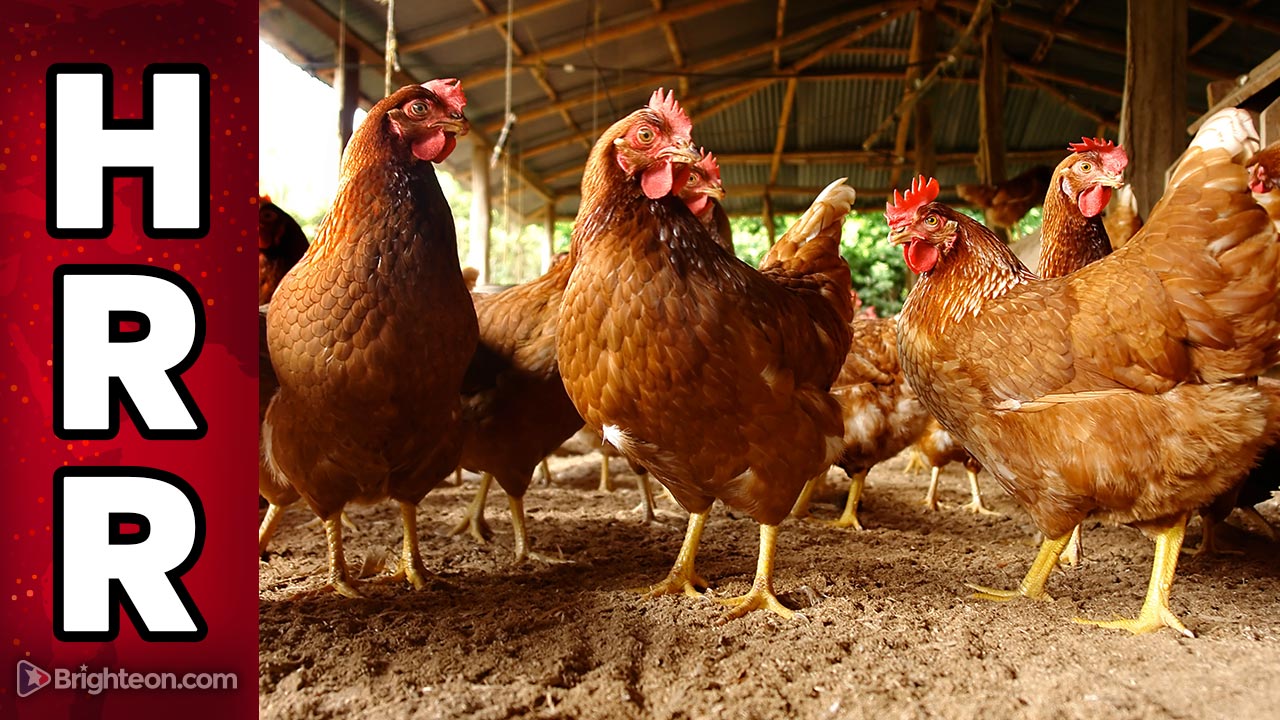 I think it’s all a farce.

It’s a cover story to destroy the food supply and accelerate scarcity in both chicken eggs and chicken meat (as well as turkey meat).

Why do I suspect this? For starters, even the Wall Street Journal admits that a single positive test for an infection results in farmers being ordered to carry out a mass culling of their entire flock. From their story:

Entire poultry flocks are destroyed after an infection is confirmed…

So all it takes is a single infection — often diagnosed via a faulty PCR test that can be cranked up to generate false positives at will — to see millions of birds destroyed.

Astonishingly, those destroyed birds are then counted as victims of the “outbreak.”

Parse the language very carefully from this WSJ article. It says:

More than 40 million egg-laying chickens have died in the current outbreak, according to USDA data…

Stated another way, the reason why so many birds are dead during an outbreak is because farmers are being ordered by health authorities to kill them.

The outbreak isn’t killing these birds, the farmers are doing it under orders from the health authorities! And all those murdered birds are counted as victims of the “outbreak.”

Here’s another shocking tidbit to consider in all this: Commercial chickens are frequently vaccinated against various pathogens. But some of the vaccines make the pathogens even worse. According to left-leaning PBS.org, “In fact, rather than stop fowl from spreading the virus, the vaccine allows the disease to spread faster and longer than it normally would, a new study finds. The scientists now believe that this vaccine has helped this chicken virus become uniquely virulent.”

They’re referring to a vaccine for Marek’s disease. The study being cited is published in PLOS Biology, entitled, “Imperfect Vaccination Can Enhance the Transmission of Highly Virulent Pathogens.”

The study states an obvious truth that rarely gets acknowledged: That vaccines can cause pathogens to spread more aggressively and kill more subjects because they do not prevent transmission or replication. From the study abstract: (emphasis added)

Could some vaccines drive the evolution of more virulent pathogens? Conventional wisdom is that natural selection will remove highly lethal pathogens if host death greatly reduces transmission. Vaccines that keep hosts alive but still allow transmission could thus allow very virulent strains to circulate in a population. Here we show experimentally that immunization of chickens against Marek’s disease virus enhances the fitness of more virulent strains, making it possible for hyperpathogenic strains to transmit. Immunity elicited by direct vaccination or by maternal vaccination prolongs host survival but does not prevent infection, viral replication or transmission, thus extending the infectious periods of strains otherwise too lethal to persist.

What the study is stumbling upon is the simpler answer to all this: Stop vaccinating the chickens and they will live longer as a whole.

Instead of vaccinating chickens against influenza or other strains, then mass murdering them by the tens of millions every time a single case of something is discovered, it would actually be more humane (and cost effective) to allow natural immunity to emerge via the process of natural selection. Chickens that get infected with influenza and die are no longer capable of transmitting it to others. Those that are naturally immune can be used to hatch more baby chick, carrying forward the immunity. Within a very small number of generations, you end up with a chicken population that’s (mostly) immune to influenza, or that can overcome such infections without dying.

Vaccines only cause more culling, including the culling of chickens that are naturally immune to avian influenza. Ask yourself this obvious question: Why would health authorities order farmers to kill birds that are naturally immune to avian influenza? The answer seems self-apparent: They are using the outbreak as a cover story to achieve depopulation of food-producing chickens, worsening food scarcity and food inflation at the same time.

What they do to chickens today, they will do to humans tomorrow

The bigger realization in all this is that what health authorities are doing to chickens today — mass culling because of a single infection — they will do to humans tomorrow.

Hence the rolling out of the new WHO pandemic treaty and covid quarantine camps. In the eyes of the globalists, after all, you and I are just part of the human herd, and we are no different than cattle or sheep to them. Mass culling has always been the go-to tool for population control in animals, and they are using “outbreaks” as the excuse to kill tens of millions of them, including those who are naturally immune and could survive on their own.

A key difference in all this, however, is that in humans, the jabs are the kill shots. Mass culling of chickens is often carried out through mass suffocation. They turn off the ventilation fans and chickens are trapped in their production prisons, being cooked and asphyxiated. Chicken production farms don’t bother running around injecting each chicken with a kill shot.

But in humans, thanks to media propaganda and psychological operations, people can be convinced to line up and beg for the kill shots. How convenient for the globalists. They don’t even have to forcibly round people up or murder them in gas chambers anymore. They merely need to roll out a plandemic, terrorize the population with covid scare stories, and present mRNA jabs as the solution. People line up by the billions to engage in vaccine-assisted suicide. Then the die-offs begin. Right now in the United States, we already have over one million excess deaths since the vaccine push began, and excess mortality numbers from Ed Dowd — author of the new book Cause Unknown (available at BrighteonBooks.com) — reveal that around 2,460 excess deaths of Americans are happening each day.

That’s around 900,000 Americans each year. It’s not as dramatic as the culling of tens of millions of chickens in one year, but then again chickens don’t write their congresspeople and complain. When chickens are slaughtered en masse, few people notice. Ironically, even as 1+ million Americans are dying from the vaccines, few people notice that, either, and some keep telling themselves that deaths are only happening because of a lack of vaccines.

Don’t make the mistake of thinking that as mass deaths accelerate, everyone will wake up and realize what’s happening. Through media propaganda and psychological operations, people can be brainwashed into dismissing mass death even as it’s happening to their own friends and family members. And remember, dead vaccine victims don’t compose tweets, either. The dead can no longer sound the alarm.

My backyard chickens are unvaccinated and free range, and they aren’t dying from avian influenza

I’ve maintained backyard egg layers, by the way, for over a decade. Although chickens die from natural causes and old age — yes, mine end up dying from old age because I don’t kill them — my chickens have never suffered an avian influenza mass death event. And they prance around all day in a free range environment with no fences and no boundaries. They encounter plenty of other birds and water fowl, yet have never suffered any sort of outbreak causing mass death.

So if the narrative we’re told is true — that “wild birds” are infecting chickens with dangerous pathogens, and that’s why we need to kill millions of chickens — then why aren’t my chickens dead from influenza?

The answer is obvious: I don’t vaccinate them, and I don’t keep them confined to artificial indoor buildings. They experience the natural world and eat natural chicken food sources like bugs and small lizards. They drink water from a pond that’s teeming with bacteria, yet they’re fine and healthy. Their immune systems work well, and never once have I thought, “Oh geesh, guess I need to kill them all because one of them might be sick!”

The USDA is a murder factory, and state-based health authorities are brainwashed by Germ Theory pushers who don’t understand much at all about raising healthy animals in the natural world. Sadly, they apply their bad ideas to human pandemics, too, which is why they can only think of one thing to do in every single case: More jabs.

If jabs were the answer, the chickens wouldn’t need to be culled.

If jabs were the answer, vaccinated individuals wouldn’t be getting sick and dying.

If jabs were the answer, then unjabbed people would be dying in droves… but precisely the opposite is happening.

This is why, by the way, we need small family farms and a wholesale decentralization of the food production infrastructure across America. We don’t need Tyson Foods to feed America, we need farmer Bob and Jane to have small, manageable flocks all across the country, providing eggs and meat to local communities. Those flocks don’t need mass vaccinations or mass culling. They need to be raised with respect for natural immunity and the natural world.

That’s how we achieve food security, redundancy and affordability.

Learn more on this topic and much more in today’s Situation Update podcast:

– Wishing everyone a Merry Christmas
– Breaking down the total junk science fraud of the claim that unvaxxed are “bad drivers”
– Almost HALF the people involved in “car accidents” were unvaxxed PEDESTRIANS or passengers!
– Canadian government uses Santa Claus psyop to terrorize children if they aren’t vaccinated
– Egg prices set to explode yet again as mass culling of chickens accelerates
– WSJ admits that a single “positive” influenza test (PCR fraud) results in mass culling
– After millions of chickens are killed, USDA announces “millions dead from outbreak”
– The chickens are all vaccinated, too, so how are they getting sick if vaccines work?
– If “wild birds” are making chickens sick, why aren’t my own chickens dying constantly from sickness?
– It’s all a coordinated attack on the food supply to create scarcity and food #inflation
– Coal is now the top energy source in the world