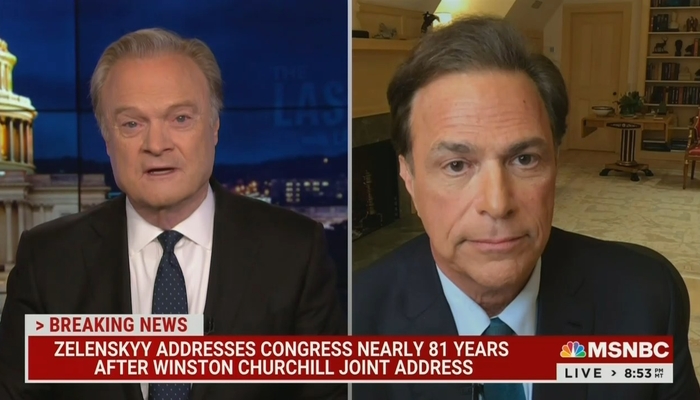 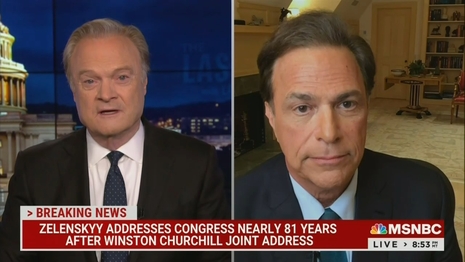 MSNBC used to be the network that demanded that people be allowed to dissent from a government line, certainly when the president was Trump or George W. Bush. But when Ukraine’s president Wlodomyr Zelensky came to speak to Congress, anyone who didn’t treat him as the second coming of Winston Churchill was a foul individual.

On Wednesday night’s The Last Word with Lawrence O’Donnell, the host and NBC “historian”/hysteric Michael Beschloss ripped Republicans for failing to show up or failing to clap.

Beschloss would never demand that Democrats attend a Trump speech, or demand that they give him regular standing ovations.

O`DONNELL: Michael, I rank this speech as one of the most important and certainly bravest speeches that I have ever seen —

O`DONNELL: — delivered in that chamber. Where does it rank for you?

BESCHLOSS: I think it’s very much in that category, because it deals with issues that are about as basic as they get in human life.1941, when Churchill was there the day after Christmas, democracy and dictatorship were at war. We did not know if in the future this would be a war — a world dominated after this war by Nazism and fascism. And many people were defeatist, like Charles Lindbergh and his wife, and said fascism may very well come to our country after the war, if not even sooner. Those are the kinds of discussions that are being held today. [?]

And I think the other thing I’d like to ask is the number of members of Congress, almost all Republicans, did not show up tonight. Or who showed up and refused to clap. I’d like to know why that was for two reasons. Number one, you are a public servant. We’re allowed to know those things. You’re supposed to tell us if you are serving in Congress what the reason was. You know, do you love Putin or are you just opposed to democracy? Or is there something else?

If you made other plans this week before the secret trip of Zelensky, you’re a Putin lover! If you fail to clap, you hate democracy! Doesn’t democracy mean you don’t have to clap?? Then Beschloss turned on Kevin McCarthy:

BESCHLOSS: And then number two, a few of those people, such as [Lauren] Boebert and Matt Gaetz on the Republican side, may be key to the very slim majority that may vote for Kevin McCarthy as speaker. And I’d like to know that McCarthy gets the votes as speaker. Did he make some kind of a secret commitment to them to reduce our aid to Ukraine? I would like to know that before that vote is held next month.

Is this man a historian, or merely a conspiracy theorist? People like Beschloss never cared about the cause of Ukraine during the Cold War, but now since Trump was somehow a Putin lover, the leftists are all waving Ukraine flags until their arms get tired.

This moment of cheerleading for Ukraine’s Churchill was brought to you by Liberty Mutual.

JUST IN: 5 Ex-Memphis Police Officers Charged with Murder in Death of Black Motorist, Tyre Nichols
Gaetz Resolution Blocks Schiff From Access to Classified Info, and You’ll Love Its Name
Bodycam Footage Matches Almaguer’s Reporting – So Why Did NBC Suspend Him?
Who Will Win the Battle Over Committee Assignments?
SCOTUS Did Not Disclose Financial Relationship With ‘Independent’ Expert Hired to Validate Leak Probe