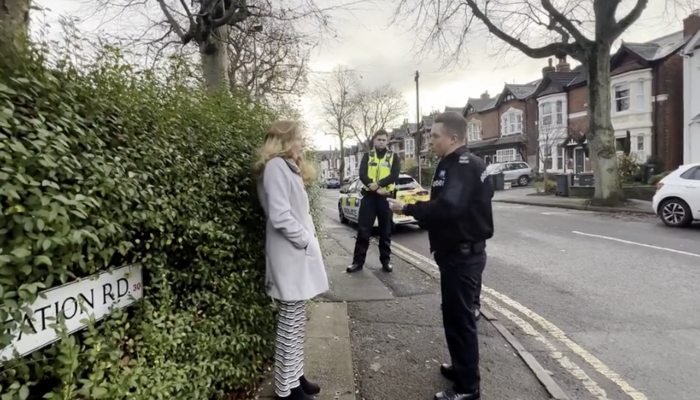 When I saw this video, I thought it was a joke.

An innocent British woman, Isabel Vaughan Spruce, was arrested for praying outside of an abortion clinic. The pro-life woman is the director of the UK March For Life. She wasn’t making a “scene,” yet police arrested her and charged her with breaking the Public Space Protection Order.

Here’s the video if you don’t believe me.

Officers asked, “Are you praying?” to which the woman replied, “I might be praying in my head.”

I’m unsure why that matters honestly. The woman was causing no ruckus whatsoever. She was holding no sign, had on normal, pedestrian clothes, wasn’t chanting any pro-life rhetoric or anything of the sort. Most people wouldn’t have even noticed her presence if they weren’t specifically looking out for her.

Vaughan-Spruce said the following after her arrest:

It’s abhorrently wrong that I was searched, arrested, interrogated by police and charged simply for praying in the privacy of my own mind. Censorship zones purport to ban harassment, which is already illegal.

Nobody should ever be subject to harassment. But what I did was the furthest thing from harmful – I was exercising my freedom of thought, my freedom of religion, inside the privacy of my own mind. Nobody should be criminalized for thinking and for praying, in a public space in the UK.

She’s being represented by the Alliance Defending Freedom UK branch. Legal counsel for the group called Vaughan-Spruce’s arrest “astonishing” and said that a “mature democracy” should be able to discern between “criminal conduct” and what his client was doing, the “peaceful exercise of [her] constitutionally protected rights.”

Sadly, things aren’t that different in the U.S. Pro-Lifers are being targeted by authorities including the FBI. Their homes are being raided. Their children are being traumatized. Their lives are being turned upside down all because they’re pro-life. Yet, pro-abort groups or people who attack pro-life people and centers are walking away unscathed and with zero repercussions.

This isn’t what is to come. This is what’s here. Our world has been flipped on its head and is treating people with utter bias and have a sincere need for a reality check. .

Woke school district promotes upcoming BLM flag-hoisting event
Jay Leno’s show canceled following yet another vehicle-related accident: ‘I didn’t see it until it was too late’
Dr. Simone Gold countersues AFLDS board for suing her over claims that she misrepresented herself as group’s head
Activists are outraged at Arizona bills that would limit and regulate drag shows
Several Ukrainian officials sacked amid escalating crisis in Europe’s most scandalous country