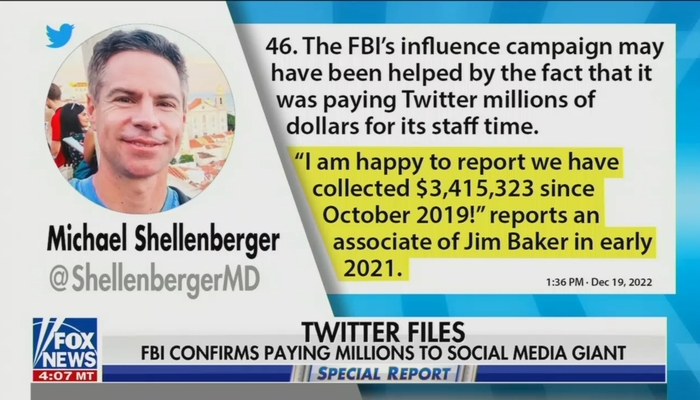 Out comes the news – make that voluminous news – that the FBI has been engaged in a serious partnership with Twitter to censor everything from the October, 2020 Hunter Biden laptop story in The New York Post to the accounts of this or that conservative. And from the liberal media? But of course — zip, zero, nada.

Take a look at this story from Breitbart. The headline:

The story reports this, bold print for emphasis supplied: 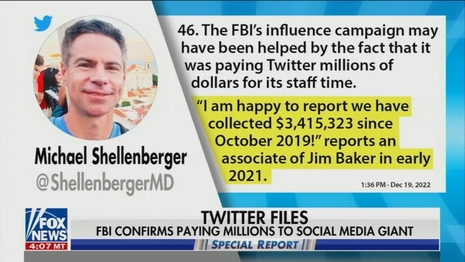 The Washington Post, New York Times, Politico Playbook, Politico Punchbowl News, and the Los Angeles Times all ignored the notable news Monday and into Tuesday that the FBI and intelligence community ‘discredited factual information about Hunter Biden’s foreign business dealings both after and *before* The New York Post revealed the contents of his laptop on October 14, 2020,’ according to journalist Michael Shellenberger.

Mr. Shellenberger is quoted thusly in the story:

Shellenberger revealed that there was ‘an organized effort by representatives of the intelligence community (IC), aimed at senior executives at news and social media companies,’ to smear factual and accurate stories based on a hard drive belonging to Hunter Biden, which the FBI had in its possession almost a year before the Post’s reporting and knew was authentic.

Shellenberger details how agents outside the company worked to get Twitter management, many of whom were former agents themselves, to embrace the narrative that documents showing the Biden family earning tens of million dollars from Eastern European oligarchs and the Chinese Communist Party were part of a “Russian ‘hack and leak’ operation,” and then censor reporting on those documents on that premise. The narrative would then also be adopted by virtually all of legacy media in the lead up to voting day of 2020, and used to buttress their decision not to report on the material.

Shellenberger writes that “during all of 2020, the FBI and other law enforcement agencies repeatedly primed Yoel Roth to dismiss reports of Hunter Biden’s laptop as a Russian ‘hack and leak’ operation,” referring to the Head of Trust and Safety and one of Twitter’s chief censors. Despite the fact that the FBI had the Biden scion’s laptop since December, 2019, and amid Roth allegedly pushing back that ‘Twitter executives *repeatedly* reported very little Russian activity’ on the platform.

As it happens, on Thursday of this week, sitting in as a guest host for Sean Hannity on his radio show, I had the opportunity to interview Mr. Shellenberger. And his tale is in fact riveting. His obvious concern is the role the FBI and the intelligence community played in suppressing the Hunter Biden laptop story. He has tweeted this:

The FBI & the Hunter Biden Laptop

How the FBI & intelligence community discredited factual information about Hunter Biden’s foreign business dealings both after and *before* The New York Post revealed the contents of his laptop on October 14, 2020.”

But he clearly also has concerns, as should all Americans, about the role corporate mainstream media, working hand in hand with the FBI and the intelligence community, plays in suppressing news – say again yes, hard facts – that does not advance their liberal political agenda.

It is amazing to look back in media history and recall the lengths The New York Times and Washington Post went to in order to get the Pentagon Papers published over the objections of the Nixon administration. Nixon didn’t object to this “historic” exposure in the papers because they were about him — they weren’t. The papers dealt with the actions of his Democrat predecessors in going to war in Vietnam. His quite legitimate concern was national security. He lost the case and the Times and Post ran detailed stories about something that was serious hard fact. Uncomfortable fact for some, but fact nonetheless.

In fact, years later, this episode of media history was still celebrated, notably with the legendary Hollywood director Steven Spielberg making a major motion picture of the episode focusing on The Washington Post. Titled simply The Post, it featured Hollywood stars Meryl Streep as Post publisher Katherine Graham and Tom Hanks as executive editor Ben Bradlee. Graham and Bradlee were portrayed as heroes for standing up to just get the facts of a major story out on the table.

But today is a whole different era. The Twitter files story is every bit a major story as the Pentagon Papers were in the day. Yet there are no Grahams and Bradlees here. To the contrary, just as Breitbart has reported and Shellenberger is noting, today’s media – per Breitbart that would be The Washington Post, New York Times, Politico Playbook, Punchbowl News, and the Los Angeles Times - simply ignored Shellenberger’s ace reporting Monday and into Tuesday of this week.

Whatever else this shows, it is a vivid illustration of a hard fact about today’s media. Long gone are the days when it would launch serious journalistic efforts to get to the facts of a major story and publish them. See: Watergate.

In this case, there was Mr. Shellenberger’s reporting on the revamped Musk/free speech Twitter, in Breitbart and on Sean Hannity’s show to name but a few.

The conservative media world – and even the non-ideological Twitter has changed – is here to deal with the suppression of  news and hard facts by liberal media.

And that is all to the good.

MSNBC Uncorks Fever Dreams of MAGA Killing Democracy — As DirecTV Nixes Newsmax
Would Kari Lake Make a Good Running Mate for Trump?
There Oughta be a Law: ND House Votes to Criminalize Drag Shows for Kids
College Board admits defeat at the hands of Ron DeSantis, and liberals are outraged: ‘A win for fascist intimidation’
Hunter Leaves Out Key Reason Why John Paul Mac Isaac Obtained Contents of His Laptop in First Place