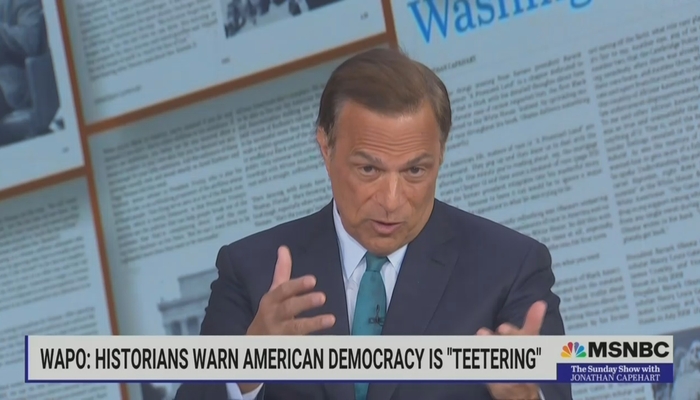 Today we present the WORST OF 2022: The GOP Will End Democracy Award.

“It’s always said, this was the most important election in our history. Well, it’s pretty close to it. And I would say to our friends, who are watching us today: vote as if your life depends on it. Because it might.”
— MSNBC presidential historian Michael Beschlsoss on MSNBC’s The Sunday Show with Jonathan Capehart, August 14.

“The Voting Rights Act of 1965 became law, loaded with provisions ensuring that federal, state, and local elections would, at last, be free, fair, and racially inclusive. In the years to come, the act proved to be a triumph for freedom. Yet in 2022, that historic achievement is being dismantled. Republican-controlled state legislatures are passing laws that impede voter registration….It’s the new Jim Crow.”
— CNN presidential historian Douglas Brinkley on CBS Sunday Morning, January 16.

“There were a couple of missed opportunities [during President Joe Biden’s State of the Union Address] right? Like one, I would have made a one-to-one connection between the authoritarians that we’re fighting in Europe and the authoritarians that we’re fighting in Washington DC.”
— The Nation justice correspondent Elie Mystal on ABC’s The View, March 4.

“The last speech he [Abraham Lincoln] makes before he dies….is talking about extending the right to vote to African Americans who had fought in the war. He then loses his life because that speech was where John Wilkes Booth heard him give that speech and decided now it’s time to kill him. And here we are 150 years later and there are people in the country now trying to get the idea that voting rights should be pulled back, rather than pushed forward….This is the fight we have to be fighting. I think Lincoln would tell them ‘This is your fight right now. Voting rights is central.’”
— Presidential historian Doris Kearns Goodwin on CNN Newsroom, February 20.

“I’m not going to say that, you know, the GOP are Nazis at this point or whatever, but it certainly sounds very familiar to what happened in Germany, which is a bunch of citizens, Adolf Hitler gets a third of the vote, nobody thought it would happen there, they went along because he said he would solve the economy and fix inflation.”
— Former ABC News political analyst Matthew Dowd on MSNBC’s The ReidOut, October 24.