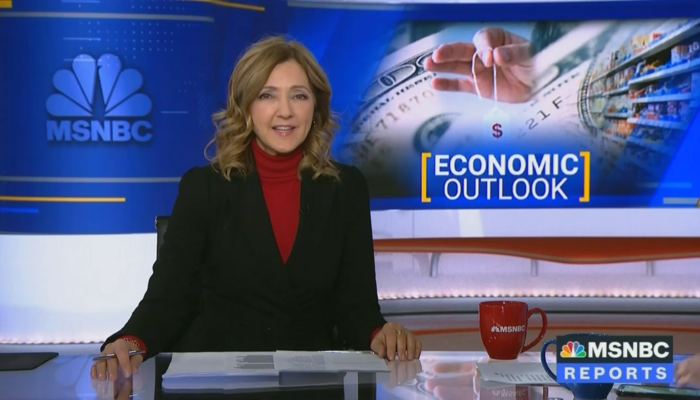 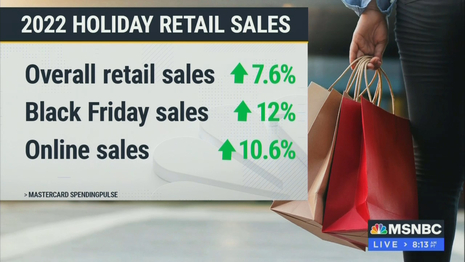 Over at the reliably pro-Biden MSNBC, the tone of a recent report on the retail landscape could best be described as: “At least the economy hasn’t completely collapsed, isn’t that great?”

On Tuesday, MSNBC Reports host Chris Jansing compared some key metrics from the 2021 and 2022 holiday shopping seasons. As she reported, according to a Mastercard SpendingPulse report, “retail sales were up 7.6 percent this holiday — but, of course, there were higher higher prices thanks to inflation.”

So if both spending and inflation were up in 2022, the question was, how well had retailers actually done? Jansing posed that question to NBC News business and data reporter Brian Cheung: “How much of this is, ‘sales are actually up,’ and how much of it is, ‘inflation, so things cost more?’”

Cheung revealed that, based on the available data, the bigger figures in 2022 were largely due to inflation. “When you consider that everything is more expensive this year, and those types of measures are looking at the dollar amount, it’s essentially a wash,” he explained. “It’s not necessarily as good as the numbers look.”

Jansing sprinkled a positive spin on his description: “I mean, is it too far to say, ‘Well, at least consumer confidence hasn’t tanked?’”

Cheung, perhaps aware of what network he was on, kindly agreed with Jansing’s framing, at least initially: “Yeah, no, it certainly hasn’t.” But he continued:

You’re starting to see signs that consumers are getting a little bit more conservative, a little bit more mindful about how they’re spending. And one example is that, if you take a look at how Americans are kind of opening their wallets in the Black Friday peak holiday season, you’re seeing that they’re — they have the same budget as they did last year… But again, because of inflation, that’s gonna stretch across fewer gifts.

Despite Cheung’s explicit reference to inflation as the major contributing factor to decreased consumer confidence, Jansing pivoted instead to interest rates: a factor controlled by the Federal Reserve, rather than by her favorite political party.

We’re not saying he did it consciously, but it’s kind of entertaining that Cheung’s summary obeyed the grade school-era advice of sandwiching a criticism in between two compliments. (Do they still teach that in first grade or was it replaced more with a queer theory-compliant version?)

Jansing was likely aware that the average consumer is getting hit too hard to stomach a report on the economy that paints everything in sunshine and rainbows. So instead, she made a few uncomfortable admissions here and there but couched her report in an overall sentiment of “Hey, things could be worse!”

One can’t help but wonder if that incredibly generous representation of a sputtering economy had anything to do with which party the current President belongs to.