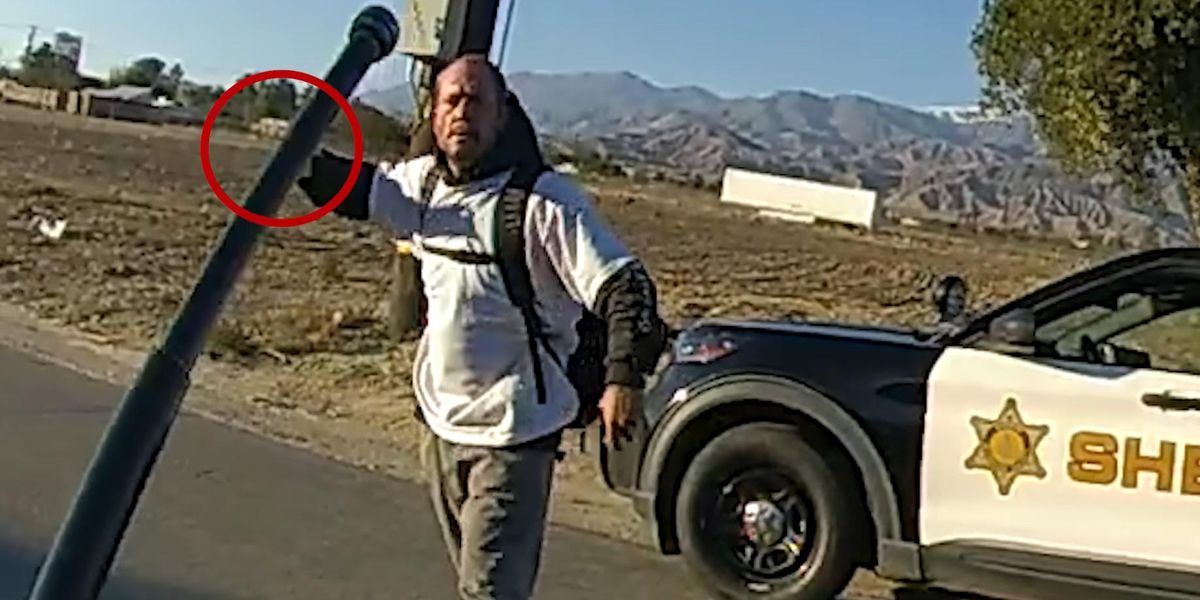 The apocalypse may be delayed indefinitely on account of a California deputy’s quick reflexes, now under investigation.

A man wielding a six-inch meat cleaver and claiming to be the Antichrist moved to attack a deputy from the Cabazon Sheriff’s Station last month during a traffic stop.

According to the RCSD, on Nov. 12 around 3:30 p.m., a deputy from the Cabazon Sheriff’s Station conducted a traffic enforcement stop of a bicycle-mounted suspect on Carmen Avenue west of Rafael Street in Cabazon.

The suspect, identified as 38-year-old Kenneth Scott Wallis, had been riding on the wrong side of the road and was known to the deputy to have an active felony arrest warrant for violating his parole.

The Desert Sun reported that he pleaded guilty to felony domestic assault in 2019 and was sentenced to seven years in prison. He was, however, released on parole in October.

The deputy repeatedly told Wallis to keep his hands out of his pockets, to which the suspect replied, “Shoot me then! Shoot me motherf*****!”

Wallis told the deputy, “Call your f****** office because I’m the Antichrist.”

When the deputy attempted to detain him, Wallis began riding away on his bicycle. The deputy pushed him over, thwarting the evasion attempt.

The suspect resumed his footing. Patting his pockets and squaring off while the deputy extended his baton, Wallis said, “All right, motherf*****, what’s up, G?”

Wallis can be seen in the bodycam footage reaching into his pocket and pulling out a meat cleaver.

Noticing Wallis pull something out of his pocket, the deputy asked, “What do you got?”

Although the deputy administered first aid until paramedics arrived, the suspect was pronounced dead on the scene.

The Riverside County Sheriff’s Office posted a video of the incident to YouTube.

Warning: Graphic video that some may find disturbing.

Oops! Democratic Legislator Calls Abortion ‘Killing Her Fetus’
Tech tycoon, 45, reportedly spends $2 million a year on his extreme anti-aging regimen. His goal? To achieve the body, inside and out, of an 18-year-old.
ADMISSION: Pfizer executive says company is purposely mutating covid through “directed evolution” to keep profit stream flowing; “covid is going to be a cash cow for us”
“Harvey-Level Bad” — Hollywood A-Listers, Moguls In Total Panic Over Tell-All Files
Paul Offit pens letter to NEJM calling for immediate end to COVID “boosters”