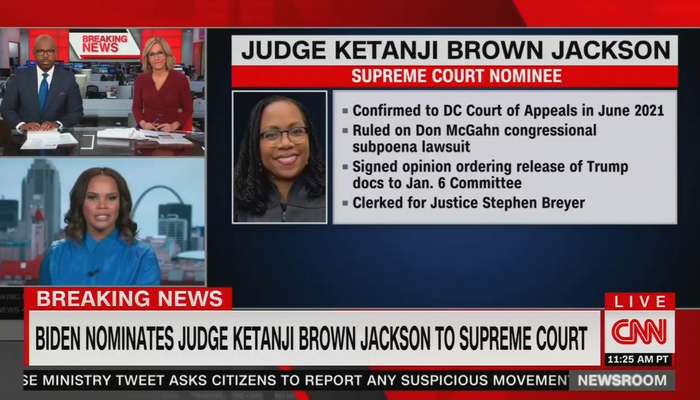 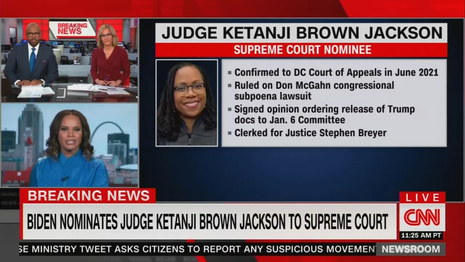 Today we present the WORST OF 2022: The Media Heroes Award.

“Her [Supreme Court nominee Judge Ketanji Brown Jackson] credentials frankly sounded as if Mount Olympus decided to choose and give her each of the credentials and gave this great — almost a legal deity of sorts.”
— CNN senior legal analyst Laura Coates on CNN Newsroom, February 25.

“Mikhail Gorbachev, the communist leader whose brief six-year reign transformed the map of Europe and the world. The first Soviet leader with a larger vision for his country. And who was willing to hold a summit with Ronald Reagan, the American president who called the Soviet Union an evil empire.….Americans were charmed by this new kind young Soviet leader with his ideas of glasnost and perestroika, openness and economic restructuring and his very modern wife Raisa….Mikhail Gorbachev, the man who changed the world but could not save his own country from falling apart.”
— Correspondent Andrea Mitchell on NBC Nightly News, August 30.

Host Walter Isaacson: “Who was smarter, Ronald Reagan or Jimmy Carter?”
PBS humorist Andy Borowitz: “Oh, clearly, Jimmy Carter….One thing I think that’s really important is how much intellectual curiosity you have. And that’s usually reflected in how much you read. And people like Jimmy Carter read a ton. Harry Truman read a ton. Ronald Reagan didn’t open a single book….I think he was very successful in getting his agenda through….That agenda was, unfortunately, was very redolent of his own ignorance. He let the AIDS crisis spiral out of control because he was very unaware of what AIDS was or what it meant. He really created homelessness in this country because he thought that….the homeless just want to live outside.”
— PBS’s Amanpour & Company, September 24.

Correspondent Audie Cornish: “She’s [outgoing House Speaker Nancy Pelosi] already in the National Women’s Hall of Fame at Seneca Falls, so you’re talking about the history book. That’s already written. So, I think this moment really is very powerful….She’s always put her faith at the forefront even when her detractors were kind of saying that’s not something Democrats would do.”…
Host John King: “This is like watching, you know, a great performer on the stage or a great athlete making a big decision about the next chapter….She may be a spunky grandmother but she works hard.”
— CNN’s Inside Politics, November 17.

“Along with thick skin and a wicked sense of humor, these skills helped make Pelosi by far the most consequential Speaker of our time….When she said she prayed for the presidents she supported and those she opposed, including [Donald] Trump, she was serious. Nancy Pelosi is a believer. And her belief has made ours a more perfect union.”
— The Washington Post columnist Eugene Robinson in November 17 article “Nancy Pelosi was the Most Consequential Speaker of Our time.”