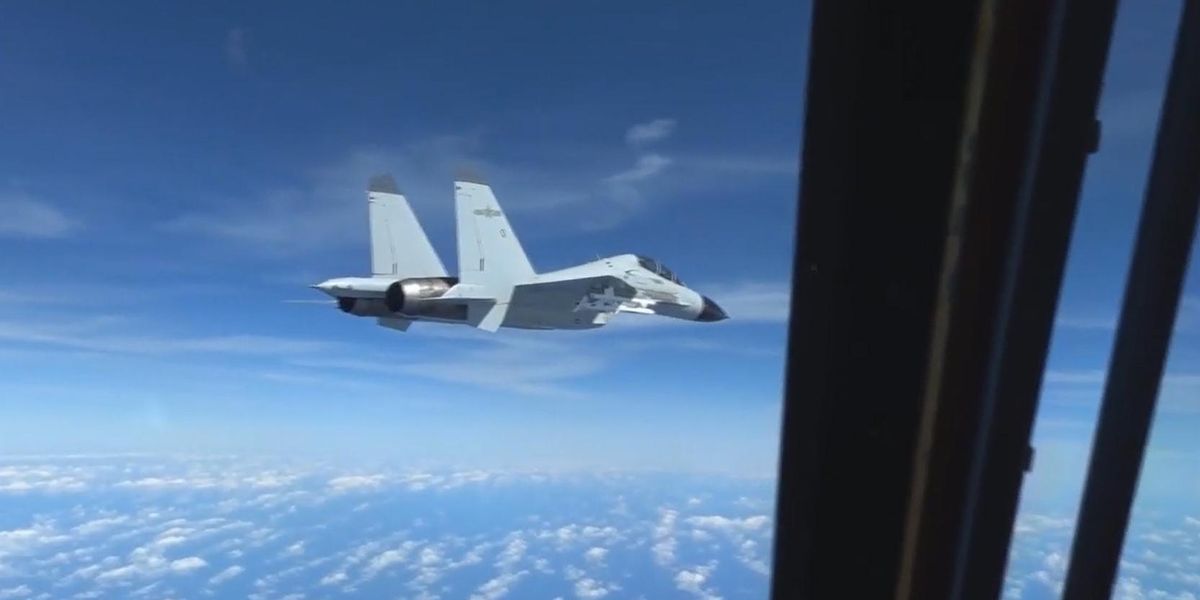 U.S. Indo-Pacific Command issued a release on Thursday noting that a Chinese Navy J-11 fighter pilot came dangerously close to a USAF aircraft on Dec. 21 during an intercept over the South China Sea. The communist jet flew in front of and within 20 feet of the nose of the RC-135.

The interception and subsequent provocation took place while the American plane was conducting legal, routine operations in international airspace.

A similar incident took place between a Chinese fighter jet and an Australian plane in the area this past summer.

A Chinese Shenyang J-16 pulled up to an Australian P-8A Poseidon reconnaissance plane, then released flares and chaff (i.e., tiny pieces strips of aluminum or zinc used as countermeasures). According to Australian Defense Minister Richard Marles, some chaff was sucked into the Australian aircraft’s engines, which could have been debilitating.

Concerning China’s apparent threatening intercept last week, USINDOPACOM noted that U.S. Indo-Pacific Joint Force remains “dedicated to a free and open Indo-Pacific region and will continue to fly, sail and operate at sea and in international airspace with due regard for the safety of all vessels and aircraft under international law.”

While underscoring that the apparent intimidation attempt by the Chinese pilot won’t have any impact on America’s resolve to exercise its international rights and flex air superiority in the region, the regional command noted that it expects all countries in the area to “use international airspace safely and in accordance with international law.”

The dramatic encounter can be seen in this video:

According to Taiwan’s defense ministry, a total of 71 People’s Liberation Army aircraft buzzed the island as part of a “strike drill.”

Chinese dictator Xi Jinping indicated at the Chinese Communist Party’s 20th National Congress that “perilous, stormy seas” were ahead. Xi further claimed that his regime seeks to conquer Taiwan, reserving “the option of taking all measures necessary” against “separatists” and “interference by outside forces.”

It would appear, however, that America and its allies are similarly readying for the storm.

TheBlaze previously reported that on Dec. 16, Japan announced it would be doubling its military spending and acquiring counterstrike weaponry fit for engaging China in a shooting war.

Taiwan is also extending compulsory military service starting in 2024 to ensure that it has sufficient manpower to handle future Chinese aggression.

Admiral John Aquilino, commander of the United States Indo-Pacific Command, told PBS earlier this month that he sees “the current strategic environment as really dangerous — the most dangerous time I have seen in 38 years.”

China’s “inability to operate in accordance with the rule-based order” is a destabilizing force in the region, he suggested.

Notwithstanding China’s growing ambitions and incidents such as that seen on Dec. 21, Aquilino stressed, “The United States Military force in the Pacific is ready for all contingencies.”