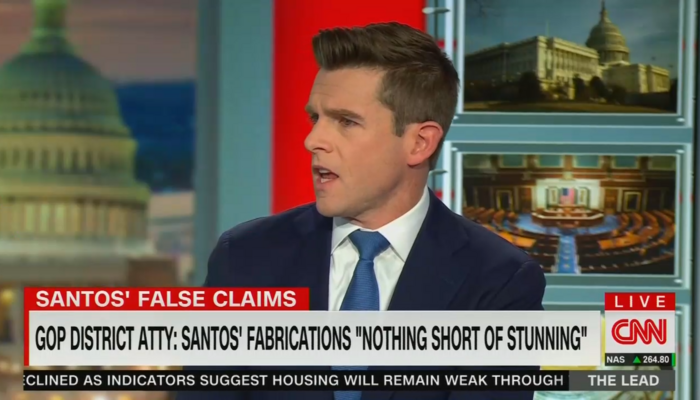 On Thursday’s edition of The Lead, fill-in CNN host Phil Mattingly pointed out the incompetence of the former campaign team for Robert Zimmerman, the New York Democrat who was defeated in the 2022 midterm election by embattled Congressman-elect George Santos. It was recently revealed that an absurd number of autobiographical claims Santos made on the campaign trail were whole-cloth fabrications — yet somehow, as Mattingly noted, the Zimmerman team failed to unearth the truth prior to election day.

During a roundtable discussion about Santos’s numerous lies, Democratic strategist Maria Cardona went a little overboard with the theatrics:

This guy, George Santos, if that even is his name, has perpetrated the biggest case of voter fraud — voter fraud! — in his district… This guy, if he even is a guy, has completely broken that public trust.

Cardona’s absurd allegation of voter fraud prompted a quick rebuke from Mattingly, who felt compelled to point out the colossal failure of Zimmerman’s team to call Santos on his duplicity:

But there’s also a Democratic campaign that ran against him. And I’m not taking a shot at oppo-research, or whatever they had or didn’t have, or whatever.. but, like, come on! You know, honestly! This isn’t voter fraud; he ran, there was a campaign that had every opportunity to bring up all of these issues.

It could be argued that Mattingly was only stating the obvious. But all too often, obvious truths remain unsaid on CNN when they’re inconvenient for the left.