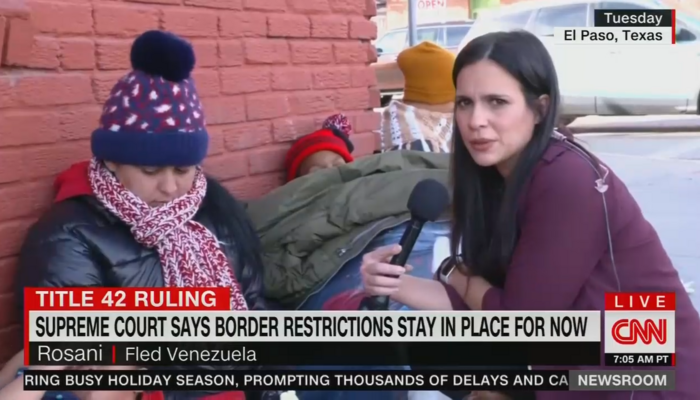 For days, leftwing TV news networks eagerly watched for a pending Supreme Court ruling on Title 42, a Trump-era policy allowing for the timely removal of ineligible asylum seekers due to COVID-19 concerns. When the high court on Tuesday permitted that policy to remain in place, the networks flooded the airwaves with emotionally manipulative propaganda pieces, all of which implicitly advocated for an open-borders approach to any and all migrants who managed to reach America’s southern border.

All of the big leftwing broadcast (ABC, CBS, and NBC) and cable (CNN and MSNBC) networks had reporters stationed at the southern border to await the Supreme Court’s decision. When that decision was handed down, the reporters hurried to shove disappointed-looking migrants in front of the cameras, as if to say, “Look how sad you made them!”

The video below is just a sample of the manipulative nonsense these networks are engaged in, but it’s an accurate representation of pretty much all of their border coverage:

On NBC’s Today, correspondent Sam Brock found a group of disappointed men who had this to say of the Title 42 decision:

“We’re sad — very sad. They told us they were going to give us an opportunity, we feel betrayed…”

“I don’t think this is fair, because at the end of the day we’re all human beings!”

Meanwhile ABC correspondent Will Carr on Good Morning America described the disappointment felt by “mothers and kids who were sleeping on the sidewalks.”

On CNN, correspondent Leyla Santiago translated for a Venezuelan woman who was similarly disheartened by the news. “She says it feels bad,” Santiago remarked sadly.

None of this is journalism. Reporters don’t go around talking exclusively to people who were negatively impacted by a government policy, or shoving downcast faces in front of cameras to bully viewers into adopting a particular viewpoint. That’s emotional manipulation and activism.

On networks like CNN and NBC, nobody ever bothers to ponder whom should or should not be allowed into the U.S. Because for them, the answer is always: everybody.