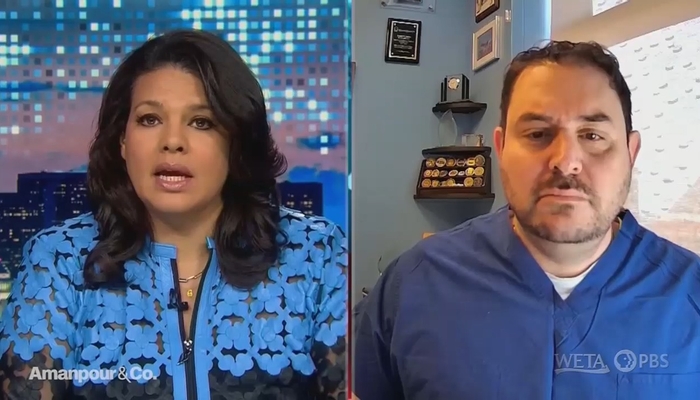 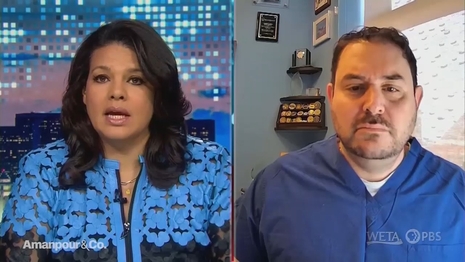 On Friday’s Amanpour & Co., fill-in host Sara Sidner devoted a segment to promoting the agenda of a gun control advocate and made no serious effort to challenge her liberal guest’s claims.

In the pre-recorded interview with Dr. Joseph Safran which aired on PBS and CNN International, Sidner promoted such misinformation as claiming that mass shootings are “uniquely American,” and she also overstated the number of mass killings in 2022.

2022 will go down as the second highest year for mass shootings in the United States on record. That means more than 600 mass killings in the past 12 months alone, according to data compiled by the nongovernmental organization, Gun Violence Archive. The shootings come at a disturbing pace, often too fast to grasp — people going about their day suddenly gunned down in schools, supermarkets, night clubs, movie theaters, in the streets, you name it.

She soon added: “Are these tragedies preventable? And why can’t we stop this uniquely American problem?”

But, according to the website she cited, there have been 36 cases of gun-related “mass murder” in 2022, which would also include killings in private residences in addition to public places. Additionally, there are certainly plenty of other countries where homicide numbers are high.

On the subject of mass shootings in public places, Europe has had a worse problem than the U.S., which, unlike the U.S., has even included fully automatic machine gun attacks.

After her guest predicted that there is a greater chance of passing more gun control now than after Sandy Hook, Sidner lamented that not enough has been done already in her opinion:

Yeah, we’ve just passed the 10-year anniversary of Sandy Hook, and it was the moment in time when everyone thought that gun control reforms would be put in place, and yet, frankly, very little, most people can agree, has been done…

She soon claimed that “when there was a ban” in assault weapons, “the numbers show that the number of people who died from gun violence did go down” even though studies have found that the assault weapon ban of the 1990s had little impact.

In the 1990s, the overall number of homicides dropped because of an increase in prison sentences for repeat offenders, while it is also the case that the overwhelming majority of gun-related homicides are committed using handguns.

She ended up allowing her guest to repeat discredited claims that 97 percent of Americans support “universal background checks.”

It was also not mentioned that schools that allow teachers to be armed have a better record of deterring mass shootings.

This segment was paid for in part by the Anderson Family Fund and by viewers like you. You can fight back by letting advertisers know how you feel about then sponsoring such content.

SARA SIDNER: 2022 will go down as the second highest year for mass shootings in the United States on record. That means more than 600 mass killings in the past 12 months alone, according to data compiled by the nongovernmental organization, Gun Violence Archive. The shootings come at a disturbing pace, often too fast to grasp — people going about their day suddenly gunned down in schools, supermarkets, night clubs, movie theaters, in the streets, you name it. It’s senseless bloodshed that raises this question every single time: Are these tragedies preventable? And why can’t we stop this uniquely American problem?

You know, according to Gun Violence Archive, more than 600 mass shootings in the U.S. this year, and you mentioned those at schools. We saw the devastating shooting in Uvalde at a school, and you’ve really traveled the world and — with your work — and you know this is a uniquely American problem. But there has been a bit of progress this year, and I want to sort of go down a few of the things and see what your take is on them.

There is a bipartisan effort that saw the passage of the Safe Communities Act, which brings tougher background checks. It closes a so-called “boyfriend loophole” by blocking gun sales to those who are convicted of abusing their partners — unmarried partners– and more funding to mental health. Is that enough?

SAKRAN: …And then the last piece is the fact that there’s been a shift in the political, you know, momentum of what’s happening over the past 10 years. The culture of America is so much different than where we were 10 years ago at Sandy Hook where Americans are no longer willing to kind of sit on the sidelines of history as people continue to be injured and killed. And I think that’s one of the reasons that we saw 15 Republican Senators, including those like Mitch McConnell and John Cornyn, vote in favor of that bipartisan bill. But there’s still so much more that we can do.

SIDNER: Yeah, we’ve just passed the 10-year anniversary of Sandy Hook, and it was the moment in time when everyone thought that gun control reforms would be put in place, and yet, frankly, very little, most people can agree, has been done, but there has been some movement. I do want to ask you — you and a couple dozen other physicians went to Washington and had some conversations. Can you tell me what you went to do and who you talked to and the response that you got?

SAKRAN: Yeah, so in early December, Brady United as well as This Is Our Lane — which are a group of health care professionals — teamed up with March Forth and over 50 physicians to really implore the U.S. Senate to vote on an assault weapons ban before the end of the current session. As you know, the assault weapons ban was passed by the House of Representatives in July, but the U.S. Senate has yet to take it up. And so we went there to really speak with both Republican and Democratic Senators, and to really push them to pass this.

And the reason this is so important is this is one of the many solutions to tackle this public health problem. We know that assault weapons are uniquely lethal because of their rapid rate of fire and the high muzzle velocity. And, in fact, when you look at shootings where assault weapons or high-capacity magazines are used, 155 percent more people are shot, and 47 percent more people are killed. So we really want them to get this done and get it done before the current session ends. And that’s what we went there to do.

SIDNER: What kind of response did you receive? Because we have not seen that ban. Although, when there was a ban, the numbers show that the number of people who died from gun violence did go down.

SAKRAN: Yeah, that is correct. I will tell you that I think both on, you know, the Democratic side and the Republican side. No one wants to see children being killed. We had very positive responses. And we think that this is an opportunity right now for the U.S. Senate to be able to act to ensure that we finally start putting the safety of our children first. The reality is, is that, you know, this is, you know, one part of many different things that need to happen. But it’s a critical part, and we saw that 10-year ban actually make a difference, and so we need to reinstate it.

SIDNER: Can I ask you, do you think that the surgeon general should act and call this a public health emergency since we just talked about this is the number one killer of children, gun violence?

SAKRAN: Yeah, that’s such an important point, Sara. Look, we have called on the surgeon general to put together a report on gun violence prevention and name it as a public health crisis. We know historically when we’ve seen other different reports such as the tobacco report and so forth, this actually does make a difference. And it’s so critical to call it what it is.

And so this is an opportunity again to really have, you know, the office of the surgeon general, right, come out front and use the bully pulpit to talk about this similar to how we talk about opioids and, you know, mental health, you know, crisis and loneliness. All those aspects are important, but so is gun violence prevention.

SIDNER: People in many other nations do not understand what is happening here when it comes to gun violence and when it comes to the lack of gun control in comparison to what things — how things stand in other nations. What is the problem? I know that you have a mantra — it is — “This is not a Democratic problem — this is not a Republican problem — this is an American problem.” What do you see going forward when you’re going to have a Democratic Senate and a Republican House. Do you see any possibility of further movement to try to safeguard children from firearms?

SAKRAN: Yeah, so, look, when you look at our country, you’re right. This is a uniquely American problem. And, you know, with four hundred, you know, million plus guns in America, the reality is, is that what we are looking for and searching for is for responsible gun ownership and to ensure that children can go to school without the fear of being shot — that people can go to places of worship worrying that they’re going to be gunned down. And when you think about what is at the center of this problem, it’s access to firearms.

SIDNER: I want to speak from the side of those who are very much into having guns and using guns, whether it be for hunting or for sport, and what you hear often times from them is, “Guns don’t kill people — people kill people.” How do you respond to that?

SAKRAN: Yeah, I mean, I think that is a common, you know, just, you know, rhetoric that we continue to hear. The reality is, is what we focus on, right, is about responsible gun ownership is about safety.

And we know when you look at the different types of gun-related injury that exists, there is so much opportunity for us to move that needle forward by doing things that expand the Brady background check — which 97 plus percent of Americans agree upon — by ensuring that we prevent guns from being trafficked into communities — by investing in communities to break the generational cycle of violence — by incentivizing states to require safe storage of firearms — and, like we’ve talked about, by reinstating the ban on assault weapons and high-capacity magazines.

So that is like going to be so critical, and that’s a piece that allows us to really take a public health approach to this problem, similar to what we have done, Sara, with so many other public health issues.