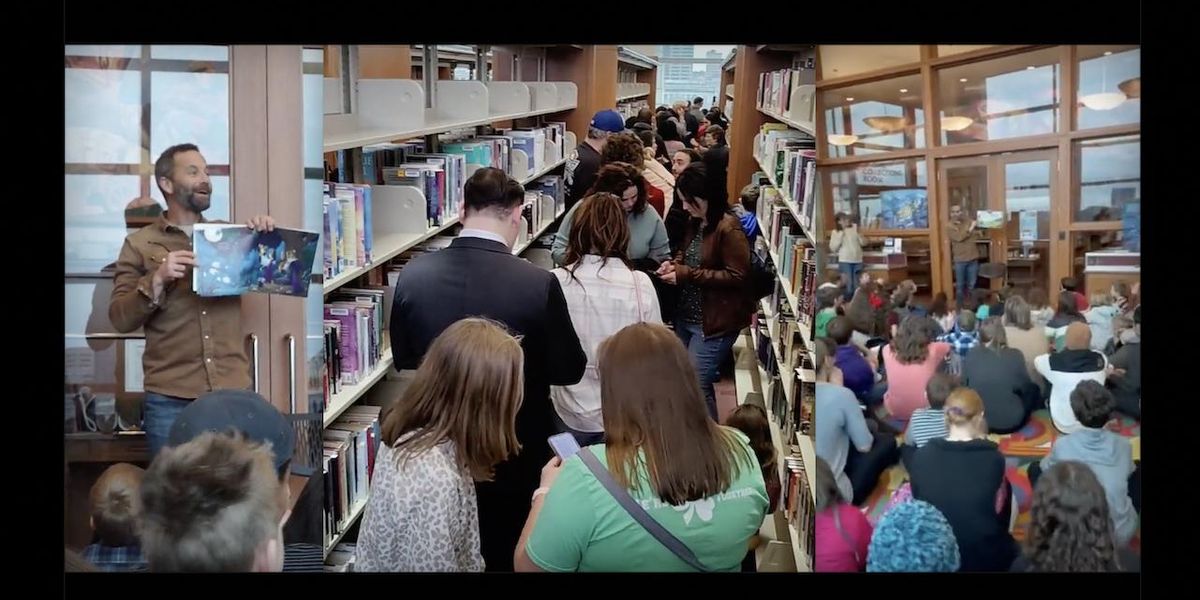 It was a mob scene Thursday at Kirk Cameron’s reading of his God-focused children’s book at the Indianapolis Public Library — except this mob didn’t do what mobs do; rather it was just smiles, cheering, and laughter all around.

u201cThis is a message to every library in the United States: nnIn 137 years of the Indianapolis Public Libraryu2019s history, NEVER ONCE have they had over 2,500 people show up to a single event. nnUNTIL TODAY.u201d

u201cAt this point most are staying in line upstairs. Some are going downstairs. It’s not clear when or if there will be an additional reading. Folks are singing in the aisles awaiting direction. An announcement was made on the intercom but couldn’t hear. @KirkCameron @indylibraryu201d

Brave Books — Cameron’s publisher for his “As You Grow” children’s book — earlier this month said
two public libraries agreed to let him do readings for kids after initially saying no to the actor and outspoken Christian.

Cameron
told Fox News Digital he “won” after challenging the libraries’ denials and threatening to “assert” his “rights in court” — not to mention the libraries hosted drag queen story hours in June, according to the cable network.

One of the libraries to agree to Cameron’s reading was the Indianapolis Public Library; the other was Scarsdale (New York) Public Library, where Cameron was scheduled to do a reading Friday.

Check out Cameron addressing the huge crowd at the Indy library:

“You guys! They’re gonna let me speak over the loudspeaker, the PA, because there’s about 1,000 people in the library on other floors that haven’t gotten up here, so I’m gonna be talking to everybody in just a few minutes, and I just wanna thank them for coming and thank you for coming and making this such a special event today!”

u201cWow! What an incredible turnout!nnThank you to everyone who gave up their morning to join us in Indianapolis!nnWe are so humbled & thankful for your support!nn@KirkCameronu201d

One attendee tweeted that “library staff has informed patrons that there will not be room for all guests to enjoy the book reading. As you can see, the building appears well beyond capacity.”

u201cLibrary staff has informed patrons that there will not be room for all guests to enjoy the book reading. As you can see, the building appears well beyond capacity. @KirkCameron @indylibrary #childstoryhouru201d

u201c@BraveBooksUS @KirkCameron Story time was great today! I think the best part for adults was listening to the librarian say there were too many people on the 6th floor & ask parents to bring the kids to a different floor for a different activity ud83dude02 We all wanted Kirk’s story time!u201d

u201cQuite the line to see @KirkCameron in Indy! I would suggest @indylibrary failed to serve the needs of its’ constituents by not having this event downstairs. But God is good and all are still welcome in the small room!u201d

Over 50 public libraries across the U.S. either rejected Cameron’s requests for a story-hour program for children or did not respond to his publisher’s inquiries, Fox News said, citing Brave Books.

Initially, the Indianapolis library employee who spoke to Brave Books about Cameron’s reading said, “We are really looking at authors who are diverse. Authors of color. That’s really been our focus,” the cable network reported.

When Brave Books countered that Cameron’s book also adds to diversity of ideas and beliefs, the library representative replied, “Well, we are focusing on racial equity,” Fox News said.

Fox News Digital said it reached out to both libraries for comment.