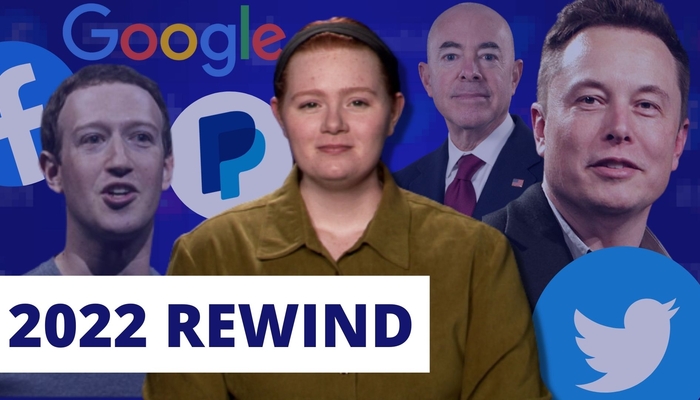 2022 was quite the year for free speech. Before we officially enter the new year, let’s take a look back at the top seven best – and worst – free speech moments of 2022. This is not intended to serve as a ranked list, but to highlight the seven most prominent stories highlighting Big Tech censorship throughout the year.

The Biden Administration Pilots the Disinformation Governance Board

The Biden administration quickly flexed its anti-free speech muscles through its introduction of the Disinformation Governance Board (DGB), which was designed to combat so-called misinformation.

However, the Biden administration indicated that we have not seen the last of the Disinformation Governance Board. A Homeland Security Advisory Council report claimed the DHS “can and must” still work to counter so-called disinformation “consistent with the law and best practices.”

Using our exclusive CensorTrack database, the Media Research Center quantified the true harms of censorship through our “Secondhand Censorship” report.

MRC Free Speech America revealed that censorship not only impacts the individual censored but also every user who followed the censored account.

PayPal also seemed to take a swing at free speech when individuals and groups such as Gays Against Groomers, UsForThem and the Free Speech Union said the payment processing site shut down their accounts or froze their funds.

The payment processing site’s alleged censorship put the true harms of censorship on full display by withholding funds from organizations.

If Big Tech companies continue to target individuals, small businesses and organizations simply because they don’t agree with what they have to say, then Big Tech becomes no better than a totalitarian social credit system.

MRC Free Speech America researchers also analyzed the 36 top House races, only to find that Google showed no bias against Republicans in those races, where polling showed the House was widely expected to fall under Republican control in the next Congress. A third study exposed Google for burying candidates who have aggressively acted against Big Tech, either legislatively or vocally, and attempted to manipulate undecided voters in the Georgia runoff Senate race.

Is there any other way to describe Google’s actions other than an attempt to interfere in American elections?

In a win for transparency and free speech, the states of Louisiana and Missouri sued government officials for conspiring with Big Tech to censor free speech under the pretext of fighting so-called “misinformation,” “disinformation” and “malinformation.”

On an episode of Rogan’s podcast, Zuckerberg admitted that his platform censored the bombshell New York Post Hunter Biden story after the FBI told the platform to “be on high alert” for “some kind of dump” of “Russian propaganda.”

That would not be the last time we heard of government collusion with Big Tech companies in 2022.

The various installments of the Twitter Files detailed the ongoing relationships of Big Tech platforms with federal government agencies, including the CIA and FBI.

Twitter’s new owner Elon Musk tweeted about the Files, “Most people don’t appreciate the significance of the point Matt was making. *Every* social media company is engaged in heavy censorship, with significant involvement of and, at times, explicit direction of the government.”

Hopefully, Musk and the new leadership at Twitter will continue their commitment to transparency and implement pro-free speech policies on the platform.

As we enter the new year, help us continue to fight against those who wish to silence anyone who disagrees with radical leftist ideology.

Visit CensorTrack.org to stay updated on free speech news or check out some of our previous episodes of CensorTrack with Paiten:

Conservatives are under attack. If you have been censored, contact us at the MRC Free Speech America contact form on CensorTrack.org, and help us hold Big Tech accountable.

Sen. Ted Cruz Says FBI Should Search Hunter Biden’s Home for Classified Docs
The Lancet, which scammed the world by publishing a rigged study against ivermectin, now says climate change is a “medical emergency”
CEO apologizes for including Martin Luther King Jr. quote in email announcing layoffs: ‘Inappropriate and insensitive’
Activists are outraged at Arizona bills that would limit and regulate drag shows
Florida man caught on viral video beating his dog gets 3-year prison sentence and is forbidden from owning any animals