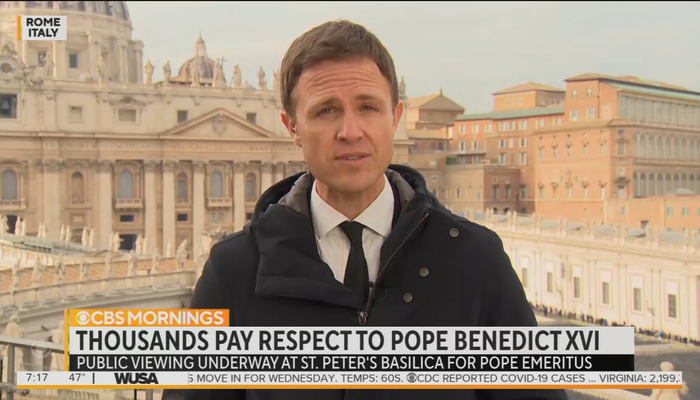 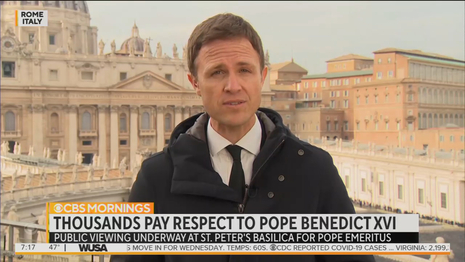 All three broadcast morning newscasts devoted full stories on Monday to the first day of public viewing for the late Pope Emeritus Benedict XVI. CBS’s Chris Livesay was the most antagonistic to Benedict’s legacy, regurgitating once again the “God’s Rottweiler” epithet, and tagging Benedict as an “arch-conservative” vs. the merely “more liberal” Pope Francis.

Livesay suggested Benedict created friction by his mere presence in the Vatican after he retired: “Having two men wearing white created the impression of two competing ideological camps — Francis the more liberal, Benedict the arch-conservative.”

But over on ABC, correspondent Terry Moran — who tagged Benedict as “a conservative icon” — rejected that premise: “When Pope Benedict resigned, he pledged unconditional obedience to his successor, and he kept that promise. It could have been awkward; there were those among conservatives who tried to use him to parry the efforts of progressive Pope Francis, but Pope Francis said it was like having an old grandfather living on the premises….”

NBC’s report, from correspondent Molly Hunter, mostly hewed to recounting the events of Monday; her only nod to the ideological fissures in the Church came when she described Benedict as “a man who held a wildly different world view” than current Pope Francis.

Here’s a video excerpt from Livesay’s report, followed by the complete transcript from the January 2 edition of CBS Mornings, as well as partial transcripts from ABC’s Good Morning America and NBC’s Today (click expand):

ADRIANA DIAZ: At the Vatican, it is a day of mourning for Pope Benedict XVI, who died Saturday at age 95. Thousands filed past the Pope Emeritus’ body as it lay in state at St. Peter’s Basilica. He’ll be buried by his successor, Pope Francis, on Thursday. Chris Livesay is in Rome. Chris, good morning.

CHRIS LIVESAY: Good morning, Adriana. I’ve just been to see the body of Pope Benedict lying in state, as are the thousands of people lining up behind me at St. Peter’s Basilica. He’s wearing red and gold vestments, flanked on both sides by Swiss guards. There’s organ music playing, also solemn singing. It’s precisely the type of setting you would expect for a papacy marked by his orthodoxy, but not without his contradictions.

He was known as a traditionalist, ‘God’s Rottweiler,’ for fiercely adhering to church doctrine. But Benedict’s papacy was a papacy of firsts. Despite his failures, during a 2008 trip to the U.S. he was the first Pope to meet with victims of sex abuse and to publicly apologize, condemning what he called filth in the Church. And in his most defining act, Benedict was the first Pope to resign in six centuries — recognizing, he said, his incapacity to fulfill his ministry due to the strain of old age. 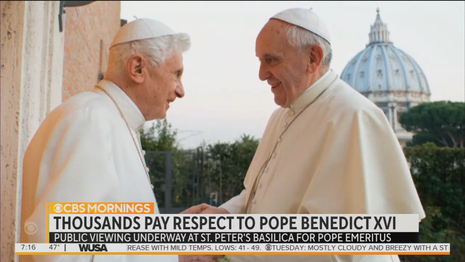 While he made a majestic farewell over the eternal city in his exit from the papacy, he never exited the Vatican. While Francis championed Benedict’s bravery to abdicate his power, having two men wearing white created the impression of two competing ideological camps — Francis the more liberal, Benedict the arch-conservative.

It was a mistake to step down, says Tina White from Detroit.

TINA WHITE, in St. Peter’s Square: It’s an amazing honor to be elected Pope, and you shouldn’t throw that away.

LIVESAY: But now for the first time since he became Pope in 2013, Francis is finally the only one. Now mourning his only confidante who could possibly understand what it meant to be Pope, says Jerry O’Connell, Vatican expert for America magazine. [to O’Connell] What does Francis lose with the death of Benedict?

JERRY O’CONNELL, America magazine: Francis has always been attracted to grandparents, and he’s always referred to grandparents as very important in the life of the family. He has lost a grandfather.

LIVESAY: And on Thursday, it will be Francis making history, becoming the first Pope in modern times to preside over the funeral of his predecessor. We’re told by the Vatican it will be a simple and somber affair, exactly how Benedict wanted.

TERRY MORAN: Behind me here in St. Peter’s Square it’s already quite a scene — thousands of people are lining up, and down the street as well, to pay their final respects to Pope Benedict XVI, a conservative icon in the Church who nevertheless transformed the papacy with a radical act: resigning from it.

This morning the body of Pope Emeritus Benedict XVI was moved to St. Peter’s Basilica. The faithful are already gathering to pay their respects. Benedict died Saturday morning in the monastery on the grounds of the Vatican where he had lived quietly since stepping down as leader of the Catholic Church back in 2013. Benedict’s final words, “Lord, I love you,” spoken in Italian in his last hours, according to his longtime secretary. 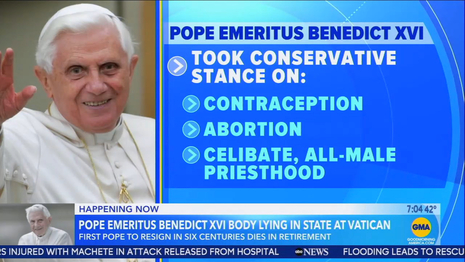 Born Joseph Ratzinger in 1927 in a small town in Germany, Benedict grew up in the shadow of Hitler’s Nazi rule, and he entered the priesthood following World War II, becoming a leading theologian and teacher of the faith, rising to the rank of cardinal. Elected in 2005 as the first German pope in nearly a thousand years, Benedict was a deeply committed traditionalist, championing conservative stances on contraception, abortion, and a celibate, all-male priesthood.

And when Pope Benedict resigned, he pledged unconditional obedience to his successor, and he kept that promise. It could have been awkward; there were those among conservatives who tried to use him to parry the efforts of progressive Pope Francis, but Pope Francis said it was like having an old grandfather living on the premises, someone to whom he could turn for for advice and counsel.

MOLLY HUNTER: In his first mass of the new year, Francis paying tribute to a man who held a wildly different world view, expressing gratitude, urging the faithful to join together with one heart and one soul. Benedict’s complicated legacy, roiled by the Catholic Church’s massive sex abuse scandal: a serious theologian, a powerful intellectual, a traditionalist who broke with centuries of tradition by retiring in 2013….