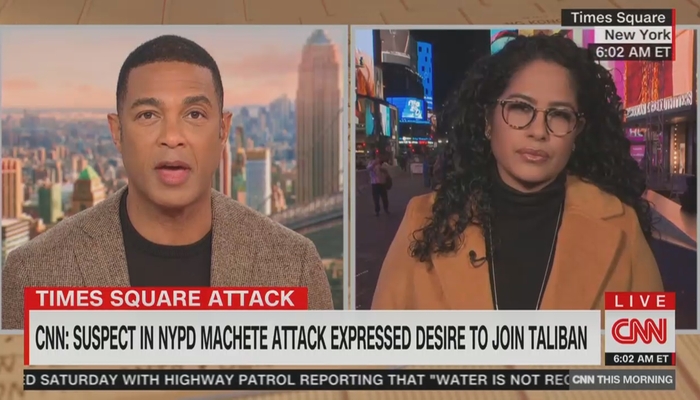 “Do we know anything about the suspect’s condition? I mean, the officers’ condition, I should say?”

Yeah, you should say, Don. But you didn’t. Betraying liberal media instincts, on today’s CNN This Morning, Don Lemon first asked the reporter covering the New Year’s Eve attack machete attack on three NYC police officers about the condition of the suspect. Then— perhaps realizing that his concern for the suspect over the officers wouldn’t play well in much of America—Lemon tried to cover his tracks.

First, Lemon explained “We have learned that the 19-year-old suspect, who injured three police officers, carried a handwritten diary in which he wrote of his desire to join the Taliban in Afghanistan, and die as a martyr!”

And then there was the typical liberal-media feigned confusion over an Islam-related attacker’s “motive.” CNN law enforcement analyst Jonathan Mackrow explained authorities are asking, gee, ”What was the motive here of this 19-year-old suspect who’s now in custody, what was he doing? What was his intent?”

Poppy Harlow sounded a note of relative reason, saying that although “it depends on how extensive his writings are,” even so, the suspect’s diary saying he had a desire to join the Taliban “will help a lot in terms of trying to get to a motive.”

Note: Lemon expressed a giddy excitement about the incident. Speaking with the law enforcement analyst, Lemon called the attack “crazy!” Don did stop short of calling it “cray cray.” 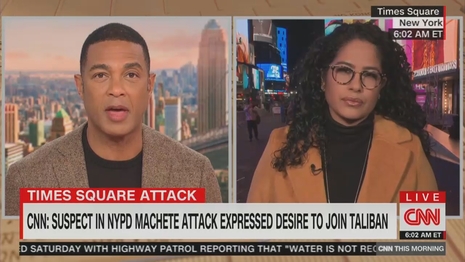 On CNN This Morning, Don Lemon asking first about the condition of a alleged machete attacker rather than that of the police officers he injured was sponsored in part by Subway, Pfizer, maker of Robitussin, and Whole Foods.

DON LEMON: We’ve got to start with this. There are some new details coming in this morning on the New Year’s Eve machete attack near Times Square. We have learned that the 19-year-old suspect, who injured three police officers, carried a handwritten diary in which he wrote of his desire to join the Taliban in Afghanistan, and die as a martyr!

Now, law enforcement searched the attacker’s home in Maine on Sunday. He remains in custody in New York, but has not been formally charged.

So, joining us now from Times Square CNN’s is Gloria Pazmino. Gloria, good morning to you. This is a frightening story. What are investigators looking for, looking into at this hour?

PAZMINO: That’s right, Don, good morning. We are learning more about that suspect, Trevor Bickford as you said, from Maine, who law enforcement sources tell us officers tell us traveled to New York City last week, and then approached the area near Times Square on Saturday, on New Year’s Eve, and tried to get into this area where I’m standing right now, which was highly, highly secured because of the New Year’s Eve celebration.

He approached one of the security checkpoints, and he approached a police officer and tried to attack him with a machete. He then tried to strike another officer, and that’s when a third officer that was also on the scene fired a shot from his service weapon and injured the suspect, Trevor Bickford, in his shoulder.

Now, we are also learning, according to law-enforcement sources, that Trevor Bickford was carrying a diary that, where he had handwritten notes about wanting to join the Taliban in Afghanistan. And he expressed a desire to die as a martyr.

Law enforcement sources also telling us that they are trying to figure out both at the U.S. Southern District here in New York whether he will be charged federally or state law. The Manhattan district attorney also looking into this.

LEMON: Gloria, do we know anything about the suspect’s condition — I mean, the officers’ condition, I should say?

PAZMINO: The suspect is recovering in the hospital, but Don, the three officers also recovering. One of them had just graduated from the academy last week. Times Square was one of his first assignments. He is in good spirits. We heard about the officer from Mayor Eric Adams yesterday, early morning, who visited with those three officers after they were injured in that attack. They are all expected to make a recovery.

LEMON: It is horrifying. Gloria, thank you very much, we appreciate that.

I want to bring in now CNN law enforcement analyst Jonathan Mackrow. Good morning to you. This is, I mean, it’s crazy!

POPPY HARLOW: The fact that they have the diary, and what we know of it says that he had this desire to join the Taliban. Of course, I guess it depends on how extensive his writings are within that diary, but that seems it will help a lot in terms of trying to get to motive.