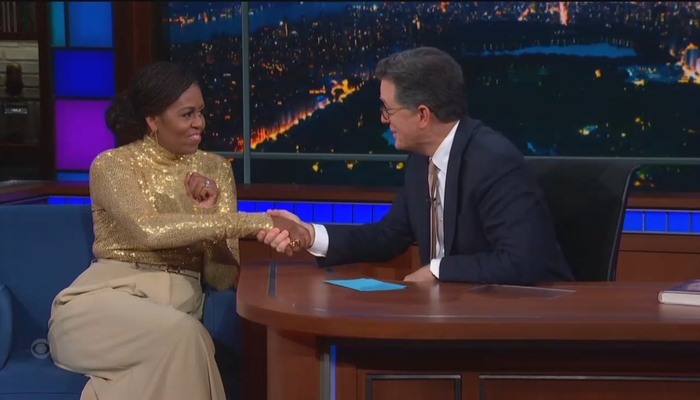 Stephen Colbert kicked off the new year by welcoming Michelle Obama back to The Late Show on CBS to pressing the former first lady with tough questions such as “what is the best sandwich?”

In reality, the segment was almost certainly filmed for Obama’s November 14 appearance. She was wearing the same gold outfit and was already seated beside Colbert’s desk without an introduction when the segment began. Eagle-eyed viewers could notice Colbert’s tie change colors.

Production trickery aside, Colbert introduced the idea for this segment, “the team, up on the 75th floor, have put together these scientifically-engineered questions that are– a team of psychiatrists have written these questions that are, that are meant to actually penetrate the soul of someone, to truly reveal them for who they are.”

After Obama at least had the common decency to prefer oranges to apples, Colbert kept the hardballs coming with questions like:

All kidding about Obama’s favorite foods aside, “The Colbert Questionert” shows why Democrats eagerly agree to join Colbert and his fellow late night hosts. It’d be one thing if the comedians also asked these type of silly questions after some genuinely challenging questions or invited Republicans on to do the same, but they simply don’t.

STPEHEN COLBERT: And so, here at the, at The Late Show, the team, up on the 75th floor, have put together these scientifically-engineered questions—

COLBERT: that are– a team of psychiatrists have written these questions that are, that are meant to actually penetrate the soul of someone, to truly reveal them for who they are–

COLBERT: –Merely by answering these questions.

COLBERT: Michelle Obama, do you have the courage to answer The Colbert Questionert?”

COLBERT: Michelle Obama, what is the best sandwich?

COLBERT: You put butter on the outside? How are you doing it?

OBAMA: Oh, yeah. Oh, yeah. You butter it. It’s got to be crisp. And the cheddar– I like cheddar, in my grilled cheese, yeah.

COLBERT: Nicely done, nicely done. What’s the one thing you own that you should really throw out?

OBAMA: Oh! It would be some clothes. Yeah, I have too many of them, according to my husband. Yes.

COLBERT: What is the scariest animal?

COLBERT: Okay. Have you ever—

COLBERT: COLBERT: Snakes. Snakes, spiders. Is there– have you ever encountered a dangerous snake?

COLBERT: Rattlesnakes, that sort of thing?

OBAMA: Like, a king– some kind of cobra, kind of… It wasn’t, couldn’t have been a cobra.

OBAMA: It was supposed to be a poisonous snake, and the secret service saw it ahead. So they stopped me, and—

COLBERT: They wrestled it.

OBAMA: They said, “Ma’am, you’ve got to stay here.” Oh, we were on a hike and a rattler came out and went across the road. Yes.

COLBERT: Wow. And they arrested it.

COLBERT: I told you they’re tough.

COLBERT: What? They are refreshing. Great source of fiber.

COLBERT: Have you ever asked someone for their autograph?

OBAMA:  No! I mean, I don’t– yeah! I generally think that getting somebody’s signature is kind of like– what do you do with that?

COLBERT: What do you think happens when we die?

COLBERT: I’ll miss you. I will! Think of me.

COLBERT: Think of me. Put in a good word.

COLBERT: Sure. That’s an action movie. The Rock in Jumanji yeah.

COLBERT: Oh yeah. Have you seen the new one?

COLBERT: That’s a good one. Window or aisle?

COLBERT: Okay. Because you like the view. There you go.

OBAMA:  Yeah. Who likes that?

COLBERT: Classic. It’s up there with rattlesnakes. Classic.

COLBERT: Most used app on your phone?

OBAMA:  Sonos. Music. I play music all the time.

COLBERT: I dig it. What do you listen to a lot of these days?

OBAMA:  You know, I am really revisiting Stevie Wonder’s fulfilling his first finale. So, classic. Yeah, I’ve been kind of grooving on that. Just bought Tank and the Bangas’ new album, “Red Balloons.”  ”Renaissance,” Beyoncé. My girl.

OBAMA:  Dogs. I love the way they’re into– you guys are into it. You’re good.

COLBERT: Yes. You only get one song to listen to for the rest of your life. What is it?

COLBERT: Now wait a second. I know, I know, but this—

COLBERT: Well, here’s the thing, is you don’t have to listen to it continually.

OBAMA:  See, that just makes me sad thinking about it. I’m on an island–

COLBERT: So what’s the song that keeps you from being sad? Because it’s not like you have to listen to it continually, but when you do go, this is the song.

OBAMA:  All right. I have to go with Stevie, and it’s not even an album? It’s just one song?

COLBERT: What number am I thinking of?

COLBERT: No. Describe the rest of your life in five words.

COLBERT: Congratulations! Michelle Obama, you are known. Thank you.