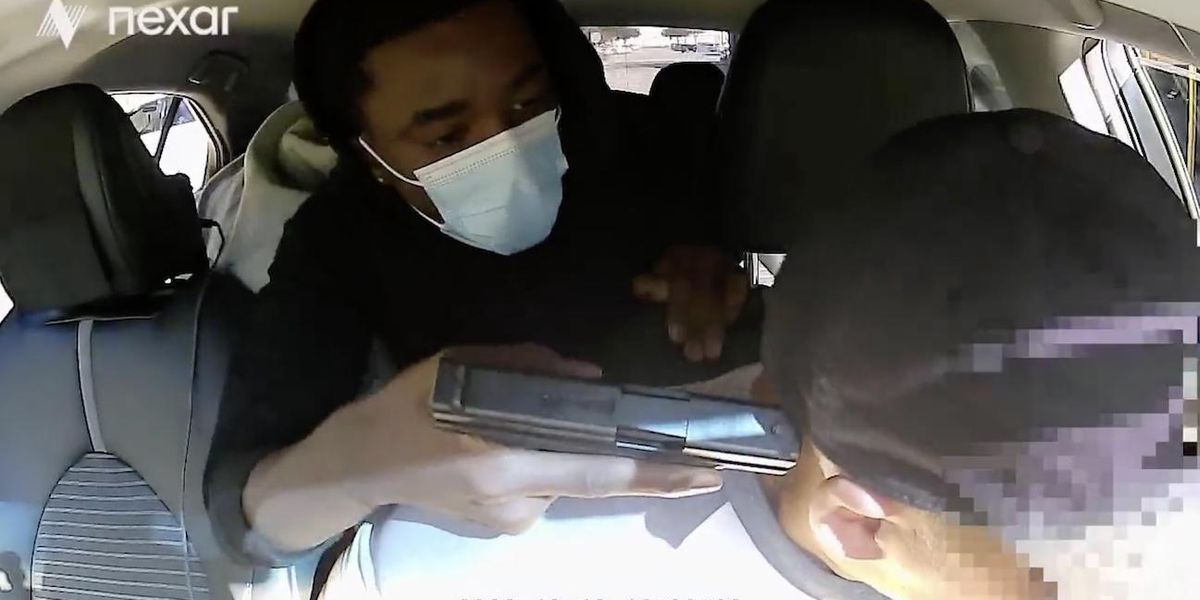 Video captured inside a vehicle in Houston shows a carjacker pressing a gun against an Uber driver’s head and ordering him to “get out before I kill you!”

However, KRIV-TV reported that the driver wasn’t about to let the crime proceed without a fight.

KRIV said the driver — named Dovran — picked up two riders around 4 p.m. near Westheimer and South Voss Roads. The station said that during the ride, the pair changed their drop-off location to an apartment complex on Dunvale Road.

But when the driver reached that location, things turned violent, KRIV said.

One of the suspects — who wasn’t wearing a mask over his face — reached forward and tried to grab Dovran’s phone.

Then the second suspect — who was wearing blue surgical mask — took things further.

“The second one put a gun to my head,” Dovran recalled to the station.

At that point, the first rider is seen exiting the vehicle — and Dovran told KRIV that the first rider “pulled the driver’s door, and tried to pull me out, but I was holding tight.”

Despite a gun being held to his head, Dovran battled back.

The station said a struggle ensued, and Dovran managed to drive off — except the gunman was still in the back seat.

“He was holding a gun to my head, he was screaming, ‘Stop the car, or I’ll shoot you,'” Dovran recounted to the station. “I didn’t stop, and then lucky for me, he decided to jump out.”

Here’s video of what unfolded in the car. Content warning: Language:

u201cDRAMATIC VIDEO!! We need your help to identify the suspects wanted in an armed robbery of a rideshare drive on Oct. 18 at 2929 Dunvale.nnIf you recognize them, please call @CrimeStopHOU w/info. @houstonpolice nnFull story at https://t.co/eJba6a6DG5u201d

KRIV said Dovran sustained only a few scratches, and a station reporter asked him how he managed to fight back and refuse the carjacker’s orders with a gun pressed against his head.

“I don’t know, I didn’t think about it,” he told the station, adding that it still was “scary.”

Asked if he’d do anything differently with hindsight, Dovran told KRIV, “No.”

Dovran still drives for Uber but told KRIV he’s being more cautious about whom he picks up and where he does it.

Crime Stoppers is offering $5,000 for any tips leading to the suspects’ arrests, the station said.

The station said Uber issued the following statement: “The actions of the riders shown in the video were chilling to watch, and we are grateful the driver wasn’t injured. We removed the rider’s [sic] access and have reached out to the driver to offer support. We look forward to assisting police in identifying those responsible.”

KRIV noted that Uber recently rolled out a rider verification feature to add an extra layer of protection for drivers, saying that if a driver feels unsafe, the driver can end the ride immediately.

Searching for Love? Delete the Apps and Try Home Depot
Several Ukrainian officials sacked amid escalating crisis in Europe’s most scandalous country
Ex-Prisoner ‘Shaking With Fear’ Over Transgender Females In Women’s Prison
Woman allegedly met 87-year-old Holocaust survivor on dating site, conned him out of millions that she blew on luxury items
Double amputee, who reportedly lost his legs after encounter with police in Texas, shot and killed by police in California