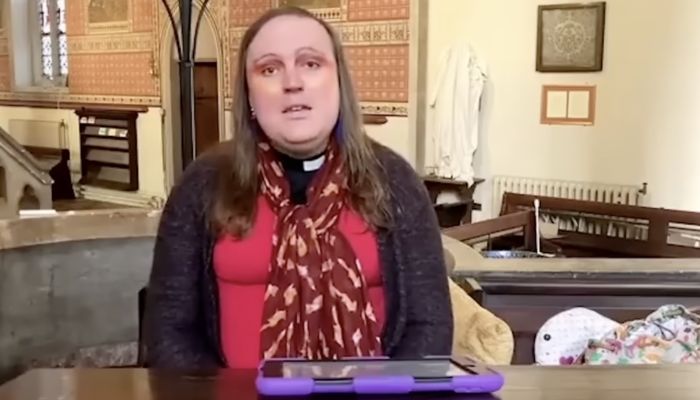 The first “gender-queer” priest in the Church of England is hoping to use her (his?) priesthood title to reach LGBTQ youth. Reverend Bingo Allison (yes, that’s the name we’re working with here) wants to “normalize [transitioning] for children.”

Allison, 36, was born a male but identifies as non-binary and dresses in female attire, including makeup and earrings. He also has a wife and three children and was raised in a Christian conservative household.

Apparently, while one day reading Genesis 1:27 which states “So God created mankind in his own image, in the image of God he created them; male and female he created them,” Allison discovered a “new truth” about gender identity and its relationship with Biblical principles.

“I properly felt God was guiding me into this new truth about myself,” Allison told the Liverpool ECHO. “One of the things that has kept with my ministry ever since is that transition and coming out can and should be a spiritual experience, as well as an emotional and social and sometimes physical one. There is something beautiful about growing into who we were created to be and growing into our authentic selves.”

Growing into your “authentic self” includes embracing who you are and who God made you to be…not the opposite, which is what Allison is doing.

To make matters worse, Allison, who says he’s inspired by LGBTQ youth, visits schools in his clerical collar to assure them that it’s OK to be transgender. Allison said he likes to get involved in the local secular LGBT groups to be a “visual representation” and make a “huge difference in normalizing it for children.”

“When I’m wearing my collar, it lets children know that is okay and that there is a place in church and the outside world for people like me,” he said.

If this gender-queer individual went anywhere near my children, I’d be pitching a fit. He has no right to use his priesthood collar (which personally I think he shouldn’t have in the first place) as a means to manipulate children into thinking that he and what he has to say is gospel.

This is wrong on so many levels.