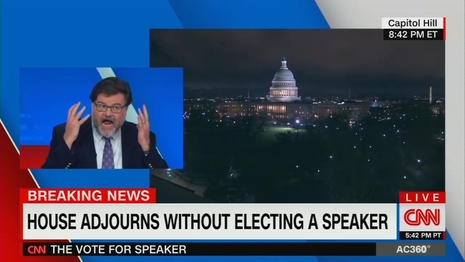 The second anniversary of January 6 is a sad occasion, because Americans should be able to agree that all riots are bad. Our news media and their heroes on the Pelosi-Picked Panel never wanted anyone to “confuse” their narrative with the race riots of 2020. They did not agree those were bad. They were a “racial reckoning.”

The anniversary collided with the ongoing drama over Republicans debating whether or not to make Kevin McCarthy the Speaker of the House.

After all the House speaker votes amid January 6 drama, CNN pundit Jonah Goldberg slammed conservatives voting against McCarthy as a RINO squish loser is a “fantasy” that “these guys are getting high on their own farts in the Fox green room.” Did we really need Trump-tweet-level toilet humor? Goldberg sounded like he wanted to be the Jimmy Kimmel of CNN.

Goldberg went on to insult NewsBusters, so we evaluate it all. We don’t want to be a hot-takes or clickbait website. Readers deserve a deeper critique of the leftist “news” machine.

We often take apart entire stories, and complain when stories are completely one-sided jeremiads, like the outrageous 60 Minutes segment on Paul Ehrlich saying civilization as we know it is just about to end. We do systematic research to underline trends, sometimes a trend over 24 or 48 hours, and sometimes a trend over one or two years. We’ll explore how the media employs words like “controversial” in a partisan way. Or “Hard right.” Or “deadly insurrection.” We break it down and provide a long-running history of media bias, going back to the Media Research Center’s founding in 1987…and before.

Bodycam Footage Matches Almaguer’s Reporting – So Why Did NBC Suspend Him?
China Is Now Covering Project Veritas’ Investigation Into Pfizer
Pro-life protester arrested at gunpoint by FBI found not guilty of FACE charges by jury
Morning Joe Ties Trumpism To Auschwitz & JFK, MLK Assassinations
Mom chases off attempted carjacker who nearly drives away with her child in vehicle: Video